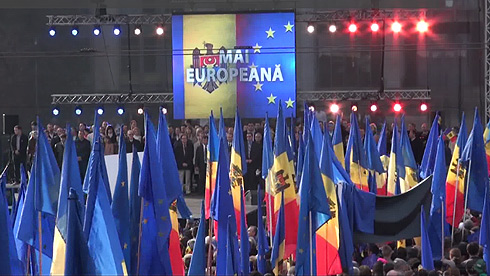 Europe is the solution

Just days before the Vilnius summit, in the course of which Moldova is to sign an Association Agreement with the EU, tensions between pro-European and pro-Russian parties in the country are riding high. For a Romanian columnist, it is a deadlock that can only be broken by the prospect of accession.

| "More European": one of the slogans at the November 3 demonstration in Chişinău.

The November 3 demonstration in Chişinău was a success, something that Romanian-speaking Moldovans had not experienced for a long time. Especially with a Russian counter-attack in the former Eastern Bloc countries, in which classic declarations of war are replaced by warnings, simmering in the background. “The winter will be very cold,” recently said [Dmitry Rogozin, Deputy Prime Minister of the Russian Federation, during a visit in the Moldovan capital].

The stated goal of the demonstration was to make public opinion and European leaders aware of the importance the Association Agreement between the Moldavian Republic and the EU to be signed at the Vilnius summit, scheduled for November 28-29. But I think that its real value is that it made the current government in Chişinău understand that it must show the world that it has the peoples’ support. Better yet, the government now understands that it needs the people.

Even when the pro-European parties regained power, after the Twitter Revolt of April 2009, the country continued to be under the control of the Communists [who exercised their veto powers in the Parliament, and organised street demonstrations, for example]. The pro-Europeans are unable to rally the rural vote, are dependent on public radio and television and are supported only by a young, urban electorate – often in flux [over one million Moldovans live abroad out of a population of four million]. And they have not done much better when it comes to economic policy, which has given the Communists the opportunity to fuel both the nostalgia and the desire to retain Moldova in Russia’s shadow. For Moldovans back home, the European Union is an abstract notion while Russian “weather alerts” are a reality that chills them to the bone.

Paradoxically, the pro-European orientation of Romanian-speaking Moldovans was misunderstood, because some of the slogans were in favour of a union with Romania. It is understandable that most Moldovans want an end to state sponsored falsehood centred around Moldovan, and not Romanian, identity imposed by the [pro-Russian] Communists. But the disappearance of the lie does not automatically imply unification with Romania. Romanian-speakers in Moldova must support European integration rather than unification because the unification message puts both Romania and the European Union in an awkward position.

Dangers of a pro-unification message

At the EU and NATO levels, there are treaties recognising the River Prout border. Neither the EU nor NATO will look kindly at the idea of a union of Romanian-speaking states on either side of the Prout as this would violate the treaties and create a dangerous precedent for European stability. Trotting out the unionist message will have a major impact on the pragmatic policies that the EU and Romania are beginning to implement in favour of Moldova (such as opening the EU market to Moldavian wines, opening a gas pipeline between Romania and Moldova, and awarding Romanian citizenship to Moldavian citizens from whom it was abusively withdrawn by the Communist regime).

The only way for the two Romanian-speaking countries to be part of the same political unit is for Moldova to be integrated into the EU. For the time being, it will not do to push too hard. No one knows what the situation will be like in 15 to 20 years and perhaps what seems risky today will seem normal then. How many people in the 1960s believed in German re-unification? Yet, it was achieved when the political climate became favourable.

Moldavia’s path to European integration is a long one, but some progress is starting to emerge. What remains for the Chişinău government to do, beyond economic measures, is to communicate and to mobilise the population in favour of the integration effort. As I said earlier, it has to show that it is backed by the people. Russia knows, from its post-Soviet experience, that you can beat an army but not a people. The European Union will be closer to the potential problems of this nation when it is composed largely of EU citizens.

Not everyone agrees with integration into the EU

“Whatever else is said about it, the number one goal of the [November 3] event was to discourage the Moldovan Communist Party (in opposition) and Russia,” writes Ziarul Naţional, in Chişinău. The paper takes issue with the “reserved and even hostile” attitude of pro-Communist or pro-Russian politicians, opinion leaders and Moldovan journalists , who —

… have accused the participants and the organisers – the pro-European ruling coalition – of paying supporters from all over the country to turn up. To forcibly assemble more than one hundred thousand people from all corners of the country is nearly impossible to pull off in a democracy…

Such a non-spontaneous mobilisation, the newspaper writes, would be possible only in “the totalitarian states, like the Soviet State or Cuba. Are our people really just a mob that can be manoeuvred about, forced to applaud a foreign cause, as some media outlets claim?”