Ideas The EU and China 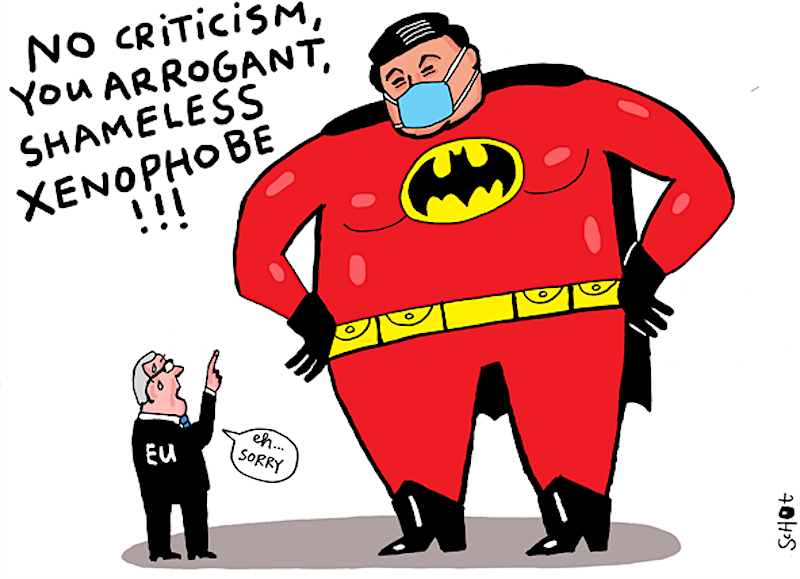 Ideas The EU and China

The EU will be able to truly make its mark when working with China only through a bold and comprehensive strategy. Talks of trade and profit must give way for more fundamental concerns, such as human rights and security. If such basic values are not upheld, EU-Chinese relations will forever be based on lies, says Volt Europa board member Joel Boehme.

All things considered, the EU-China summit that took place on 14 September went reasonably well. It contained precious few surprises, and European leaders went into the meeting with their work cut out for them. EU Commission president von der Leyen, Council president Michel, and Chancellor Merkel were all obliged​ ​to reaffirm the European positions that had been established on the previous summit. Thus, it was to be expected that the European trio repeated their deep concern over Chinese transgressions in Hong Kong and elsewhere, and referred to the lack of Chinese follow-through on market access.

The problem is that such discontent is the bread and butter of EU-China relations, and diplomatic jargon simply isn’t enough anymore. With Chinese Foreign Minister Wang Yi’s August meltdown, where he threatened the Czech Senate President with having to pay a “heavy price” for having visited Taiwan, China’s cordial mask fell off once again. After such developments, nobody needed another buzzword-coded press debrief.

Admittedly, it was a breath of fresh air to hear President Michel call for the release of the arbitrarily detained Swedish writer Gui Minhai. Going forward, it would be highly desirable to see similarly-worded condemnations of the cultural genocide in Tibet, the ‘re-education’ of uighurs, and the dismantling of Hong Kong’s democracy. Such statements would ideally go beyond progressively more frustrated press releases and open letters to the Chinese Communist Party's Central Committee. Instead, Europe needs a new, bold doctrine on how to approach the People’s Republic of China.

To begin with, this new China doctrine must call the bluff that is “One China.” The EU as a whole is the world’s biggest economy – China simply cannot afford to sever ties if we were to recognise Taiwan. By doing this, the EU would challenge the foundational myths of Chinese foreign policy, and take meaningful strides to effectively level the Sino-European playing field, which would benefit both parties in the long run.

Abandoning the One China Policy would be a tectonic policy shift. It goes without saying that it might seem far-fetched, but with Commission President von der Leyen having spoken of a “geopolitical union”, it is time to discuss it seriously. While half a sky’s worth of stars would have to align for it to happen overnight, truth must be spoken to power.

Understanding all this, we need to muster up our courage, and find it in ourselves to leverage our collective power to do good. Indeed, Europe must recognise the sovereignty of both the People’s Republic of China, and of Taiwan, independently from each other. The Taiwanese people of the Republic of China represent a beacon of democracy and human rights, with which the EU should be proud to stand and eager to do business. As Hong Kong’s democracy is being torn down, it would be beyond naive to pretend that China would treat Taiwan differently if ever given the chance. Similarly, our abject horror in such a situation would make just as little a difference as it seems to have done thus far for Hong Kong.

With China showing no signs of ceasing its flagrant human rights abuses, Europe must rally like-minded players in the region, and so seek to lend credence to its diplomatically phrased ‘concern’. The EU has the ability – and should have the determination – to demand that China prioritise its necessary trade relationship with Europe over nationalistic vanity.

Beyond reinvigorating the Euro-Taiwanese relationship, a new EU-China doctrine should put an end to other issues that currently toxify the European relationship to the People’s Republic. For example, as 5G development remains a point of contention, Brussels must unequivocally put its foot down. It is vital​ ​that European governments contract European companies over authoritarian party-state actors such as Huawei. Here as with Taiwan, Europe must call China’s bluff. China cannot afford to lose Europe, and the reason China manages to stay in the 5G game is Europe’s internal division. Here, Brussels should lead from the front and declare that European 5G providers must be prioritised over Huawei. Safeguarding our digital infrastructure is a multi-generational issue, and we must be willing to pay for it, even though it carries the potential to hinder short-term trade.

Beyond boldening its stance on the PRC, Europe must improve its overall Asian presence, which would offset China’s regional dominance. To that end, Europe should incentivise investment in other parts of Asia. it would serve as a complement to this new, more credible stance on China, and would include the pursuit of free trade agreements with actors such as ASEAN or India. While this would not decouple us from China - in itself not a realistic prospect - it would leave our supply chains just slightly less vulnerable to the whims of the CCP.

The art of possible

In lieu of a fresh China policy, the EU must stand its ground on fights that Brussels have deemed worthy of fighting. This approach would rhyme well with the takeaways of the online summit, but would require a renewed commitment to follow-through.

For example, it was entirely correct of EU leaders to push for more ambitious climate deadlines with China, but stronger action is needed. To maximise impact on China’s carbon footprint, however, the EU should impose a CO2-tax on Chinese imports - and on all imports, for that matter. If Europe wishes to walk the talk of the ‘climate ‘diplomacy’ that the European Parliament has endorsed.

Moreover, the EU urgently needs to secure an extensive investment agreement with China, which was indeed alluded to by the Europeans after the summit. European companies deserve to finally gain reciprocal access to the Chinese market. We cannot continue to be strung along, and allow China to take advantage of our favourable conditions, without them returning the favour. Thus, it’s vital that the geographical indications deal can act as a stepping stone towards China honouring their previous commitments on the matter.

To further level the playing field, the EU must also enforce European privacy and transparency standards with regards to Chinese companies present in Europe, and Brussels must make clear that going forward, it will not hesitate to name and shame identified corporate spies. Without this, cooperation will proceed only on Beijing’s terms, which should be a concern for European citizens and companies alike.

The list goes on. As established after the online summit, the key topics going forward will be climate change, economic recovery and digital policy, alongside - of course - handling the ongoing pandemic. On these topics and more, Europe must hold China accountable, even within the ramifications of diplomatic discourse.

However, it is only through a bold and comprehensive strategy, that the EU will be able to truly make its mark when working with the People’s Republic of China. Naturally, China represents a gargantuan market, and Europe must strive to cultivate a mutually beneficial relationship with them as with all international partners. At the end of the day, talks of trade and profit must give way for more fundamental concerns, such as human rights and security. If such basic values are not upheld, EU-Chinese relations will forever be based on lies.