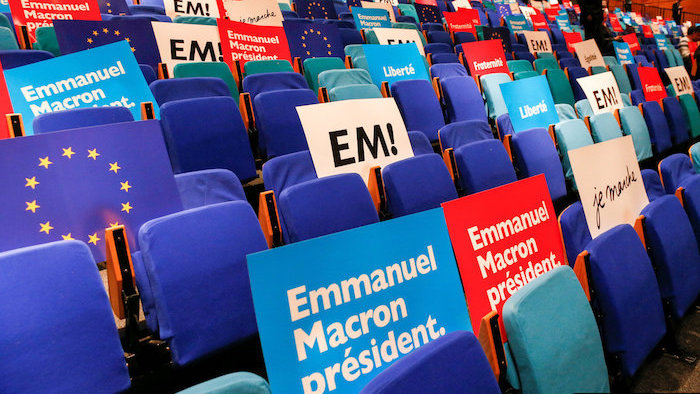 With conservative candidate François Fillon virtually out of the race following charges of embezzlement, EPP leaders are shifting their support to independent candidate and former Economy minister Emmanuel Macron.

Placards in support of Emmanuel Macron ahead of a meeting in Besançon, on 11 April.

Not long ago, Francois Fillon was considered the most likely winner of the French presidential election in May. But after he was charged for embezzlement over suspicions of fake parliamentary jobs for his wife and children, even his European allies seem to have lost hope. Meanwhile, the fear of seeing far-right candidate Marine Le Pen taking power is growing.

“People are worried, they are wondering what is going on in France,” Joseph Daul, president of the European People’s Party (EPP), told EUobserver on the margins of the EPP congress in Malta at the end of March. “And it goes further than that. There are already committees, at the highest level, working on the hypothesis that France leaves the euro and the EU,” he said.He declined to specify whether these working groups were in EU capitals or in the EU institutions.

Officials in Brussels have warned about the consequences for France and the EU if Le Pen were to be elected, but have said so far that that they do not want to envisage a Le Pen scenario. The National Front (FN) leader has said that she wants to “do away with the EU,” and has promised to organise a referendum on the country’s EU membership.

Her possible election “has been a risk for some time,” a high level EU source said recently, pointing to the “explosion” of the two main parties, the Socialist Party (PS) of outgoing president Francois Hollande and Fillon’s Republicans. In most of recent polls, Socialist Party (PS) candidate Benoit Hamon was […]