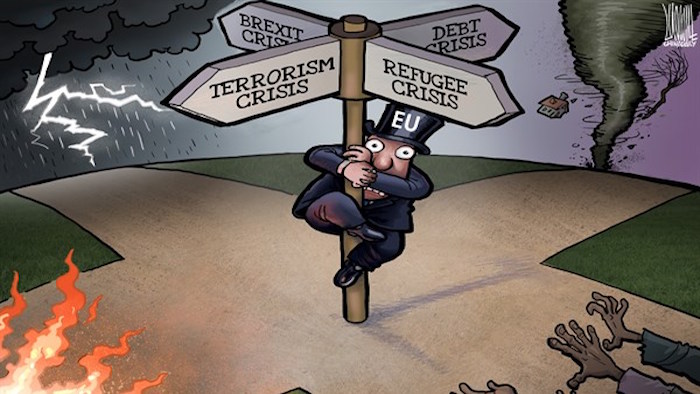 Europeans believe refugees raise risk of terrorism but not crime

A recent survey from ten European countries reveals a majority of citizens fear that the surge in refugees can increase the likelihood of terrorism in their country, but they believe refugees are no more to blame for crime than other groups and don’t have an unfavourable view of Muslims.

In eight of ten countries surveyed by Pew research at least half think incoming refugees will increase the likelihood of terrorism in their country.

This figure, from the spring 2016 global attitudes survey, highlights a connection that exists in many European minds between the refugee crisis and terrorist attacks, such as the ones in Paris, Brussels and Nice, where 84 people died as a single attacker drove his lorry into a crowd after the Bastille day firework display on the Promenade des Anglais.

This causal link is most perceived in Hungary (76 percent), Poland (71 percent), the Netherlands and Germany (both 61 percent). In France, 46 percent think the arrival of refugees increases the risk of terrorism. In the UK this figure is at 52 percent.

“Amongst Europeans, perceptions of refugees are influenced in part by negative attitudes toward Muslims already living in Europe,” Pew Research says. “In Hungary, Italy, Poland and Greece, more than six-in-ten say they have an unfavourable opinion of the Muslims in their country – an opinion shared by at least one-in-four in each nation polled.”

But the study says “there is less alarm that Muslims already living on the Continent might sympathise with extremists.”

Most attackers in Paris and Brussels were French or Belgian nationals.

Pew Research also highlights sharp ideological divides on the refugee question: “In Greece, 81% of those on the right express an unfavourable view of Muslims, compared with 50% of those on the left,” the study shows.

Even if ideology is a driving factor, so is the level of education: “older people and less-educated individuals expressing more negative opinions about refugees and minorities,” the study shows.