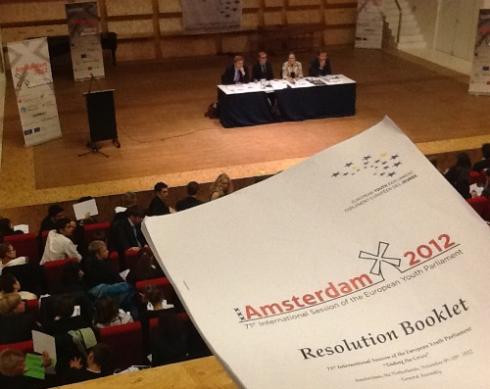 “Putting an end to the crisis”: the subject has preoccupied the minds of European leaders for many months without yielding any valid results. So why not embark on a quest for different ideas and take a look at the fresh perspectives in a debate between secondary school students from countries across the continent?

This was the spirit of the 71st session of the European Youth Parliament (EYP) held in Amsterdam from the 2nd to 10th November, for which Presseurop was one of the media partners.

Over eight days, 220 delegates aged from 16 to 20 hailing from some 36 countries examined such diverse issues as access to education and employment, monetary and banking unions, as well as gender equality in the workplace and in European diplomacy. Presented by 15 committees which mirror the committees of the real European parliament, 15 resolutions were submitted for debate and a vote in the general assembly. The 13 resolutions adopted will be transmitted to Brussels in the hope that they may inspire future legislation prepared by the European commission and voted by the European parliament.

Established 25 years ago in Fontainebleau, every year the EYP holds three international sessions and about 100 other national and international meetings. Approximately 40 resolutions are adopted every year, but none of the participants can remember one that was transcribed into European law.

Perhaps this is because, as Prince Constantijn of the Netherlands (who is also the deputy director of cabinet for his compatriot and European Commissioner for Digital Strategy, Nellie Kroes,) explained at the opening of the session, the youth parliament is just one of several dozen thematic European parliaments with specific categories for delegates.

At the same time, it may be that as an organisation which is open to young people from Council of Europe countries (plus Belarus), it has not become established as the juvenile counterpart of the European parliament.

However the European Youth Parliament is not limited to this lofty aspiration or idealistic purpose. As the President of the 71st session, Gillian O’Halloran, explains “EYP is a youth organization that is directed at bringing young people from across the Europe together.”

Its objective, she adds, is to bridge “cultural barriers between young people of different nationalities and different backgrounds and it provides them a platform to discuss these matters in a way whereby they get to represent their own opinion rather than for example that of their country or any organization.”

The EYP is first and foremost a space for learning about European citizenship, in which reflection and exchanges are both a means and an end in themselves. The conduct of the debates, which are in English and to a more limited extent in French (the two official languages of the EYP), is evidence that this ambition has been realised.

Largely at ease and well informed on the subjects at issue, which they have discussed with representatives of European institutions at the committee stage, the delegates are more than able to hold a clear and combative debate. This also highlights the fact that the delegates, who at the national level are mainly selected from school clubs run by teachers, are, as Gillian O’Halloran notes, “the cream of the crop”.

Having said that, it would be wrong to conclude that the EYP is a club for a European elite. Not all of its members come from major secondary schools in major European cities, and not all of them — as the debates amply illustrated — are unconditional Euro-enthusiasts. And in this regard, with its qualities and its faults, the European Youth Parliament is indeed a reflection of today’s Europe.