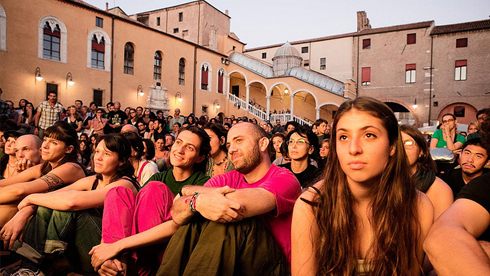 Never have the under-30s had to face such precarity, while at the same time, disregard for their generation has reached an all-time high in the current election campaign.

No one will be able to accuse the future government of breaking its promises to young Italians, simply because it will simply not have made any.

As it stands, first-time voters have been completely overlooked in the election campaign. For them, politics is like a disco guarded by musclemen who refuse to let them in.

Gesticulating and strutting about in their bid to attract the limelight, the five coalitions in the running appear to be inspired by the 2011 pop hit Gangnam Style. But they have failed to impress a young generation of Italians, which watches them on TV while leaving disappointed comments on social networks. Many of them are tempted not to vote, but this impulse will only play into the hands of the bouncers who are eager to keep them out of the political game.

Traditional social networks are slowly crumbling. Families have exhausted their reserves of patience and money: as evidenced by the number of “we buy gold” shops, declining property prices and the fall-off in the sale of durable goods. The rate of unemployment among 15-24 year-olds on the labour market has reached 37 per cent, its highest level since 1992. And this is the national average. Just imagine how bad it is in southern Italy. Over the last 10 years, the percentage of Italian graduates who leave to seek their fortunes abroad has risen from 11 to 28 per cent.

Faced with phenomena of this magnitude, you would expect a response from the world of politics. You would expect to see deliberation, decisions, detailed strategies and concrete measures, because no country can decently allow itself to sacrifice an entire generation. But any such expectation will be in vain. Our candidates are fighting tooth and nail over taxes and pensions. But they only address themselves to those who have work, or who had it in the past. It is as though the others, those who run the risk of never finding work, count for nothing. The generation of under-30s is slowly becoming transparent. The frustration and the anger that this will inevitably generate could have dramatic consequences. And there are many signs that this will soon be the case.

The orgy of airtime accorded to veteran politicians – 63 hours for Silvio Berlusconi, 62 for Mario Monti, 28 for Pier Luigi Bersani (of the left-wing Democratic Party) between December 2, 2012 and January 14, 2013 – will likely be perceived as a provocation. When Antonio Ingroia (the anti-mafia judge at the head of the hard-left Civil Revolution) goes on TV, a melee ensues. Away from the cameras, Beppe Grillo (of the Five Star Movement) is hardly any better. Everything has an air of déja-vu. We have heard it all before. In 2013, Italian politics increasingly resembles the small town in Groundhog Day, where the protagonist, played by Bill Murray, is condemned to relive the same 24 hours over and over again.

Reaping what you sow

The youthist fervour of the Monti government has been limited to such measures as the reintroduction of apprenticeships and a “Digital agenda” [designed to promote innovation and the digitisation of administrative data], which will be difficult to implement. The Five Star Movement is proposing “guaranteed unemployment benefit” but has neglected to say how it will be financed. The right, which avoids mentioning the subject, has cleared young people from its lists in order to make room for its leader’s Pretorian Guard. The left, even though it does have some new faces, has not come up with any radical measures to improve the lot of young citizens. The honour loans proposed by Anna Finocchiaro [the former Minister for Equality and president of the Democratic Party group in the senate] will amount to little more than a band aid on a fracture, which should be treated with a dose of labour market flexibility to facilitate recruitment and layoffs.

If we want a new and vigorous authority to take the helm in Italy, we should not be so disdainful of the pilots of tomorrow. Otherwise, they will simply leave us by the wayside, and they will be right. Even more importantly, we should not pretend that we want to help them, when we are not willing to make even the slightest concession for their future.