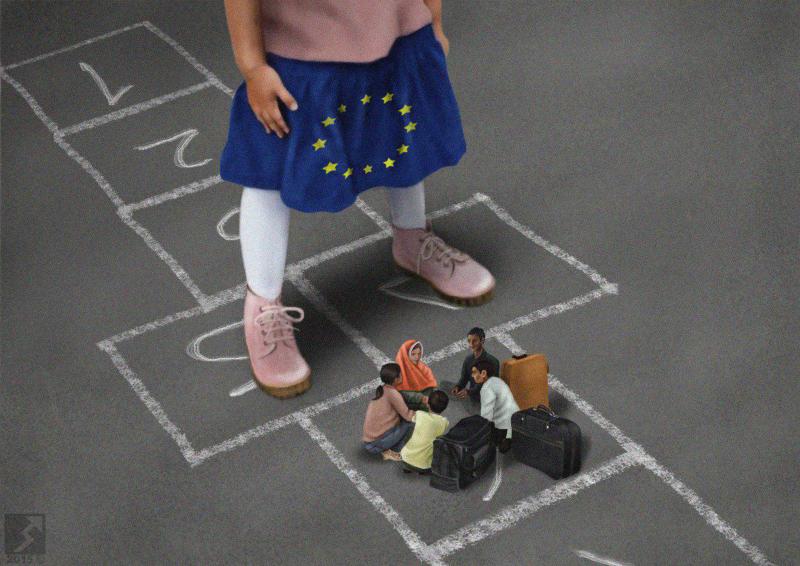 The Pact on Migration and Asylum recently presented by the European Commission aims almost exclusively to prevent migrants and refugees from setting foot in Europe and to discourage them from coming, thanks to contradictory measures and formulas borrowed from the jargon of international consulting firms.

The Pact on Migration and Asylum, presented on 23 September by the European commission, has managed to shock even those who, like me, did not expect anything good. Before examining some of its most problematic aspects, I would like to take a quick step back in time. In 2008 the European Council adopted a Pact on Immigration and Asylum. It was the result of months of negotiations, debates and recommendations from civil society. Reading back the five main objectives of that Pact makes it possible to measure the depth of the abyss into which the European Union has plunged in just twelve years.

In 2008, the first objective was "to organise legal immigration taking into account the priorities, needs and reception capacities established by member states, and to promote the integration of immigrants". The other objectives were: "to control illegal immigration and facilitate the voluntary return of migrants to their countries of origin or transit"; "to make border controls more effective"; "to build a European asylum framework"; and finally "to create a comprehensive partnership with third countries to foster synergies between migration and development".

In the 2020 Pact, legal migration has become a matter to be addressed later, as the Commission Vice-President Margaritis Schinas said. The European framework for migration and asylum now rests on two pillars: stop and return. And the global partnership with third countries no longer pretends to be an equal relationship: any means of pressure is allowed to force countries of origin and transit to detain people on their way to the European Union.

In these twelve years the repressive orientation of these policies, which has been in place for some time, has never changed. Depending on the times and crises, emphasis has been placed on one or the other priority: controlling borders, combating smuggling of migrants, increasing returns. However, the tools and resources at the service of these policies have multiplied (one example above all, the growing power of Frontex).

In the pact presented by the Commission, for example, a new figure, the European Return Coordinator, has been established and a new form of solidarity has been introduced, the "return sponsorship", which should enable a member state that is unwilling to receive asylum seekers to get by by organising the return of people who have been denied asylum. According to the proposal, the member state "would commit to return irregular migrants on behalf of another Member State, carrying out all the activities necessary for this purpose  directly  from  the  territory  of  the  benefitting  Member  State  (e.g.  return  counselling, leading  policy  dialogue  with  third  countries,  providing  support  for  assisted  voluntary  return and  reintegration)."

In other words, a country like Hungary would find itself managing the return of a person from Italy. Put like that, it seems a totally impractical idea. In addition, member states would also have the right to choose "which nationalities they wish to sponsor the return of.". So Hungary could tell Italy that it will repatriate the Iraqis, but not the Afghans. Here the scenario from impracticable becomes dystopic.

At other points, the pact seeks to legitimise illegal practices that have already been tried and tested, for example by providing for a member state to suspend the registration of asylum applications in a crisis situation for four weeks. This is exactly what Greece did last March, and the Commission, instead of condemning this behaviour, is now proposing to turn it into a possible derogation.

Many lawyers are proposing detailed and often critical analyses of the documents that make up the pact (e.g. members of the Odysseus network in a long series of contributions). But there is also another aspect that deserves to be commented on: that of communication. I’ve been striked by the cynicism and hypocrisy of certain words (the term sponsorship associated with an operation such as return and no longer just private sponsorship programmes to welcome refugees), of certain metaphors (that of the three-storey house, used by Schinas to describe the pact, almost a provocation launched to those who dream of finding a new home in Europe while having to face three "barriers" placed in their path), and certain sentences (for example this one by Commissioner for Home Affairs Ylva Johansson, according to whom repatriations must be accelerated because "I think when a person has been living in country for years, having relations, falling in love, then it’s much more difficult, both for the individual and for the authorities to do the return to the country of origin").

Also striking is the use of the "McKinsey jargon", the consultancy firm that in recent years put its managerial skills at the service of several European governments interested in speeding up their asylum procedures (the most recent investigation, on Greece, came out in June on Balkan Insight and is signed by Luděk Stavinoha and Apostolis Fotiadis). Terms in the pact text such as "streamline", "end-to-end" and "tailor-made" seem to be taken from the company's website. And one wonders how much the McKinsey approach is present in the pilot project announced by the Commission President Ursula von der Leyen (a new centre on the island of Lesbos run by the European Union along with the Greek authorities) and in the new border procedures provided for in the Pact (in-depth screening of arrivals and accelerated examination of asylum applications).

Dozens of associations and experts had sent recommendations to the Commission ahead of the publication of the Pact, which was postponed for months. With only a couple of weeks to go, Catherine Woollard, director of the European council on refugees and exiles (Ecre), wrote a very harsh article, whose sarcasm stemmed from one certainty: once again the Commission was about to hit the right of asylum – "there are few other areas of policy where EU law is so systematically disregarded with impunity", wrote Woollard.

The pact will now be examined by the European parliament and the Council. As was the case with the proposed reform of the now ditched Dublin Regulation, it is likely that the two institutions will go on opposite directions when revising the proposals: member states will try to make them even more flexible and adaptable to their needs, while MEPs will try to reintroduce some kind of respect for the right of asylum. Meanwhile, as the Commission points out, there are still five previous reforms to be concluded in the field of asylum and migration. We will see which, of all these proposals, will end up being successful and with what consequences.

The countries of origin and transit, particularly African countries, will probably not like the pact. "The growing use of conditionality to accelerate returns may harm the Union’s relations with third countries", Alberto-Horst Neidhardt and Olivia Sundberg Diez wrote in April in a comment on the pact that was being prepared. By the end of 2020, the revision of the Cotonou Agreement between the European Union and the African, Caribbean and Pacific Group of States (ACP) signed twenty years ago should be concluded. An opportunity to make their voice heard on this issue.

Finally, there are the great absents in this debate, the people who are living through the degradation of European asylum and migration policies: the refugees from Lesbos who set fire to it in order to get out of that hell, as detainees have been doing for years in detention and repatriation centres in Italy and other European countries; people who will continue to risk their lives to get around the increasingly violent and automated controls at Europe's borders and, once inside, to build a life for themselves while knowing they are risking deportation at all times. There are around five million undocumented people living in the European Union, but the pact does not mention them. They are invited to remain in the shadow while governments and European institutions devote themselves to sealing borders.

Schinas concluded his speech with a disconcerting statement. "We have so much to be proud of in this Union", he said, evoking economic strength and common values, and then added: "We do not have the death penalty". In the version of the speech published on the Commission's website this last sentence is not present, but it is clearly a point that Schinas cares about (as can be seen from this 2018 tweet, when he was still Deputy director-general at the Commission).

The European Union might not have the death penalty, but if there is one thing it should be ashamed of – if only it would give the same value to the life of every person – it’s the way it makes the journeys of those who try to reach its borders more and more lethal. And this pact is yet another proof of this.