Report Estonia
On board a bus to Tallinn in January 2013. The green pass allows residents free travel on all public transport in the capital 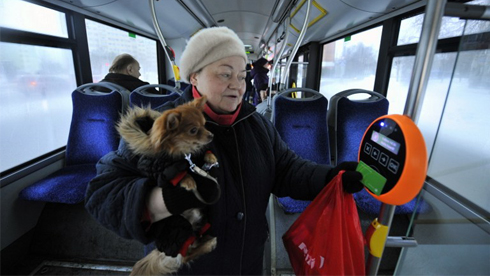 Free travel is no paradise

On January 1, some residents of Tallinn saw one of their dreams come true, when they were granted the right to use public transport for free. However, not everyone is happy with the measure. For some, it appears to be a rushed move designed to win favour with voters ahead of autumn local elections.

On board a bus to Tallinn in January 2013. The green pass allows residents free travel on all public transport in the capital

Whenever they get a chance, Lithuanians like to say, “Don’t look a gift horse in the mouth”. However, the residents of Tallinn, who have been enjoying free public transport since January 1, now set more store by the American adage: “There's no such thing as a free lunch”.

Thea, a service sector worker, is delighted to be saving around €20 per month, which is the average cost of a monthly travel pass for a Tallinn resident. Having said that, she immediately adds that the new system also has its disadvantages. “The number of homeless people and drunks using public transport has increased. Before, they only took buses from the notorious Kopli neighbourhood, but today they are everywhere. Worse still, the buses are often jammed, and you have to wait for another one with a bit more room,” says the 22-year-old Estonian.

“People now have to pay for public car parks, which used to be free, and the most expensive parking zones have been extended. Some might say that these changes amount to sustainable development, but people have the impression that the city council has upped the rates, because it needs money to pay for the free public transport,” explains Andres Kasekamp, a professor at the University of Tartu.

To use public transport, locals in Tallinn have to be registered as residents of the city, and whenever they travel they have to carry proof of identity as well as a traveller’s green card, which costs €2 for four years.

As Tallinn’s deputy mayor Taavi Aas, a member of the Centre Party [the most popular party in the country’s Russian community], points out, travellers still have to swipe their green cards when using the transport network so that experts can analyse the flow of passengers.

Many Tallinn residents were astonished at the rapidity with which the totally free transport system was implemented.

But does the measure have anything to do with local elections due in the autumn, or predictions that the vote will be won by the Centre Party?

Although Tallinn is supposed to be on its way to becoming a green city, Andra Weideman is convinced that the only buses in circulation are older models, which create a great deal of pollution.

Cart before the horse

“They announced that from January 1, all Tallinn residents would benefit from free transport. We asked what would be the consequences for drivers who used their cars everyday. They told us we would have to wait for that information, which would become available in time. But we have not heard anything since.

When they introduced free transport, they put the cart before the horse, argues I. Skudraite. For the architect and urban planner, the measure was akin to installing windows in a house whose foundations have not yet been completed.

“As a general rule, free transport is clearly a good thing, but certain essential intermediate measures have been ignored. In winter, it is very difficult to use the pavements in Tallinn, which are not cleared. A lot of the transport system is obsolete. For example, the trams are old and inaccessible to wheelchair users or even people with pushchairs. The port, which is the heart of Tallinn, is not linked to any many road out of the city, and is only accessible through a network of narrow streets. Money has been pumped in so that people can move around more, but are they really doing that?” he wonders.

The Baltic Tiger is back

Two decades after regaining its independence, Estonia has secured a stable position in the globalised world, energy sovereignty, and free bus tickets, enthuses the weekly Uważam Rze in Warsaw. It then rolls off a long list of the small Baltic country's achievements –

The unemployment rate is below 10 per cent and the average wage is €839. [...] The country showcases itself as digitally advanced and citizen-friendly. [...] Estonians are seldom ever offline. More than 1,100 free hot spots operate throughout the country. You can use the Internet to vote and pay taxes, and starting a business online takes just 18 minutes.