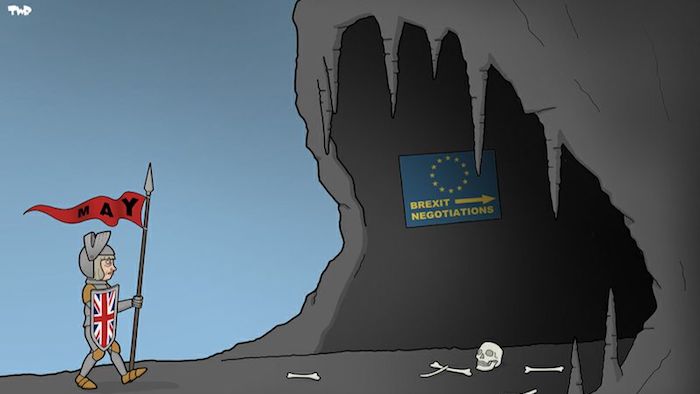 From “hard” to “hostile” Brexit?

The forthcoming general election in the United Kingdom will to a large extent centre on what sort of exit from the European Union the country might be able to achieve. How could an enhanced mandate for Prime Minister Theresa May affect the negotiations of Brexit?

The decision by Theresa May to call a snap election, just two years after the last general election and a year after the divisive referendum on EU membership, demonstrates the power of the Prime Minister in the British political system. Her determination to seek her own mandate, despite having denied several times that she would do so, rode roughshod over the Fixed Parliament Act, introduced by her predecessor and intended, precisely, to curb the power to call an election at a politically opportune time. Perhaps surprisingly, this attracted no real resistance.
The early election largely reflects the conclusion, foreshadowed in the forthcoming edition of the Bertelsmann Stiftung’s Sustainable Governance Indicators’ (SGI) report on the United Kingdom, that a “major political challenge will be to sustain a parliamentary majority to support the course chosen by the Prime Minister towards EU exit”. As the SGI report on the UK explains, the governing Conservative party had only a small majority. Divisions within it between hard-line euro-sceptics and pro-Europeans were making the negotiation of Brexit very awkward.
The SGI report also draws attention to the need for the government to “be more sensitive to the 48 percent of voters wishing to remain in the European Union”. So far, however, there have been few obvious concessions to this large minority. On the contrary, the outgoing government, and Theresa May in particular, have interpreted the vote of the British people to mean curbs must be imposed on the free movement of EU citizens into the UK, reversing the openness shown in the SGI report to have been a feature of the UK stance on inclusion. The government is also adamant that the UK must be freed from the jurisdiction of the European Court of Justice. The logical consequence is that Britain cannot remain in the EU single market and this is now central to the UK negotiating stance.
Despite the ostensible links with the Brexit negotiations, there is no sign that the election will re-open the issue of UK membership of the EU. The two largest parties have, broadly, accepted that Brexit is going to happen, while the traditional third party, the Liberal Democrats, starts from such a low base (just nine members out of six hundred and fifty in the last Parliament) that it would need an electoral earthquake for it to emerge with more a significant voice. Its half-hearted attempts to sell itself as the pro-European party appear to be making no headway and there were few signs in the local elections held at the start of May of a significant revival in the party’s electoral prospects.
Instead, the Scottish Nationalists are expected again to emerge as the only substantial bloc of pro-European MPs. Moreover, the UK Independence Party – having achieved its defining goal of Brexit – appears to be in terminal decline, with the bulk of its voters expected to favour the Conservatives.

The snap election is not solely about Brexit

It would wrong to see the election as exclusively, or even mainly, about relations with the EU. The National Health Service (NHS) is always a highly salient issue in UK politics – indeed, even in the referendum on Scottish independence in 2014 and last year’s EU referendum, it featured prominently. Boris Johnson toured the country last year in a red bus emblazoned with the (misleading…) promise that leaving the EU would release £350 million a week to spend on the NHS. As the SGI report shows, health provision in the UK is generally high quality and cost effective, but is under strain from demand outpacing the resources available for it and from inadequate integration between health and social care services.
Although portrayed initially as being an election centred on what sort of Brexit, the campaigns have focused on a combination of education policy, the NHS, tax policy and the respective leadership qualities of Theresa May and the Labour party leader (and, realistically, only possible rival as Prime Minister), Jeremy Corbyn. The latter is, however, widely regarded as a weak, indecisive and politically extreme leader, so that Theresa May is in an unusually strong position.
The widespread expectation is that the outcome of the election will be a much bigger majority for the Conservative Party, with the only political doubt being how big. This prompts questions about how an enhanced mandate will affect the negotiation of Brexit. Already several issues are emerging as particularly tricky. One of the most contentious is what has become known as the ‘divorce bill’, with some on the EU side now suggesting the UK will have to pay as much as €100 billion to clear its commitments, while diehards on the UK side say ‘not one penny’.
Optimists argue that a stronger mandate will give Mrs May the authority to pursue the deal she wants, without having to face sniping from either extreme in her party, while also giving her more authority to make the compromises bound to be required. She might, for example, be able to push through a financial settlement with the EU and contain the political fallout from doing so. Another consideration is that a new mandate should last until 2022, easing the potential pressures on securing a deal early enough to influence the next UK general: 2020 would have been very tight; 2022 will be more manageable.
Pessimists, by contrast, worry that it will embolden her to seek a ‘harder’ Brexit and even to threaten to walk away from the negotiations if some of the more intractable issues cannot be resolved amicably. If the pessimists are correct it could end up being ‘hostile’ rather than ‘hard’ Brexit, with damaging consequences for both sides.
Let us hope the optimists are correct.