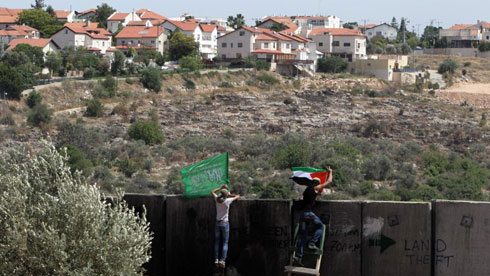 The European Union’s decision to halt its funding of Israeli institutions inside the territories occupied since the 1967 war is absurd, fails to acknowledge the current political complexities and will not help bring peace, according to an editorial in The Jerusalem Post.

Palestinian protesters climb Israel's separation barrier near the Jewish settlement of Hashmonaim in the West Bank.

What could the European Union have been thinking when it decided to issue guidelines that, if implemented, would halt all its grants, prizes and “financial instruments” for research and development centers, hi-tech companies, academic institutions and other firms and institutions located beyond the 1949 Armistice line?

Though it tried to present the move as nothing more than “putting the rules of the game in writing,” as one EU official put it, the EU must have known the ramifications of putting into practice positions out of touch with the realities on the ground.

As The Jerusalem Post’s diplomatic correspondent Herb Keinon noted, the document including the new guidelines “does not provide an opening for penalising Israeli institutions inside the pre-1967 lines with business activities beyond the Green Line; it makes available a gaping hole.”

Not only will they now deny funding to, and cooperation with, Israeli institutions based or operating over the 1949 Armistice line, the Europeans will demand that all future agreements between Israel and the EU include a clause that stipulates Israel accepts the EU’s position that sees all territory beyond the Green Line as not belonging to Israel.