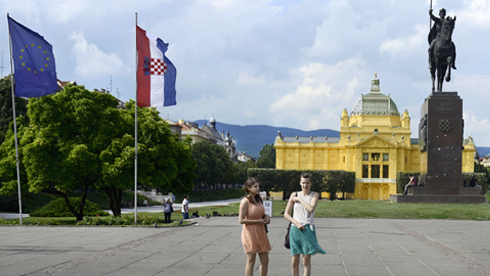 The path has not been easy, but Croatia will finally manage on July 1 to enter the European Union. To do this, it had to put in place many far-reaching reforms, which have significantly improved the country and the society.

In Croatia, time is speeding up as accession to the European Union approaches. Like a soldier finishing military service, Croatia is counting down the days to the moment it becomes a member. Impatience grows as the days go by as the evening of June 30 draws ever closer.

But in the frenetic context of this countdown, we must not forget that we have been awaiting this moment for 10 years: that is, since February 2003, when then-prime minister Ivica Račan filed the official membership application in Athens.

To be sure, anyone could correctly argue that February 2003 is not really the date everything started. Other events had come before it, including the Zagreb Summit [attended by the EU, Croatia, Albania, Macedonia, Bosnia and Herzegovina, and Yugoslavia on November 24, 2000], as well as the Stabilisation and Association Agreement signed in 2001.

Some may be tempted to suggest little has changed in 10 years. Our leaders went to meetings in Brussels, and leaders from Brussels came to meet with us. They spent their time debating, sometimes negotiations slowed when they tackled serious problems that needed time to be solved, and sometimes there were breaks in the discussions. We often had homework to do, and like good students, we completed more or less with success. The EU would assign us to adopt a regulation or implement a plan of action, and we would do it. Brussels gave us good grades, and so we can join the EU.

For many, these 10 years, six of which involved negotiations, resembled a long river that flowed too slowly, where the scenery was always the same. Yet, on the eve of joining, everything has changed: society has matured, the number of cases awaiting trial has decreased, power is more transparent, food safety controls are sharper, and the country has even learned to be more responsible in terms of money. Croatia will continue to make efforts and make refinements even after July 1.

One of the most important achievements during the accession process, without a doubt, was the empowerment of citizens. That would probably have come even without the EU, but the negotiations sped up its evolution. Croats today are no longer content to merely participate in political life through elections. They fight for their rights within the framework of associations and civil initiatives, and so they strengthen direct democracy.

The most telling example, which reflects the evolution of Croatian society, is this year’s Zagreb Pride march for gay rights on June 15. On the occasion of the first pride parade was in 2002, eight months before Račan formalised our membership application, there were probably more straight people supporting gay rights than homosexuals themselves. Participants were few in number and largely outnumbered by opponents, who did not hesitate to show their hostility by attacking the parade. Eleven years on, the Zagreb Pride Parade draws a much more positive turnout. And – something that was unthinkable in 2002 – the government could draft a law to legalise same-sex marriage by the end of the year.

For Croatia, the European Union was not an easy goal, but the country managed to get there. The EU has not stopped pushing for changes that Zagreb agreed to make. In this long rondo with the European Union, much has changed: the European Union is no longer perceived as an Eldorado, and not just because of the crisis. Croats have stopped idealising it, stopped thinking of it as a well-tuned musical instrument that never puts out a false note.

Today, the European Union has turned into a mass of clauses, more concerned with details such as aflatoxins (carcinogenic fungi in some foods), than with high ideals.

The rondo with the Union will stop on July 1 with a programme specially designed for the occasion on the central square in Zagreb. A ceremony will also be held in the Klovićevi Gallery, a few metres from the Picasso paintings on display. Croatia has just completed a cycle and is beginning another, a completely different one.