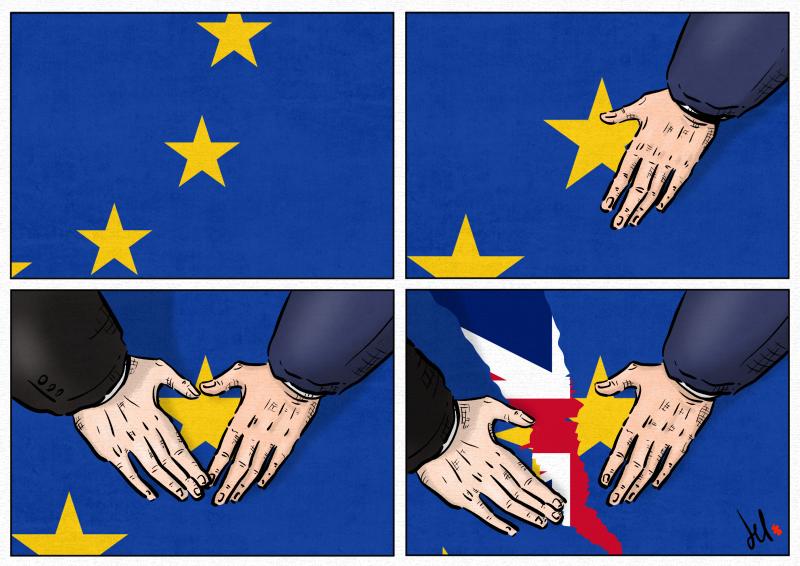 On 24 December 2020, the UK and EU agreed a new Trade and Cooperation Agreement to govern the future trading and security relationship now that the UK has left the EU. The view on the deal from our partners from New Europeans.

On 24 December 2020, the UK and EU agreed a new Trade and Cooperation Agreement to govern the future trading and security relationship now that the UK has left the EU.

President Ursula von der Leyen spoke about the "long and winding road " that led to an agreement.

However, it is also clear that there is much unfinished business and that the journey down that road is far from complete.

As Roger Casale, Executive Director of New Europeans, has said: "The road will still be long and winding and in the end it may well lead back to the door of the EU."

Our top 10 take-aways from the deal:

1.  There will be no free movement of people, no free roaming charges, no passports for pets. The UK government has decided to end free movement rights, and with it the right to visa-free travel beyond 90 days (within a 180-day period). British citizens who want to live, work or study in the EU and EU citizens who want to live, work or study in Britain will only be able to do so under the conditions laid out in the agreement. "Free movement has brought huge benefits to people in the UK and in the EU and it is a tragedy. a human tragedy, that it is coming to an end." Free roaming is no longer available to British citizens travelling to the EU or EU citizens travelling to Britain. Pet passports are no longer valid between the EU and the UK. "The Prime Minister said, "now for the sprouts", but the problem is that although Brussel sprouts can move freely between Belgium and the UK, that will no longer be the case for people."

2. It's the end of Erasmus exchanges with the UK, while access to research grants has been neutered. Despite previous indications that the Erasmus exchange programme would continue, and the willingness of the EU,  British participation has been cancelled at the UK's request. Erasmus is a great way for young people to learn about Europe and to build friendships and networks across the continent that they will hold onto through life.  It helps students experience another culture and language and to understand what it means to be a modern European. "This decision was driven by ideology. The last thing the UK government wants is to continue to expose young people to the European "way of life".  What exactly are they afraid of?"

While the UK can still apply for top tier membership of the forthcoming EU Horizon Europe research initiative, this will not come with access to the prominent pot of funding for new technology projects. As Science Business reports,  UK companies will receive less generous access to those in other non-EU countries such as Israel and Norway. Britain will still have access to Euratom,  the ITER project to build the world’s first functioning nuclear fusion system, the earth monitoring project Copernicus, and EU satellite surveillance and tracking services (Galileo).

However, the UK negotiating team failed to secure the right for Britain to have a say in shaping these programmes and the UK will not have access to Galileo encrypted military data.  "Even in outer space, it is not possible to have your cake and eat it".

3. Services account for 80% of the UK economy but were largely left out of the trade deal. While the UK had an overall trade deficit with the EU of -£79bn in 2019, it also had an £18bn surplus in trade in services. UK companies will no longer benefit from the 'country of origin' principle or "passporting' of services and so the agreement is subject to a long list of exclusions which vary by sector and member state.

As the Institute for Government  puts it: "UK nationals will not, for example, be able to sell actuarial services in Italy or construction services in Cyprus. They will not be able to be surveyors in Bulgaria or tobacconists in France." The EU and UK have made a 'non-binding agreement", or declaration,  to meet again to find agreement on a regulatory framework for financial services. While they are talking, Frankfurt and Amsterdam will continue to attack the predominance of the City of London. Meanwhile, UK lawyers are waiting to hear whether judgements in UK courts will still be enforceable in the EU.

4. Social rights will be undermined and environmental standards will be lower. The EU and UK have agreed to the "non-regression" of existing standards but only as far as this relates to trade and investment.  The new process agreed for safeguarding a “level playing field” sets such a high bar for proof that key elements are likely to be enforced only rarely.

As the Institute for Public Policy Research points out: "Where the UK fails to keep pace on EU levels of labour or environmental protection and this affects trade or investment, the EU could take necessary and proportionate measures (e.g. introducing tariffs) in response. The criteria for being able to use these rebalancing measures is strict: any assessment of the impacts of divergence must be based on “reliable evidence” and not on “conjecture or remote possibility”. Moreover, when one side intends to take rebalancing measures, the other side can request an arbitration tribunal to decide whether such measures are allowed before they are enacted.

This means that rebalancing measures are only likely to be used in a rare number of scenarios."

5. We will see the return of many non-tariff barriers to trade. There will be no mutual recognition of product standards. So suppliers will have to demonstrate that goods comply with both the UK and the EU's regulatory standards before they can be traded. In some cases the EU and UK may accept compliance with international standards. As Faisal Islam, the BBC's Economics editor, put it: "The Prime Minister's manifest error that there would be "no non-tariff barriers to trade" had business leaders falling off their chairs"

6.  The security of the British state has been compromised. The UK loses access to the Schengen Information System (SIS), which provides real time alerts to identify terrorists and serious criminals.  On average, the UK police force accesses the SIS system 1.65m times per day. Having lost its voice in Europol, the UK will have to embark on a series of 27 bi-lateral conversations with EU member states in order to secure cross-border co-operation agreements.

As Mark Townsend, of the Guardian explains: "With no obvious sign of a substitute system, urgent negotiations are needed to agree a scheme that can fill this huge intelligence void." Extra talks will also be needed to replace the work of Eurojust, the agency responsible for judicial cooperation in criminal cases across member states.

7.  Measures are not yet in place to secure data protection for consumers and trust in the digital economy. According to a study by DigitalEurope, 6 out of 10 European companies transfer data between the EU and the UK. If adequate security measures cannot be agreed then restrictions will inevitably have to be placed on data transfers, further restricting trade between the EU and the UK. While this is sorted out, the UK has suspended its own data protection rules for a maximum of six months.

But as the Institute of Government makes clear: "Despite the UK’s application of GDPR and implementation of the Law Enforcement Directive under the 2018 Data Protection Act, there is no guarantee it will be awarded an adequacy decision."

8.  Uncertainty over energy, transport and state aid policy. UK cargo and passenger carriers will be able to operate still between the EU and UK but no longer offer flights between two destinations within the EU. Cabotage will also be reduced for road hauliers. Britain will no longer participate in the EU’s internal energy market or be part of the bloc’s emissions trading scheme but we don't know what will replace this. "The British government said this month it would establish a domestic emissions trading scheme (UK ETS) from Jan. 1." (Reuters)

On state aid, the EU and UK have agreed to create a body to provide independent oversight. However, as  Alexander Rose, director at legal business DWF, said: “We know we will have a new UK Subsidy Control regime, but at this point ... we don’t know which body will oversee this, what the rules are and whether block exemptions (used for 99% of awards) will remain.”

9.  Fishermen have been used as bargaining chips. Fishing accounts for a very small part of the UK economy but it has always been a highly sensitive issue politically. It was leveraged during the referendum campaign and subsequently in the negotiations but at the last minute, many of the demands that the Government had been making were dropped.

As Jane Sandell, Chief Executive of UK Fisheries put it: “We’re still looking for the ‘prodigious amounts of fish’ we were promised and for us  it (the deal) changes nothing.” During the agreed transition period, only 25% of the EU's fishing rights in UK waters will be transferred to the British, not the 80% which the government had demanded initially. "They thought they were talking about fish, but in fact it was all about the chips - the fishing industry became a bargaining chip in the wider negotiations".

10. Nothing to stop the break-up of the United Kingdom. If an independent Scotland wanted to join the EU at a later date, there would be nothing the UK could do to stop it happening. If new states apply to join the EU, then the EU Is obliged to consult with the UK, but Britain does not have a veto. In responding to the EU-UK Trade Deal on Christmas Eve, Nicola Sturgeon, Scottish First Minister, said: "It beggars belief that in the midst of a pandemic and economic recession Scotland has been forced out of the EU Single Market and Customs Union with all the damage to jobs that will bring."

Northern Ireland enjoys special treatment, not least to safeguard the Good Friday Agreement.  There will be no border checks between Northern Ireland and the Republic of Ireland. The UK government has dropped provisions in the Internal Market Bill which would have given it the power to set aside elements of the Withdrawal Agreement (in contravention of international law). The Irish government has also said that it will fund Northern Irish citizens to access the Erasmus programme.

The disastrous "no deal scenario" has been avoided.

As a result there will be tariff-free and quota-free trade in goods between the UK and the EU. There will also be continued social security coordination between the UK and the EU, including healthcare coverage for EU and UK visitors. Limited data-sharing will also continue for security purposes, including  on DNA profiles, fingerprints, vehicle registrations, and passenger name records.

Roger Casale concludes: "What I most like about the deal is that it represents the furthest away from the EU that the UK is ever likely to get – we have finally hit rock bottom. That's the moment when we all need to come together to start making things better again, even though life will not be returning to normal".