Report Turkey
A protester on Istiklal Avenue in the centre of Istanbul, July 14, 2013 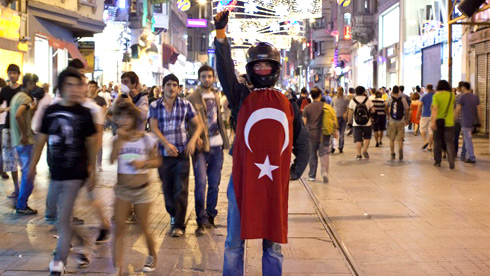 Heading for the ‘end of history’

According to American political analyst Francis Fukuyama, a society reaches maximal development when the democratic aspirations of its members are fulfilled. Could it be that the recent and unprecedented demonstrations that took place there have brought Turkey to “the end of history”?

A protester on Istiklal Avenue in the centre of Istanbul, July 14, 2013

Every social phenomenon — and revolutions are social phenomena — is the result of an accumulation of causes, which determine how it manifests itself. And it is for this reason that conspiracy theories are are not valid in practice.

The course of a string of events can be modified by one person or a group of people, but a historic event is based on the contribution of millions of people who generate millions of facts and events that converge, at a given moment, to create what we call an "historic event".

What we designate as the "Arab spring" — and the events in Turkey form part of this process — cannot be correctly interpreted without an awareness of this context. No one is directing these events from outside. They are not a war of one against the many, but rather the result in changes to the profiles, the mentalities and the psychology of individuals in the countries concerned.

In his book The End of History and the Last Man, the eminent Francis Fukuyama drew inspiration from Hegel to develop a particular model of the evolution of human society, which argues that humankind will attain a final level of social development when democratic aspirations are fulfilled. At that point, humankind will have reached "the end of history." This means that liberal democracy, as opposed to other forms of political organisation and management, reaches a stage where it ceases to develop because of internal contradictions that endanger its functioning.

With this in mind, we can say that in Turkey, a new generation of young people, whose way of thinking is distinct from that of their parents or their grandparents, has begun to emerge. [[It is a situation that has much in common with Romania in late 1989]], when young people took to the streets to demand the end of communism, while their parents were presented in TV footage of the factories where they worked, swearing eternal allegiance to communism and Nicolae Ceauşescu, and heaping proletarian scorn on the protesters.

Today’s young Turks have grown up in the era of the Internet. They speak English and want the freedom to consume alcohol at any time of the day or night, and to be able to kiss their sweethearts in the street. Although they have not given up their faith or religious beliefs, it is clear that they oppose what they perceive to be restrictions to their personal freedom.

All of this has a resonance with the geopolitical and geo-economic status of their country. Turkey, which is a long standing member of NATO, has positive economic growth and a steadily increasing standard of living. And because it a gateway between the East and the West, it has always been subject of particular attention from the United States. But even though the standard of living in the country is increasing, its young people have taken to the streets. It is clear that they are not demanding bread, but freedom. They are not driven to protest by poverty, but by the perception that they are living in a country where the political regime does not correspond with their ideals. And the image of a western dressed Istanbul University teacher being assaulted by security forces is very much a symbol of these demonstrations.

Distance between Turkey and the West

After a prolonged period of military regimes, the one led by Erdoğan is most certainly civilian. However, there is a paradox in the governance of the country. It is precisely a civilian political regime that endangers the balance and stability created by the military dictatorships of the past. Whenever elections are organised in this type of country, they are won by fundamentalist religious parties who promise a return to tradition. That is what happened in Egypt, and it is probably what will happen in Syria and elsewhere. And it speaks volumes about the immense distance that continues to separate Turkey from our western world.

To resolve this immense contradiction, the Muslim world would need a religious revolution like the Reformation led by Martin Luther to establish a balance between religious faith and the typically human aspiration for civilisation and stability. If we look at our history books, we can see that Turkey would not be starting from scratch in this regard, but rather developing a tradition that began with Kemal Atatürk in the early 20th century.

[[Europe and the United States can help to negotiate a social peace]] that would sustain stability in the country, which is in a grey area with regard to democratic standards — neither democratic or anti-democratic — but which in the medium term has great potential to become a sizeable power, a member of the EU as well as NATO, and a vector of civilisation bordering the very problematic Middle East.

Economic freedom has ushered in political freedom. In Turkey, the signs are that "the end of history" — as imagined by Hegel and Fukuyama — is closer than it is in other Muslim states. However, by "closer", I do not mean that it will come about in a year or two, but perhaps in a few generations. But what does this count for on the level of history and in terms of the patience that time has had for us? However, it is vital that the country remains stable between then and now.