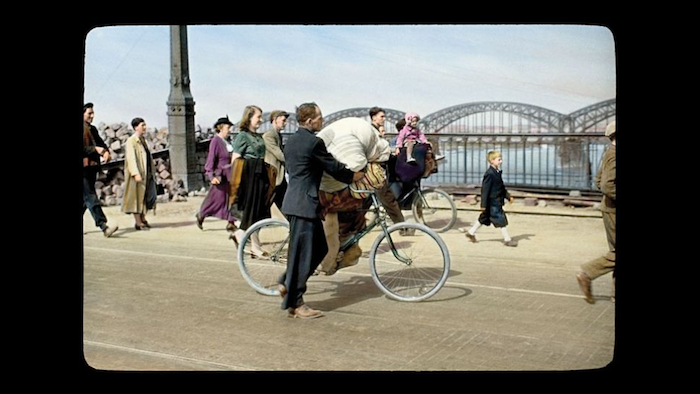 History is not black and white

On the first of September we commemorate the 78th anniversary of the beginning of World War II. Although much time has passed, the interpretations of historians and commentators vary widely on many aspects. The conflict began with Nazi Germany's invasion of Poland, followed by five years of harsh occupation. As a result of war and German and Soviet repression, more than six million Polish citizens perished (over one fifth of the total population).

VoxEurop presents three different narratives related to this tragedy. In the first article, Italian historian Lorenzo Ferrari describes the controversies surrounding the newly created Museum of World War II in Gdańsk. The Museum presents the suffering of Polish population in connexion with war experiences of Europeans, while the current authorities maintain that these experiences are incomparable. According to the author, this position results from the "nationalist" discourse of the Law and Justice (PiS) party.

Although we disagree with the historical interpretation of the Beata Szydło’s government, we do not share the opinion of the Italian journalist who considers PiS as a party with nationalist tendencies. Too often — as rightly pointed out in his polemic Bogdan Zalewski, a well-known journalist of RMF FM, the largest Polish commercial radio station — the adjective "nationalist" is being overused by western reporters describing the situation in Poland.

However, he tends himself to assuage the pre-war reality, when he writes that ‘Roman Dmowski's Endecja (National Democracy)’ cannot be compared to German nationalist socialism, that is Nazism, because it did not have ‘totalitarian and criminal elements.’ Yes, it is hard to make such comparisons, because Endecja never ruled in Poland, but it does not mean that if it did, it would not unveil these ‘elements’. All the more so because many Endecja’s members and followers openly declared anti-Semitism and sympathized with fascism (it is enough to read the writings of Jędrzej Giertych, one of Endecja’s ideologists).

The real irony of fate is that the mono-ethnic Polish state, the unreachable dream of that party, finally turned into reality as a result of German aggression, Holocaust, years of suffering of the Polish nation and political betrayals of the allies.

Concerning editor Zalewski’s criticism of the current exhibition in the Gdańsk Museum of the Second World War, it is difficult to regard it as impartial. The author refers exclusively to the authorities (Prof. Jan Żaryn, PiS Senator and Piotr Gliński, Deputy Prime Minister and Minister of Education) and media related to the ruling camp. His text is devoid of any references to the opinions and arguments put forward by the opposition or publications critical of the government (suffice to mention Polityka or Newsweek Polska weeklies or the daily Gazeta Wyborcza, as well as the Catholic weekly Tygodnik Powszechny, which is trying to keep its distance fromboth conflicting political camps). Of course, as a columnist, Zalewski has the right to do so. This fact, however, illustrates the deep divisions that have taken place on the Polish political scene and in the minds of millions of Poles. Poland's reality has become black and white, entirely lacking any shades of grey, and the only thing that seems to count is whether one is with or against PiS.

Bartosz Brzeziński, the author of the third article, also seems to be falling into the trap of selective outlook when he argues that the anti-immigrant rhetoric of the current government directly relates to interwar anti-Semitism. He greatly exaggerates, formulating a shaky thesis that the far right politicians in pre-war Poland did not encounter resistance when they openly called for the expulsion of all Jews from Poland. It is true that the slogan ‘Jews to Madagascar!’ was chanted at the demonstrations of nationalists, that there were brutal attacks of ONR (National Radical Camp) hit squads on Jewish students and that there were bench ghettos at universities. But we must remember that this was met by political opposition from PPS (Polish Socialist Party), from which Józef Piłsudski, the father of Polish independence, came, not to mention communists and Jewish political groups such as the Bund or Poalej Syjon.

It is also hard to agree with Brzeziński's claim that ‘most Poles looked the other way’, and only ‘a handful’ saved Jews during World War II. If it was just a ‘handful’, as the author suggests, there would not be so many Polish trees in Jad Vashem (most of all nations) to pay tribute to those who helped the Jewish people. Brzeziński also seems to forget about the existence of the Underground Council to Aid Jews and the Home Army’s pursuit of those who have away the location of hiding Jews and their rescuers or those who blackmailed them with denunciation for high ransom [dont know what this lady bit means]. And above all, he does not mention the fact that in Poland, as opposed to the countries of the Western Europe occupied by Germany, helping Jews was punishable by death.

Although we do not agree or fully accept the theses contained in these three articles, we have decided to publish them on our website without any editorial interventions, so that our readers, especially non-Polish readers, could get some knowledge of the extremely varied points of view on issues which for a long time delineated divisions in our country. Some may decide that Mr. Zalewski's text is anti-Semitic, others that Mr. Brzeziński's article is anti-Polish. We think that readers of VoxEurop should judge for themselves. It is much better when the discussion takes place in an open to all democratic space than on the street.