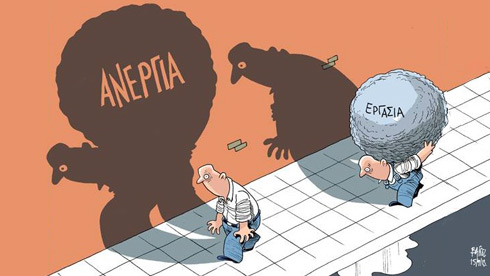 How far can wages plummet?

Whether they are recent graduates or older workers re-entering the workforce after a period of unemployment, Greeks of all ages must accept lower and lower wages.

"Many of the young people who send us their CVs to apply for a job are highly qualified. I'm literally ashamed to read them, especially when you know that among the hundreds of candidates, we can choose only one." This confession by the head of human resources in a large company who asked that his name be withheld, is symptomatic. He is not the only one in this situation. Recently awarded a doctorate from Athens Technical University, a young man who also prefers to withhold his identity, and who taught for several months in a technical school, reached a similar conclusion. "My wages were so low that I would often slip into the students' queue at the canteen in order to save money on my meals," he says.

These two witnesses shed a brutal light on the reality of the current labour market. On the one hand there are the impressive CVs and on the other, chronic unemployment and low wages. [The unemployment rate rose to 27.9 per cent in June 2013 compared with 24.6 per cent a year earlier. Women and young people are particularly affected.] One is reminded of the "€700 generation" [the name bestowed on recent graduates at the beginning of the crisis, in 2007] but it's a nostalgic memory because the wages of those employed today are generally (and by a lot) lower than €700 net.

In fact, there are today several "€700 generations". Recent graduates are not the only ones concerned. There are also those over 40 or 50 years old who have lost their jobs. If they find a new one, they cannot expect to ask for more than €700.

For each job announcement, there is a flood of CVs. "When an announcement is published, we receive sometimes as many as 600 CVs in a week. One third comes from highly qualified young people with graduate degrees and who master at least two foreign languages. Applying for the same job, there are older candidates, with less qualifications on paper but with significant expertise and experience. It is very difficult to choose," explains a company personnel manager. But for all personnel recruited, the pre-tax salary is €600. These days this sum is not sufficient to meet people's basic needs and is especially incompatible with the level of studies. Of course, for many entry-level positions in an unskilled job, the wage drops to €300 or €400.

Four hundred euros paid under the table, that is what 27-year old Konstantinos Sp earned last winter for eight hours of work per day in a lawyer's office. Despite his law degree and his master's degree earned in Germany, he had trouble finding a job. "The social taxes trimmed off €150 per month, plus I was spending €45 on my monthly transport pass. What was left to live on? I work with other young lawyers who work all hours, staying at the office burning the midnight oil, to earn €600 or €800 per month. In fact, they are earning less than an unskilled worker. Unfortunately, young lawyers are considered self-employed, not salaried employees," he says.

"[[When I send out a CV, the responses are full of praise: ‘incredible CV, PhD, publications, bravo!’ But no one offers a job]]," says PK, a 30-year-old with a diploma in electrical engineering from the Athens Technical University. Last year, he finally got a job as a teacher at the School of Advanced Technical Studies, then in the second semester he obtained a part-time job at a technical school in Chalkida, [north of Athens]. His salary? €700 and €300 respectively. "It isn't profitable for engineers like me because we have higher health insurance and pension payments. Most of my colleagues have already gone abroad," he says.

‘How can I live on that income?’

Georgia, 36 years old, earned her degree at the Agriculture University. She has a master's degree from the Technical University and talks comfortably in three foreign languages. Her tax return shows revenues of €5,000 per year. "It's true," she says, "because to be paid, I send out bills, I have proof. How can I live on that income?" Jobs have disappeared and wages are falling. The result? "Several years ago, I earned €1,200 to €1,400 per month. In recent years, my salary has fallen to €800. Last year was another bad year. Given my studies and the technology that I use, I should be paid much more. But where will the money come from?"

Unfortunately, the harsh realities of the minimum wage are not relegated to youth but are increasingly shared by older people too. PS worked for several years in the printing industry and earned about €1,500. He was laid off, then unemployed for a year and a half. Today, he has a new job earning €650 – before taxes.