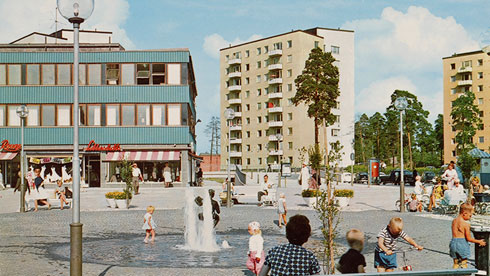 How my city went under

Son of a Swede and a Dane, journalist Viggo Cavling grew up in one of the suburbs hit by the recent violence. He tells the story of how the buildings that carried the dreams of a progressive society have become ghettos without hope.

mibrant2000  | A postcard from the 1960s showing the centre of Hagsätra, a town near Stockholm

The riots that erupted in Husby, the suburb northwest of Stockholm, have spread to nearby Rinkeby and Tensta, to the west of Stockholm, and to Hagsätra and Fruängen, to the south of the capital. These cities were all built under the Miljonprogrammet, a construction project that put up one million housing units in Sweden from 1965 to 1975. Many of these cities were baptised with poetic names, like Lindängen [the meadow of lime trees] in Malmö and Hammarkullen [Hammer Hill] in Gothenburg.

When she met my father, in the late 1960s, my mother lived in Fruängen, in a low building that had just been built and where she was the first tenant on the ground floor. This small studio allowed her to put an end to 10 years of the nomadic life, when she had moved from one sublet to another. My father was living in Copenhagen. The young couple compromised and moved to Malmö, to the District of Rosengard [the Rose Garden], probably the nicest name ever given to a neighbourhood.

After I was born, in November 1969, our family moved into a building in the Herrgarden neighbourhood, on Bennetsväg Street. One of the stories often told in my family is the first journey my mother took by bus right to Rosengard, full of dreams and hopes. Today, the Herrgarden district of Rosengard is ranked by the EU as among the poorest areas of Europe.

When my little sister was born, our father succeeded in getting a three-room flat on the 15th and highest floor of the new Widellsväg building, after having invited to lunch the employee of the HSB housing cooperative. From the balcony he could see the Øresund [the strait that separates Denmark from Sweden], and even glimpse his former apartment building, the Domus Portus, in the Østerbro district in Copenhagen.

Without it ever being explicitly mentioned at home, my mother and my father were carried away by the great momentum for levelling – moving towards the centre – that swept through Sweden after the war. Prime Minister Olof Palme went with the flow too: with his wife Lisbet, of the Swedish nobility, he abandoned the peaceful district of his childhood, Östermalm [in the centre of Stockholm], to resettle not far from Husby, in the new district of Vällingby, among rows of identical houses. To get to his Prime Minister’s office, he turned down the chauffeured car and drove there himself in his little Saab.

This levelling in Sweden hit its peak in 1973. That summer, the robbing of a bank in Norrmalmstorg [a square in the centre of Stockholm] made the headlines. The robber took the bank employees hostage and demanded that the most notorious criminal of the era join him there. And so Clark Olofsson was escorted by police from his jail cell to the bank. Prime Minister Olof Palme immediately broke off his election campaign to get back to the headquarters of the government in Rosenbad and begin negotiations.

In keeping with the spirit of the times, the hostages began to feel sympathy for the criminals [the psychiatric term "Stockholm syndrome" originates in the event], who were worse off than they were. The female bank cashier phoned Olof Palme directly to present the demands of the hostage-taker: a sum of money, a car and safe passage.

When police freed the hostages a few days later, the drama was broadcast live on Swedish television, and Palme hurried to the scene to hold an improvised press conference in the middle of the night. A few months later, in the fall of 1973, the outcome of the elections confirmed this shift to the centre. Tied, the political blocs each got the same number of seats in Parliament. Palme, a Social Democrat, was re-elected to head the government and to look for support from the Centre party. When the politicians could not agree, the problem had to be decided by drawing lots. Was a nation ever as close to consensus?

The levelling, however, ground to a halt in the 1970s. The growth in the gross national product of the 1950s and 1960s had ended, but not the increase in wages, which triggered runaway inflation. When Palme was defeated by the conservatives in the next election, he declared that “the table was set” for them already. In reality, the right inherited a real quagmire. That helped the Social Democrats return to power in 1982. A secret election strategy committee, led by the future Minister of Finance, Kjell-Olof Feldt, resolved to give up the goal of full employment to encourage lower inflation. The levelling movement had passed its zenith. According to the latest statistics of the OECD, Sweden is now showing the greatest growth in income disparity in western Europe.

Nationality did not matter

The Cavling family thrived in Rosengard. The district consisted of the south, of rented houses, and the north, of housing co-ops, where we lived. The two areas were separated by a four-lane road, the Amiralsgatan. Those who moved up and out of the enclaves were generally affluent workers, lower-ranking officials and independent workers like my father. My father kept the apartment as an office until his death in 1983. My mother tried to sell it, but no one wanted to buy it, so we had to hand it back to the housing cooperative.

Our new home was a townhouse. As in Rosengard, we were in an area where cars and people were kept well apart. Among our neighbours were the Billströms, Social Democrats. Their son Tobias, red-haired and obstinate, became a member of the Swedish Young Conservatives [the youth wing of the Swedish Moderates Party].

Highly active since the 1980s, Swedish Young Conservatives encouraged their members to join the student council boards in schools. And so Tobias became the student representative in his high school, which was quite dilapidated. Instead of asking for money from the municipality, Tobias wrote the Pope and appealed to his generosity. The positive response of the Catholic Church sparked a long article in the regional newspaper Sydsvenskan. Today, Tobias is the Swedish Minister for Migration and Asylum Policy. In the street where we grew up, 10 per cent of the voters voted for the xenophobic Sweden Democrat party in the last election [the party won 5.7 per cent of the votes in the national elections of 2010, entering Parliament for the first time]. When we were young, though, where people came from did not matter.

In recent days Swedish newspapers have been overflowing with articles on Husby and the other suburbs from the same era. It’s a multifaceted image that emerges. On one hand, institutions such as midwifery clinics, the post office and banks have recently been shut down. On the other, a social programme has thrown millions of crowns into the neighbourhood. The school of Husby has more resources than many others in the Stockholm area, yet only 64 per cent of the students leave it with a diploma. A total of 65 per cent of the 12,200 inhabitants of Husby are foreign-born. Thirty-eight per cent of youths between 20 and 25 years of age do not study, and they have no work. Recently, they have lost their eligibility for special rates on public transport. When one hits bottom in Husby, there is nothing to do and no way to get out.

I see a common thread between these young people and the prisoners on hunger strike at Guantanamo Bay. They have nothing to lose. Their only weapon is their body. The Conservative government says that all work deserves to be paid, but at the same time, thanks to low inflation, we have a high-efficiency society.

A worker at the Scania truck plant produces four times more these days than a worker of 20 years ago. Most unskilled jobs have been gotten rid of through rationalisation, and the competition for the few that remain is fierce. There can be hundreds of applicants for a job as a night janitor. The pay is miserable and the working conditions are even worse.

I think 99 per cent of the stone throwers are boys or young men. They’re not fighting just the police and the firefighters. They’re struggling with their own self-image.

At Swedish schools, boys get lower marks than girls in all the subjects. A few years ago the boys were stronger in the technical disciplines, but when the students were required to communicate about what they were doing, the girls surpassed them there as well. Today Sweden is awash with young and intelligent girls, "the New Swedes of the first generation" [children of the first generation of immigrants]. The most popular is Gina Dirawi [born in Sweden in 1990 to Palestinian parents from Lebanon]. She began her career by creating amusing short films that were posted on YouTube. Just a few years later, she was presenting the [national] Eurovision Song Contest. And there are many others like her.

There is, however, only one example of a male who has climbed from the bottom to the very top – football player Zlatan Ibrahimovic, who was born and grew up in Rosengård in Malmö. Last week, he declared his ambitions as a member of the Swedish national team. Zlatan wants to be the best player of all time and score the most goals ever. He still has 11 more to go. Bicycling from central Malmö to Rosengård, one passes through a tunnel. At the entrance of the tunnel it is written: “You can take a boy out of Rosengard, but you cannot take Rosengard out of a boy. Zlatan.”

For some, the suburb becomes like a medal that is worn for a lifetime. But this is true only for those who leave it. For those who stay behind, it is a caste mark impossible to rub off.

Regardless of the number of stones they throw or how many cars they torch. This caste mark will just get more and more visible

In the new Sweden, there are many who are living better than before. Like me. I live in the city centre, I earn more than decent money, and I can wander the whole world. I am constantly pulling away from the centre. At the same time, I’m terrified by the fear of failing and hitting bottom. I know that, if I find myself there, no one can save me. My children and I would be as lost as those who are throwing stones.