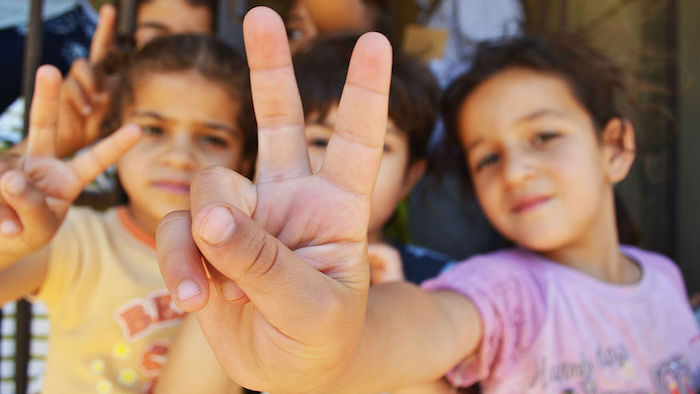 To present an asylum request to an EU member state, refugees need a visa, which these days is virtually unobtainable. But member states could, if they wanted, easily release humanitarian visas. The story of two Syrian families who entered Belgium thanks to the actions of a group of citizens shows that this can be done.

Anne-Laure Losseau is a young Belgian commercial lawyer. Until a few months ago she knew nothing about rights to asylum. "One day", she remembers, "I saw these images of Syrian children literally freezing to death in refugee camps." That was the day she decided to act, "as I was able to, but in a concrete way". With a group of citizen activists, Anne-Laure started the "Syria, one visa - one life" initiative, which allowed two Syrian families to come to Belgium legally after they had received a humanitarian visa.

The 2009 European code on visas allows visas to be given "by way of derogation" on humanitarian grounds – a possibility already guaranteed at a national level in several EU member states. The criteria for granting a visa are not set in stone, and it is not possible to appeal if the request is rejected or declared inadmissible. The humanitarian visa, some in Belgium say, "is a favour, not a right."

This residence permit is often presented as a solution to the paradox of the right to asylum: everybody has the right to seek protection in a foreign country, but today, virtually no refugees have the right to come to the country where they want to ask for this protection. For that they need a visa, and obtaining a visa is all but impossible.

It is the case for Syrians, who have a very good chance of winning asylum in Europe, but who are forced to risk their lives to reach the continent. It is out of this paradox that the idea was born of helping one or two Syrian families to present a request for a humanitarian visa.

Anne-Laure did not immediately come to this solution. First off, she thought she might be able to help a Syrian family enter Belgium on a tourist visa. So she phoned the Foreigners Office, the public organisation "tasked with managing the immigrant population", to ask for its opinion. "They pointed out that to get a tourist visa, you need to prove your willingness to return to your country of origin. That's hardly realistic for Syrians," Anne-Laure recalls. She then sought the advice of a lawyer specialising in asylum rights. "She suggested creating a group of people prepared to get involved with me and to organise a meeting in her office."

The first meeting took place on 12 February last year. "We said we should build up to some concrete action, and that's how the idea was born of helping one or two Syrian families present a request for a humanitarian visa." Ghazi el Rass, a Syrian pharmacist living in Belgium for the past forty years, helped the group chose two little girls needing emergency operations: Marwa, wounded as she tried to escape a bomb strike with her family, and Haifa, who was suffering from a heart defect. In March, the group "Syria – one visa, one life" officially presented its project.

The two little girls, along with their families, had to make a clandestine border crossing into Turkey, where they met Ghazi el Rass and Anne-Laure. On 19 June, they submitted their request for a humanitarian visa at the Belgian embassy in Ankara. "We were told that the wait could last up to six months, because requests for other kinds of visa take priority," Anne-Laure explains. "It's likely that our presence there sped up the procedure." Less than two weeks later, an email from the embassy told them the request had been accepted.

The two families landed on 29 June at Brussels-Zaventem airport, where a small welcoming party was waiting for them. They now live in two flats supplied by the municipality of Forest, in Brussels. With the support of the citizens who welcomed them, the families have begun to tackle new challenges: the first appointments with doctors, searching for a school for Marwa, Haif and their brothers, and their asylum application.

"We still don't have a clear idea of how we will continue with this initiative," Anne-Laure tells me when I ask what the next objectives are for her group. "We could begin with other families or work as intermediaries for other interested citizens to follow in our footsteps."

This story has a happy ending then. But it throws light on the petty-mindedness of EU member states, who have been requested by NGOs, lawyers and even the European Commission to use humanitarian visas in a coordinated and systematic way. Instead they prefer to benefit from the ambiguity of the regulation on residence permits, continuing to give them out as if as "a favour and not as a right". And, at least in Belgium, humanitarian visas are chiefly distributed for family reasons: if someone has not managed to re-assemble his or her family and is in a dangerous situation, the Foreigners Office can give, exceptionally rarely, permission to rejoin one or many family members in Belgium. That is why the story of Marwa, Haifa and their families, who had no one in Belgium, is so unusual.

"Humanitarian visas: choice or obligation?" Ulla Iben Jensen, researcher and author of a study for the European Parliament, asked in 2014. A new reply could come from revising the visa code, launched last year by the European Commission and received without much enthusiasm by the EU Council. The European Parliament is currently preparing a report responding to the Commission's proposals. In June, the Progressive Alliance of Socialists and Democrats announced that it would defend "a framework" to reinforce the tool of humanitarian visas. The report will be put to an MEPs' vote in the autumn and we will have to hope that it will shake member states into action.