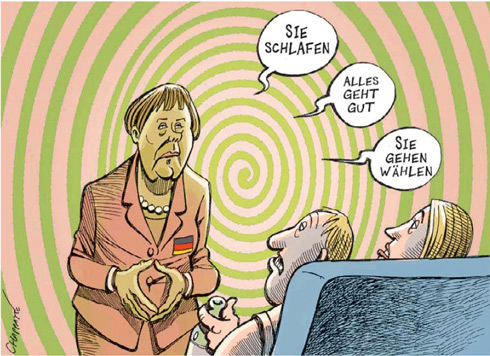 Go to sleep. Everything's fine. You are going to vote.
With a few days left to go before September 22 elections, the German Chancellor can relax, certain in the knowledge that her victory is almost a foregone conclusion. According to the latest polls, her CDU party will win 39 per cent of the vote, as opposed to 25 percent for the second-ranked social democrats.
The most recent phase of the election campaign, in which the gestures of the two main candidates have attracted more interest than their speeches, has been criticised for its lack of content and seriousness.

You may unsubscribe at any time. Your email address will not be shared with third parties. *
Categories
SocietyGermany