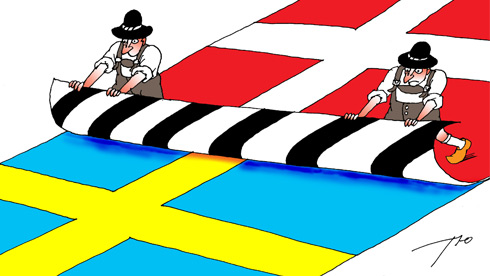 Identical twins – or Cain and Abel?

Few European countries are as similar as Denmark and Sweden. But while the states are becoming more economically integrated, their populations remain divided, writes a Stockholm-based Danish political scientist.

”Do you know that everything that is not forbidden in Sweden, is mandatory?” This is a joke that has been circulating in the corridors of the Danish political scene for years. Naturally, everyone knew that it wasn’t true, but it got a lot of laughs. It was part of our low-key, standard teasing between neighbours.

Seen from the rest of the world, Sweden and Denmark look very similar in terms of legislation, the voluntary sector, and culture. The bickering over trivia, the sarcasm about the idiosyncrasies of each other helps, here as elsewhere in the world, to shore up a national identity, with both good and bad consequences.

For 10 years now, though, there has been a growing impression that this friendly bantering between Sweden and Denmark has given way to genuine antagonism, and at times to a frankly hateful climate in public debate. ”In Denmark, you can hurt people in the name of freedom of expression,” you hear people say in Sweden, while in Denmark the Swedes are described as rigid prisoners of the politically correct, ”too afraid to talk straight” in the immigration debate. You will have noted the generalisations – the first rule of all good prejudice. It’s the Swedish people against the Danish people. Where stereotypes abound, the internal debates within the other country are ignored.

As a Danish national living in Stockholm since the end of the 1990s, I have followed these developments with growing unease. While the bonds between northern and southern businesses are quickly growing stronger and while opinion in favour of this cooperation is still very strong, some politicians and elements of the media on both banks of the Øresund have embarked on a misguided campaign to make the other country a whipping boy.

My theory is that warnings on “the situation in Sweden” or “the situation in Denmark” primarily serve the purposes of domestic political wrangling. Today one can say almost anything about the next-door neighbour, because it is a discussion about, not with the other country. In both countries, the political debate is taking place almost entirely within the national context, and knowledge of the life and political debates of the neighbour are shockingly low.

Let's look at one of the areas where Swedish and Danish debates are probably the most divergent, and where the fallacies, myths and prejudices are the most common – namely, immigration.

Until recently, the debate on immigration and (the rates of) integration held a much more prominent place in Danish politics than in Swedish politics, and Denmark took a tougher stance on the subject. A paradox, considering that it is Sweden that takes in the most immigrants. Ten per cent of Danes were born abroad or have parents who were both born abroad, compared with 15 per cent of Swedes.

[[“Swede-bashing” has long been the hobby of the Danish People's Party]] [populist]. During the recent Swedish elections in 2010, though, the foreign affairs spokesperson of the liberal [Venstre] party, Michael Aastrup Jensen, made statements in the media about Swedish ”censorship” – and proposed that international observers be sent to monitor the Swedish elections. It was the first time that a representative of a party in power had made this kind of comment on its neighbour.

The start of the affair was the decision of [the private Swedish channel] TV4 not to broadcast a controversial campaign ad from the Sweden Democrats [far right], where women in burqas hurried ahead of a retiree pushing a walker to get to the welfare office first. In return, the spot was aired on Danish public service (DR2) and the party secretary of the Sweden Democrats, Jimmie Åkesson, was given five minutes of uninterrupted speaking time (and eloquent banality). Danish criticism was also directed at the Swedish electoral system. While some criticisms were valid, most suffered from poor knowledge of the subject.

Let us not forget, however, that both countries are facing the same severe problems in integration of foreigners. There is little doubt that it is much more difficult to be an immigrant in the Nordic companies, which have been homogeneous until now, than it is to immigrate into the United Kingdom or the United States, for example.

[[The major difference between the debates on immigration in both countries is undoubtedly political]]. If, at European level, the xenophobic parties and those hostile to immigration have the wind in their sails, it is mainly because the conservative and liberal parties have accepted the support of these parties, as in Denmark, or have brought them into their governments to ensure a parliamentary majority, as was the case in Austria, in the Netherlands, and now in Norway.

Following the 2010 election in Sweden, the Fredrik Reinfeldt (right) government chose to turn its back on the far right, preferring to take its chances as a minority government, with all the problems that that brings. The election of September 2014 will tell us if this strategy has been a winner.

Northern Europe is no doubt at the dawn of a revival. Everything indicates that the conditions for more cooperation between the Scandinavian, Nordic and Baltic countries are in place. It would be a shame to let the myths and the cliches get in the way.