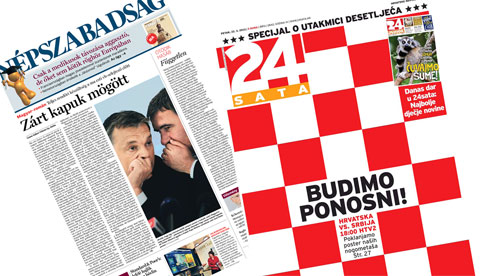 In Budapest and Zagreb, football is political too

Tensions are running high ahead of of two March 22 World Cup 2014 elimination round matches, but for different reasons.

In Budapest, the Hungary-Romania match will be played "behind closed doors," headlines Népszabadság, as a punishment by world football governing body Fifa, following a series of anti-Semitic chants and banners from Hungarian fans directed at Israel during a "friendly" match between the two teams on August 15.

The police will be on high alert during the match between the two neighbouring countries, whose relations are currently strained by the issue of the Hungarian minority in Romania. The “ultras” and the far-right Jobbik party have organised a “national rock” concert for the occasion.

In Zagreb, it is the age-old conflict between Croatia and Serbia that has the authorities worried. Since a 1990 general brawl that broke out during a game between Dinamo of Zagreb and Red Star of Belgrade, football stadiums have become the theatre for clashes between supporters of the two countries. Tensions between Zagreb and Belgrade have revived recently following the acquittal of the Croatian general Ante Gotovina by the Criminal Tribunal for the former Yugoslavia.

While the 24 Sata tabloid has decked itself out in Croatian colours to proclaim “We’re proud!”, the Croatian capital “is in a state of siege”, writes Jutarnji List Some 1,500 local police officers have been mobilised for the match, helped by Serbian colleagues with experience in the fight against the extremists. Already sanctioned by international football bodies for violence by supporters, Croatia and Serbia have agreed to not organise travel for their supporters to avoid spillover. The Croatian police has warned that the match against the Serbs could be interrupted at any moment if nationalist songs break out. That would hurt mostly the Croatian national team, the leader (along with Belgium) in its group, reports the Croatian daily.