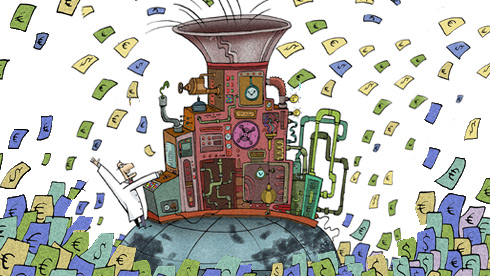 In the heart of the machine

The troika is the best-known tool used by the EU and IMF to aid European countries in dire financial straits. In Luxembourg, though, there are two institutions, discreet but crucial, the EFSF and the MES, that are responsible for coming up with the money.

In a side street at the edge of the European Quarter in Luxembourg stands a white, three-storey building. The restoration work on the facade is still underway and the building displays a discreet symbol that only attentive passers-by note: ESM. It’s a building much like the others, flanked by offices and home to major global financial institutions and commercial establishments. Inside, however, something singular is going on: more than 100 people are working on one of the most impressive achievements of the European governments during the crisis.

EFSF and ESM are the initials in English of the European Financial Stability Facility and the European Stability Mechanism, the Eurozone’s emergency funds. The first funded one-third of the €78bn that has been lent by the troika to Portugal since 2011. The second, which is replacing it, is the permanent Eurozone anti-crisis mechanism and its capacity amounts to €500bn. If Portugal still needs financial support, a new bailout plan or a backup programme when its adjustment programme ends in May 2014, it will have to appeal to the ESM.

In Luxembourg, a team is proud of having proved, after three years of difficulties, that it is able to respond to the needs of the markets and of governments, even if the latter pop up at the last minute.

It all started in May 2010 with the first bailout of Greece to the tune of €110bn, still funded by bilateral loans from Eurozone member states combined with the money of the EU and the IMF. Confident that the crisis would be resolved, the governments of the Eurozone decided to set up a financial vehicle, based in Luxembourg, with a small staff, that would be capable of lending to countries in distress – all the while believing, though, that there would actually be no need for it. The idea was to reinforce the Greek solution to halt the contagion, and the name the fund was baptised with underlined this: the European Financial Stability Facility.

“[[Initially, the idea of the EFSF as an institution with 15 staff was to put up a defence that would never be used]],” Rolf Strauch, 47, Member of the Board of Directors of the ESM and the first person to be hired by Klaus Regling, President of the EFSF and the ESM, confirmed to Negocios. Responsible for the strategy and the economic and financial analyses of the European rescue plans, Strauch joined the institution in its infancy, arriving from the ECB at the start of July 2010, after the first Eurozone rescue funds had been rolled out.

Founding an institution is a memorable experience. The decisions focus on the basics and mistakes can be costly, says Christophe Frankel, 51, Deputy Executive Director, the fifth to arrive in Luxembourg to create the EFSF, from Paris, where he worked in the private sector.

“We had no computers, no photocopiers, not even paper: we started with nothing, not even staff – when hiring a small team, all the choices are very critical”, said the head of the departments responsible for debt issues, investments and loans to governments. The services now work in a ground floor office with a computer with three monitors.

João Giao was one of these critical new staff hired. Leaving a job at the CMVM, the Portuguese Securities Market Commission, he was the 12th person to arrive in Luxembourg, to round off the initial team of the EFSF.

Gião, 36, is currently a key actor in the legal department of the EFSF and the ESM. “The main difference between us and a classical institution is the political factor: while a private company follows a business plan and manages its resources accordingly, an institution like the ESM cannot follow any such planning: we must be ready to respond to the decisions taken at the political level”, Frankel says.

“[[The most nerve-wracking moment came at the end of 2011, when we had to put together a debt issue, because the member states needed money. But the market conditions got tougher and the debt issue became more difficult]],” recalls Christophe Frankel, responsible for the financing of the EFSF and subsequent loans to countries in distress.

This was when the EFSF changed its financing strategy. Until then, the funds went to the market to look for the same amounts of money, with the same maturities, as those they loaned out to countries. In November 2011 “we adopted a diversified funding strategy, separating our financing from the needs of the beneficiary countries”, Frankel explains. This is still the rule today: the emergency funds issue debt based on several maturities and the best opportunities. The trials of the EFSF on the ground let it learn from experience, while at the same time, European leaders felt the need to put in place a permanent rescue institution for the Eurozone. At the end of 2012, the negotiations were successful and the European Stability Mechanism (ESM) was born, heir to the EFSF, which it will take over from, under the management of the same team.

The European Stability Mechanism came with a different logic, with which it sought to compensate for the failures of the past. “From a legal point of view, the EFSF and the ESM are very different”, João Gião explains. “The EFSF is a private company governed by Luxembourg law and its debt program is based on a system of guarantees of the Eurozone member states, that should ensure its rating level.”

Conversely, the “ESM is an international financial institution”, the specialist stresses, and as such, it is governed by the “public international law”. In addition, “the system of safeguards has been replaced by a capital of (€80bn) underwritten by the ESM, which is now one of the pillars of the credit quality of the ESM”.

What began in the summer of 2010 as an investment vehicle envisaging a staff of 15 and that was never meant to be used has become one of the largest issuers of European debt, funding adjustment programmes valued at €240bn in five countries and with a staff of more than 100.