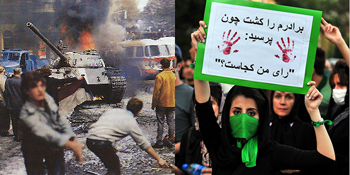 Michelet, in his famous history of the French revolution relates the story of an aristocrat disguised as a peasant, fleeing Robespierre’s Terror for the safety of what it is now Belgium. Feeling peckish while still in France, he entered a tavern.

When invited to order, he eagerly called for a twelve egg omelette, and thus sealed his own fate.Unmasked as a toff, he was dispatched back to Paris to, one suspects, an unpleasant fate. Such a story springs to mind after a recent article covered here at Presseurop. British Airways, it seems, is doing so badly that CEO Willie Walsh has sent out an invitation to the company’s 40,000 employees that in order to “fight for our survival” employees should go without wages for up to a month. Walsh strangely believes he can lead by example by proudly announcing that he will forgo his own July intake, a modest £62,000 pounds out a total of £743,000 per annum “basic”. This is nearly seventy times more than the annual wage a member of cabin crew pockets. However, Walsh still expects “volunteers” to turn up by June 24 and share in his vast sense of personal sacrifice.

There is something so blitheringly stupid about Walsh’s idea that it has a whiff of the Ancien Régime about it. And who says Ancien Régime in 2009 suggests that our crisis ridden time is ripe for revolt. But wait. Since last year’s May 68 commemorations, it seems that not a week goes by without someone wondering if we’re not entering a new patch of historical turbulence. Witness a recent piece in the New Statesman by Andrew Hussey, in which he focuses on Olivier Besancenot’s NPA (Anti-Capitalist Party) apparently the darling of French youth, and very much a party that sometimes wittily exploits the great abyss that lies between the great and good's perceptions of life’s trials, and those of us muddlers on planet Earth.

Witty, but not nearly so captivating that Besancenot could talk a single seat out of France’s fed up electorate in the recent European elections. The answer might be in the party's name. NPA might be anti-capitalist, but the moniker fails to suggest a direction forwards. A look at its manifesto and what you get is the long road back - a call to salvage the remains of the welfare state, in other words a sixty year old post World War 2 consensus. Nothing wrong with that as such, but hardly surprising then that French writer Julian Coupat should have said in an interview with Le Monde that NPA has got something of the “Stalinist grey” about it.

It may be all journalists’ dreams, and yet, all these 68 headlines suggest there's a longing out there for the intoxications of the past, the dangers of doing over a cynical old order. Among the moody young, there's definitely much apprehension as to what that unlikely philosopher Johnny Rotten once called the “third-rate reality” we live in. Right now, there can't be anything more redolent of a third rate reality than what Iranians bore witness to last week, when a creaking power most probably frauded its own re-election. There’s something so compelling about watching millions of protestors in the streets of Teheran asking for their vote back that we would rather forget that the people’s champion Mir-Hossein Moussavi, as several commentators have pointed out, has also got a big streak of Stalinist grey running through his soul. Now that the mood in Iran sours, as the regime looks to be brazening its electoral theft out, Libération editor Laurent Joffrin is apologising for the left-leaning French daily's jumping-the-gun "Teheran Spring" headline last Saturday. And yet, couldn't all these Iran and 68 fantasies suggest that here in the west there's some as yet inarticulate sense that our freedom is also thwarted? Maybe. In the meantime, though, in the absence of any credible alternative, our leaders can go on ordering giant omelettes.