Is Ireland looking into the abyss? 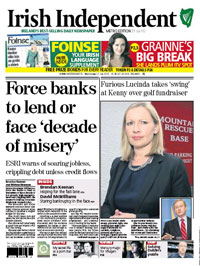 “Force banks to lend or face ‘decade of misery’,” leads the Irish Independent, following the release of a report by the Economic and Social Research Institute. The economic think-tank, headed by John Fitzgerald, son of former Taoiseach Garret, has warned that if national banks continue to deny credit to businesses, the country faces “a decade of low growth, high unemployment and crippling debt”. Said Mr Fitzgerald, “One of the problems is that banks seem to have lost the skill to lend real money to real people. We may have to adopt the ‘foie gras’ approach to the banks: stuff them with cash, then kill them and eat them.”

Despite the alarming absence of real money circulating through the economy, the report nevertheless argues for more budget cuts to sooth international markets: “The €7.5bn correction which the Government plans for the next five years is the absolute minimum needed,” said Mr Fitzgerald. The cuts will see a loss of 40,000 jobs in the public sector, the Dublin daily notes, adding that interest due on 10-year Irish government bonds has risen to a “whopping” 5.5 percent.

In an article less than optimistically entitled “Staring down the barrel of bankruptcy”, David McWilliams wonders why interest rates for Irish debt are rising. The answer – “Because the risk of a blowout here is rising — it really is that simple.” The economist argues that the national debt, increasingly burdened by bail-outs for zombie banks and plunging tax revenues is “heading inexorably towards 100 percent of GDP.” To avoid a debt spiral, the growth rate must be greater than the rate of interest on debt. However, as the national growth rate will probably fail to reach 6 percent for a generation, the country is locked into a logic of massive tax hikes and deep cuts.

“But the more you cut and tax,” McWilliams bleakly predicts, “the less the growth rate and the more the efforts to cut the debt fail.” Meanwhile, in a surreal twist, national banks, “stupidly trying to save”, have announced a hike in mortgage rates. “In a situation of rising negative equity, rising unemployment and rising taxes, higher monthly interest payments will obviously lead to increased defaults.” Financial markets are penalising Ireland quite simply because “they see the steady path towards bankruptcy.”