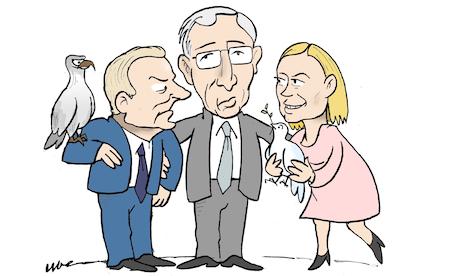 Is this the “dream team”?

we still don’t know if it’s a “dream team”, but there’s little doubt about the fact that this new team will hardly do worse than the outgoing one. […] The choice for Tusk and Mogherini was not obvious in the current euromiserable context: both support a strong Union, especially in the defense sector.

Quatremer also notes that Tusk comes from a country that “isn’t member of the Eurozone”, that he is “against abortion, same-sex marriage and euthanasia” and that “he does not speak English well and French at all”, contrary to Mogherini, “even though he is fluent in German and Russian”. The Italian minister “only suffers from her lack of experience in Foreign affairs issues”.

For the French journalist though, Tusk and Mogherini’s appointment “unequivocally
bear Berlin’s mark” —

German chancellor Angela Merkel was in favor of the Pole, an Eastern ally to Germany. […] She also was in favor of Mogherini, as Italian Prime minister Matteo Renzi promised that a German would replace the French Pierre Vimont as head of the External Action Service, the armed wing of the European diplomacy. That’s probably the biggest lesson of this latest round of appointments: Germany is dominating the Union, as the economic and budgetary policy it has imposed to the eurozone since 2010 shows.

Quatremer notes that Germans occupy many EU’s key positions and that, “thanks to France’s weak position” in the European Parliament, “Strasbourg has become de facto Germany’s Parliament third chamber”.

Federica Mogherini’s appointment “is a success for Italy and a recognition to Matteo Renzi, who currently leads the EU and is seeking to establish himself as a European leader” notes La Stampa columnist Cesare Martinetti. But the Italian minister will have to deal with the “widespread skepticism” in Europe, he adds, and quotes the “concerns recently expressed by the Financial Times and Le Monde, both disapointed by the High representative’s profile: almost unknown and with little international experience”.

According to Martinetti, Mogherini —

will have to become what she did not manage to be yet as a Foreign minister: credible, charismatic, recognisable and recognised as such from the Balts to Portugal, from Finland to Cyprus. And to do that, […] you need a foreign policy that represents Europe and its interests everywhere in the world. Something that the outgoing High representative, Lady Ashton, could not manage to do, nor did Javier Solana before her.

Tusk and Mogherini’s appointments “respond to the need for balance between geographic and political zones, according to Brussels’ traditions. And that is logical”, Martinetti continues —

the real problem is what the European Union wants to be: an addition of States that offset each other or a single and united entity? On this issue, unfortunately, there seems to be no progress from the usual intergovernmental humdrum that dominated European politics in the last years and that expresses low profile men and women who should not overshadow the national governments’ choices and actions. To make the difference, there was the need for a “heavy hitter”. Will Federica Mogherini be that “phone number” Henry Kissinger wryly said he never found when he needed to talk to an abstract subject called Europe?