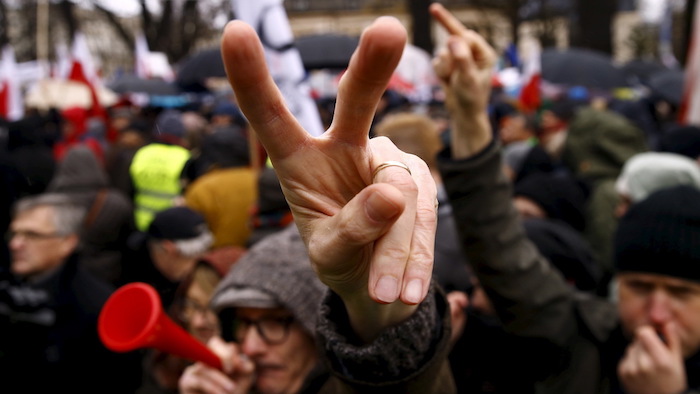 Is Warsaw on the road to democratorship?

The radical changes the newly elected conservative government is willing to introduce in the country’s main institutions triggered a series of demonstrations by its supporters and opponents in the past few days. The Polish press wonders whether democracy is at risk.

On December 12 and 13, the streets of Warsaw saw two large demonstrations assembling tens of thousands of people. The first in support of the Constitutional Tribunal independence was organised by the grassroots Committee for the Defence of Democracy. The other supported the government of Law and Justice, which aims to limit powers and take over control of the court. Is democracy in Poland at risk and is the country walking down the road to democratorship? Since the elections in October, when it won absolute majority in the parliament, the camp of Law and Justice (PiS) has launched a programme of introducing radical changes in Poland, often facing accusations of breaking democratic rules. The new Sejm, dominated by Law and Justice, quickly cancelled the nomination of five Constitutional Tribunal judges appointed by the previous parliament and appointed another five of its own choice. When on December 3, the Tribunal ruled that the nomination of three out of the previous five judges was valid, and on December 9 decided that the Act on the Constitutional Tribunal amended by PiS was largely unconstitutional, the government restrained the publication of the ruling, which prevents its coming into force [Update: the first ruling was finally published on December 16].

That caused a constitutional crisis in which the future of the only state body capable of checking the controversial plans of Law and Justice is at stake. The plans include introducing a new tax on bank assets and supermarket networks, taking over control of the media, and a restrictive anti-terrorism law. According to Gazeta Wyborcza –

Censoring the rulings by the government strips the Tribunal of its independence and monitoring function.

In an interview to Newsweek Polska, the head of left-wing Krytyka Polityczna Sławomir Sierakowski believes that –

having paralysed the Constitutional Tribunal, whose rulings will be discredited, the parliamentary majority will actually take the powers of a supermajority. [Law and Justice leader Jarosław] Kaczyński will now be able to push any bill through the Sejm, including ones affecting the state constitutional bodies.

In an interview for the right-wing weekly Do Rzeczy, Ludwik Dorn, former deputy PM in the PiS government and a political commentator today, explains the latest PiS moves referring to the concepts of normative state and prerogative state created by German political scientists Ernst Fraenkel. Even though he sees “no threat to for civil liberties and democracy”, Dorn believes that the rule of law is at risk in Poland:

The Constitutional Tribunal is a key institution of the rule of law. Kaczyński is convinced that if his reforms can’t be carried out within the framework of normative order, the normative state should be pushed outside the current institutional structure and replaced by […] the prerogative state [which exercises unlimited arbitrariness and violence unchecked by any legal guarantees].

During the electoral campaign Law and Justice was building the image of a predictable right-wing European political party. Today it appears as a party fighting on all fronts and at the same time hiding within its hard core. Now it may turn out that its campaign promises placing a burden on the budget will not make the citizens happy. So if the party cannot produce more bread to survive, it will need more circuses.