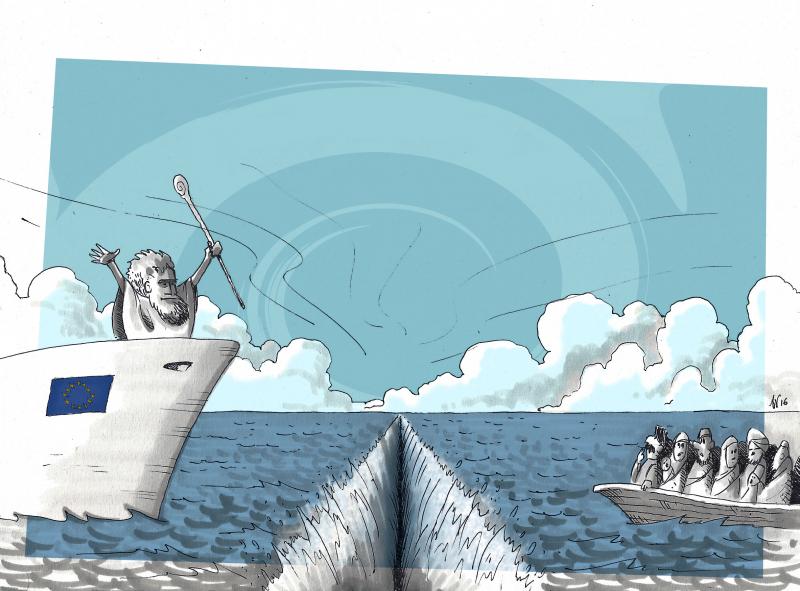 It’s not a sin to talk about migration

Now is the time to call out political leaders who play with religion and whip up hatred for political advantage, argue Roger Casale and Piotr Maciej Kaczyński.

The beheading of history teacher Samuel Paty, followed by the murders of three Christian worshippers at the Notre-Dame cathedral in Nice are brutal reminders of the challenge facing Europe when it comes to issues of religion, race and identity.

French president Emmanuel Macron’s response has been powerful, considered and yes, emotional. He has the support of all who care about the values of the French republic and the future of Europe.

But there is still an obvious danger that populist reaction and rhetoric will overwhelm the public debate and further polarise communities. When it does so, will rationalists be able to silence those who want to depict all people of Islamic faith as potential terrorists? Will Catholics side with right-wing extremists or defend civic space and the rights of minorities?

Ironically, these scenes are unfolding at a time when religious leaders and others are trying to start a new conversation about migration and identity based on understanding and consensus.

In the aftermath of the fire which destroyed the Moria refugee camp, the World Council of Churches issued a statement in which they said:

“Solidarity should be the guiding principle governing migration and particularly refugee reception. We expect the EU to reject the discourse and politics of fear and deterrence, and to adopt a principled stance and compassionate practice based on the fundamental values on which the EU is founded.”

As Dounia Bouzar, an expert in the study of Muslim communities in France, put it in Middle East Eye: “Blanket characterization of the enemy is part of all ideologies that lead to violence. It’s one of the ingredients of totalitarian thinking, for jihadists as well as for fascists.”

In Malta last year a dog saved by the army received more media attention than a group of twelve people who drowned in the Mediterranean. A ship, authorised by the Government, had tried to remove the refugees from Maltese waters - itself an illegal act.

Meanwhile the English channel has also become a graveyard for migrant families and their children, along with the Mediterranean sea.

What has been the response of the European institutions? The  European Commission has recently published its proposals for a New Pact on Migration and Asylum for Europe.

A central aim of the strategy is to return failed asylum seekers. So migration is still seen as a threat – something to be dealt with primarily as a security issue. In the USA, Trump talks about walls. In Europe we are actually building them. As citizens, we need to ask what this tells us about ourselves, about our values? Why are refugees are feared, and not welcomed?

The idea of migration

Part of the answer lies in of what we might call the “will-o’-the-wisp” fallacy (or ignis fatuus in Latin). We confound the idea of migration with the reality. All kinds of sinister thoughts seem to befuddle some people’s minds at the mention of the word “migration”.

In reality, refugees are people in need and have the right to come to Europe. Migrants contribute and enrich European culture and society, raising per capita income as they do so.

In her State of the Union address, Ursula von der Leyen  said: “We will take a human and humane approach. Saving lives at sea is not optional.”  Despite these words, the new Migration Pact will do little to prevent migrants dying at sea. Each EU member state has discretion in answering that question. Many do not seem to believe that safe and legal routes for refugees are compatible with our so-called “European Way of Life” (EWOL)?

The great advocates of defending EWOL are populists like Viktor Orban, Matteo Salvini and Jarosław Kaczyński. They claim to know what it means and behave as if they own it. They appear to believe that Europe is exclusively Christian.“We don’t see ‘these people’ as Muslim refugees. We see them as Muslim invaders,” said Viktor Orban.

Yet when it became clear that eleven out of the twelve migrants who died off the coast of Malta were Christian, no European leader protested. As one migrant, Roger from Ghana, who we met in a camp on Samos earlier this year, told us: “I am Christian, he is Muslim, over there are Christians, and behind there is a Muslim family. We are all brothers here”. We should listen to Roger’s voice because there are lessons here for the whole of Europe.

Populists may think they are talking religion. In fact they are seeking to weaponize it. They talk about their “Christianity” but what they really mean is race. These don’t just want a Fortress Europe, they want one with racist foundations.

Or as Manuel Delia, a Maltese journalist, put it “when whites hunt for migrants, and make the public believe they are a terrorist threat, we have a problem of institutional racism.”

The attacks in France will embolden those whose agenda is to leverage bigotry and xenophobia. So it is important to look closely what it is faith leaders actually say.

As Maltese MEP Roberta Metsola pointed out to us “the risk when we talk about migration is that we forget we are talking about people”.

In an address for the Catholic Church’s World Day for Migrants and Refugees on 27 September 2020, Pope Francis spoke about those “Forced like Jesus Christ to flee”.

Whether or not we see ‘the face of Jesus’ in those of migrants and refugees, we should welcome a discussion and debate about our responsibilities as global citizens.

In his address, Pope Francis set out six pairs of words to frame a new reflection about the issue of migration. We list these with our comments and responses below:

Migrants are people with stories to tell and not just numbers. But statistics matter, too. At the end of 2019, there were 79.5 million displaced people worldwide. In the same year the EU took in 123,920 refugees and irregular migrants, a mere 0.016%  (IOM figures). Is this what we mean by a “migrant crisis” in Europe.

We also need to recognise that populists make the false claim that migrants are bringing COVID-19 to Europe, to drive a more exclusionary agenda. Instead, we should address the fact that migrants have limited access to protection. And as Bright, a refugee in Samos told us: “We refugees have been here since before the virus.”

Giving migrants a voice is perhaps the most empowering action we can take. But as Sonia Nandzik, who runs an NGO called ReFocus Media Lab, where young people tell their stories about the Moria refugee camp, told us: “How is it that Western media are only interested in images of disasters? Why do so few care or want to listen?”

Sharing is at the heart of the new pact for Europe. But the focus is on sharing the “burden”. Isn’t it time to challenge the idea that migrants are a “burden”? As Pietro Bartolo, an Italian doctor from Lampedusa turned MEP puts it: “They (migrants) constitute an opportunity, a wealth from the demographic and cultural point of view”.

A top down approach should not be paramount in framing policy. We would make much better policy if we listened to the voices and experience of refugees

This calls for a new global community and innovative approaches to migration. Such policies cannot be crafted in isolation. Europeans need partners for a global dialogue.

We are human rights advocates who want refugees to be able to come to Europe as a matter of right and not by the grace of God.

Nevertheless, Pope Francis’ views matter because we need to renew the conversation in civil society about who we are, how we want to live together in Europe and who belongs here.

We also need to play our part in transforming the international system with the goal of saving human lives - workable policies to free parts of the world from persecution and violence.

We do not need to start erecting taller and more impenetrable walls. Without bolder action, the world will lurch from one ‘crisis’ situation to another.

It is to be welcomed that in her State of the Union address, Ursula von der Leyen promised an EU led reform of the World Health Organisation and the World Trade Organisation.

But a global dialogue will be hampered without the participation of the USA, a nation which has withdrawn from UNESCO and the WHO, and paralysed the work of the WTO.

Joe Biden, himself a Catholic, would give a new impetus to global efforts to take a fairer, more co-ordinated approach to the challenges we face, including that of migration. It is to be hoped that moderate Catholics will have the good sense to support him in this election.

Donald Trump claims to be religious and not a racist. You don’t need to be a person of faith to recognise that the reverse is the case.

Populist leaders in Europe and America who claim religious affiliations are cynically polarising communities for political gain. Moderate Catholics can and should call them out.

This article is supported by the pilot programme Stars4Media. It has been updated on 2 November.