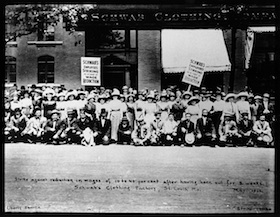 It’s not real if it’s not online

Mass social movements only make waves when they have the internet in tow. This distorts our understanding of the world says Angela Nagle.

From the Arab Spring to the Occupy movement, revolutionary events and radical politics have certainly made headlines in the last year. Last week however, one of the largest strikes in human history took place and it barely registered as a newsworthy event in European media. With most of India’s major unions and thousands of smaller ones on board, the 24-hour general strike drew out an estimated 100 million-strong workforce, bringing banks, businesses and public transport in many parts of the country to a halt.

Back in the heady days of 2011, BBC journalist Paul Mason’s claim that “it’s all kicking off everywhere” (written in a blog — where else? — and now worked into a book published by radical press Verso) seemed to capture something of the spirit of a moment of popular revolt, where commentators who support the recent apparent radical turn have been keen to draw links between diverse movements happening around the world, from struggles against authoritarian regimes to those resisting austerity in Greece and Spain. But while opining over the Occupy movement continued unabated, both the press and bloggers remained relatively quiet about the Indian strike, with minimal coverage, such as the BBC’s report, which described it mainly in terms of inconvenience to commuters.

One explanation that leaps out is that Western audiences may just prefer to read about Western issues. This doesn’t quite explain things, though. The Arab Spring was, rightly, afforded significant coverage in the West, so much so that it defined the tone of the protests in Spain and later at Occupy Wall Street. It has been the subject of countless opinion pieces, blogs, essays — and no doubt spawned more academic papers than will ever be read. It's not surprising that we Europeans tend to view the world through a Europeanised prism, but it is interesting that the Indian strike failed to pique our interest given the country's role in the global economy. Perhaps the strikers reminded us of our European selves after all — just ourselves four decades ago.

The key ingredient that the heavily reported and blogged movements like the Arab Spring, Wikileaks, Anonymous and Occupy had that the Indian strike didn’t was the internet. It appears that if Western commentators can’t frame extra-parliament politics in terms of the internet, if struggles don’t come with a live stream and a form of organisation that sits comfortably with our contemporary internet-centric network sensibility, it will simply be ignored.

While commentators celebrating this new internet-centric radicalism have praised it for moving beyond cold war politics, the narrative being imposed, one of the internet as a technology of liberation, is not as removed from power or the cold war as its advocates would like to think. When US Secretary of State Hilary Clinton came out in support of the Arab Spring in her now famous internet freedom speech, she was continuing a tradition that began during the Cold War of casting the civilian internet, a byproduct of military spending, as a means by which to bring American democracy and the free market to the world.

If this really is a pattern that shapes our understanding of the world — and it is one that has already penetrated academia and is in danger of further shaping foreign policy, as experts like Evgeney Morozov have warned — the implications are troubling. The promise and optimism of the cyber utopian wave of the moment is so intoxicating that commentators seem afraid to step-up and play the role of kill-joy. In this strange distortion of global politics, Congolese coltan miners are not 2.0 enough to be part of our global village, while strikes such as last week's in India are just a bit too twentieth century to be part of our ongoing celebration of “the power of organising without organisations” as Clay Shirky put it.

Internet boosters are quick to point to the deficiencies of the so-called "mainstream media" but whatever its problems, the internet has played a role in futher diminishing serious, commited coverage of foreign news. With news organisations cutting back on foreign reporters and adapting as best they can to the conditions of the internet and online audiences who never commit, this cyber utopian frame is likely to be self-perpetuating.

The Indian strikers had clear demands. They were calling for a national minimum wage, social security benefits and permanent jobs for 50 million contract labourers. If the labour movement in countries like India continue to grow and organise they will bring about huge shifts not just at home, but also in the global economy.

Jean Baudrillard famously claimed that the 1991 Gulf War did not take place. This absurd claim was much debated at the time, with critics accusing Baudrillard of denying reality and supporters saying he was accusing the war of existing primarily as a mediated, television conflict. Regardless of one's views on that war, the hashtag revolution seems to confirm that if something doesn't happen on the internet we don't care about it the real world.

For the time being, it may well be “kicking off everywhere,” but if it doesn’t come with a hashtag attached you’re unlikely to hear much about it.