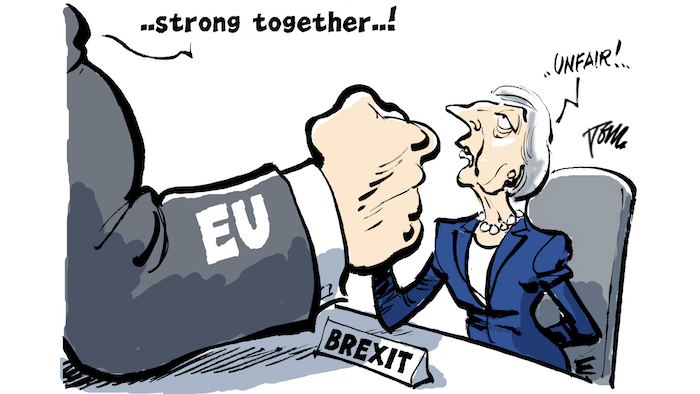 ‘It’s the EU who will lead the dance’

After meeting the EU officials who lead the negotiations on Brexit, British prime minister Theresa May has become brutally aware that, contrary to what she's been saying for months, it's not the UK that has the advantage: Europeans are united and Brexit will not be an easy ride.

The meeting, arranged by May, showed to the EU the huge flaws in the British government's handling of the Brexit issue, as the quotes leaked to the Frankfurter Allgemeine Sonntagszeitung reveal. Originally published by Alternatives économiques and translated from the French by Ciaran Lawless

“Its been a long time since we've seen such cohesion and unanimity at the heart of the EU”, affirms El Periódico, in its editorial after the April 29th summit for adopting EU27 guidelines on Brexit. For the Catalan daily,

faced with the major challenge of one of its members leaving, the EU is capable of putting its differences aside and remaining united. The document approved by the EU27 does not hide the uncertainty and potential disruption that Brexit has for Britons and the Union. It stresses as a result the necessity of maintaining this cohesion in order to come to an equitable solution for all parties. Certainly, the potential disruption is enormous. The British government sees this rare unity as a challenge to their country. London, with a long and dense history of actions based on the principle of “divide and conquer”, will try again, given that it's future is at stake. And the subjects and countries with which they could cause divisions are numerous: with Poland, for example, a country with a huge number of citizens living in the UK; and Spain, because of the still delicate question of Gibraltar; or with Ireland, for the future of Ulster; or with the Netherlands, which needs to negotiate a trade deal with London or Germany for its exports to the UK. But the biggest problem will be the cost. The separation will have a high cost for the British, but also for the other member states, since, as Jean-Claude Juncker has argued; some don't want to be paying more to cover the budgetary deficit left by the UK, and others don't want to be receiving less. Soon we'll see if the current unity is just temporary and if a new European divide will appear alongside the one between north and south, east and west, and debtors and creditors. In these uncertain times, and without having emerged fully from the crisis, the EU cannot afford division because it opens the way to disintegration. In the current times, the Union is the only defence against multiple threats against a Europe that often seems to have forgotten the terrible lessons of the past.

Anna Słojewska argues in Rzeczpospolitathat “Theresa May was kidding herself if she thought that the EU would be gentle in its negotiations on Brexit.” In effect, “the member states of the EU don't have any interest in accepting an agreement that would be advantageous for Britain, because that would be an admission that an exit from the EU could be profitable, and other eurosceptic nations may be encouraged. Besides that,

the Dutch and the Danes cannot allow a situation in which the UK pays nothing, because in that case it would be up to them to cover the shortfall. The guarantee of rights to three million European citizens resident in the UK, and the payment of 60 billion euros for Brexit doesn't represent an unrealistic cost for remaining in the good books of the world's largest trading bloc. Nevertheless, the more Theresa May focuses on electoral concerns and thinks only of her own interests, the more she will be unable to recognise the truth. It would seem that she has been backed into a corner by eurosceptic tabloids.

“It's a shame that the UK has decided to separate from its 27 European partners. It should nevertheless be clear that it's those who remain who set the rules of the separation, not those are leaving”, writes Marco Zatterin. In an editorial, the La Stampa's correspondent in Brussels writes that –

painfully, and not without regrets, democratically elected European governments have made a road-map for the separation which allows for some flexibility. In reality, they do not know all that well what to do, but they make their best effort while respecting the rules, because changing them would cause the whole building to crumble. The British prime minister, Theresa May, says that the course outlined by the EU 27 doesn't suit her. She wants to leave the EU without losing the advantages of the twelve-star club, most of all the common market. It's right that the the European leaders deal helpfully with her, because it's in both sides' interest. But it would be an error, in doing so, to transgress rules and shared values. That would weaken them all the more. The choice of those who want to leave is legitimate, as is the choice of those who remain. It's the latter who will lead the dance. London, after having brought this situation, should accept the will of the other states; for the sake of the British, but also for the Europeans who – at present – would do better to stay determined and more aggressive. In the interest of all.

“For months Brussels has repeated: in the negotiations on Brexit, Europeans are united behind proper procedure and guidelines. The inevitable damage that Brexit will cause should be reduced to as little as possible, thanks to tightly controlled negotiations”, argues NRC Handelsblad's Melle Garschagen, adding that –

But what will happen if the other side refuses to cooperate? If the British don't want to respect the rules? It's a scenario that Brussels doesn't want to contemplate. But a series of declarations by Theresa May and her minister for Brexit David Davis are headed in that direction. (…) And what happens if they follow through?” The negotiator for the EU on Brexit, Michel Barnier, “has stated very clearly something that is unacceptable for London: it's the EU that will dictate the process. The British realise that if they follow the rules, they will be marginalised. Thus, May is forced to claim that 'some in Brussels do not want the negotiations to succeed', referring to the European Commission. In fact, if May feels in Autumn that a defensible agreement is not possible, she will put an end to negotiations. Britain will leave, won't pay a thing, and bet on the idea that Britain is so important to the EU that it will use the time it has left until March 2019 to negotiate a trade deal.

At their meeting with Theresa May, the Europeans “have poisoned the atmosphere and rendered the coming discussions all the more difficult. The 'disastrous dinner' could have some disagreeable consequences”, notes Eric Bonse. In his analysis, Die Tageszeitung's Brussels correspondent notes that –

the real error has been committed by the European heads of state and governments. They know full well that there is still an enormous distance between their road-map and the plans of Theresa May. Jean-Claude Juncker warned Angela Merkel before the reunion of a potential clash. Despite that, Merkel and other leaders have done nothing to calm the situation. They have not approached May in a conciliating manner, but on the contrary have tried to put her back against the wall. Instead of proposing a plan B in case of failure, they've remained silent. They have clearly been more concerned with giving the impression of unity. But that too, is just an illusion. When, finally, the discussions turn to fundamental concerns – money and institutions currently based in the UK – the wake-up call could be very painful indeed.