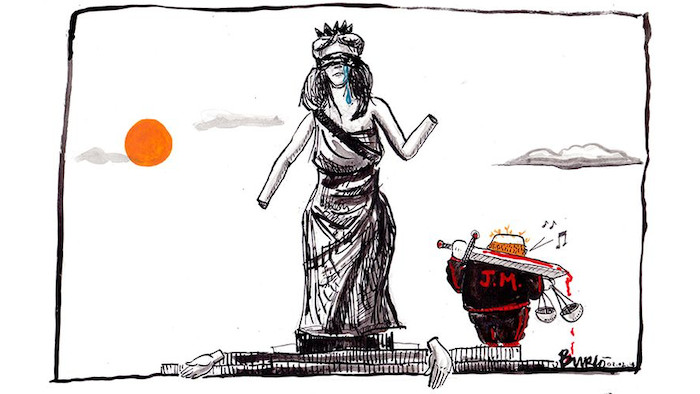 Justice is coming for Daphne

More than two years after the murder of anti-corruption journalist Daphne Caruana Galizia, public pressure and the tireless work of her colleagues to continue her investigations are beginning to bear fruit. The alleged instigator, his links with the authorities, and the corruption that plagues the archipelago have come to light, plunging Malta into an unprecedented political crisis.

“Justice for Daphne!” That cry reverberated through Valletta every 16th of the month to mark the day Daphne Caruana Galizia was assassinated in 2017.

But Lady Justice appeared to be taking her time. The early breakthrough of the arrest of the three men charged with having planted the bomb was not followed by any visible progress. Where were the masterminds? Were they being protected? These were among the burning questions being asked by the protesters who gathered religiously every month. Things appeared to be stuck.

They came unstuck two weeks ago with the arrest of the alleged middleman in the assassination and the rest is history – still unfolding in a rapid succession of spectacular events related to both crime and politics.

Justice appears to be back on track. There are both heroes and villains in this incredible story. The heroes are those in different fields of endeavour who, despite the obstacles and obfuscation, pressed on with the criminal investigation, pursued Daphne’s probing to fruition and persisted in holding their demonstrations, all with searchlights scanning for truth, despite the government’s insistence to clean up the evidence of their protests.

The villains in the piece – let’s call them alleged – are starting to emerge. After the bombers, we found out about the suspected middleman, taxi driver Melvin Theuma, and potential mastermind, the mogul Yorgen Fenech.

Luckily for the truth seekers, there is no honour among thieves and they are ready to squeal. On the now blurred borderlands between crime and politics, Economy Minister Chris Cardona has suspended himself after being questioned by the police, the Prime Minister’s chief of staff, Keith Schembri, has finally stepped down after facing enormous internal pressure and his own police interrogation, and Konrad Mizzi has followed suit.

More should and will face justice. The country is in turmoil partly created by the Prime Minister and the men close to him. The murder investigation would not have precipitated a political crisis of this magnitude had he shown Mr Schembri and Dr Mizzi the door when their rotten financial dealings first came under Daphne’s own searchlight. His wilful blindness has helped the rot to spread, making it ‘normal’ for thousands to turn a blind eye to corruption so long as they got a piece of the cake. Most of that corruption was institutionalised – it has been surreal for us to report the hundreds of jobs given to the boys, the direct contracts, and so on.

Now we have a country where wealth is the highest value whichever way it’s earned, excessive construction has ruined the country for good and the rich are raking it in at the expense of the poor – because that’s what corruption does.

Yesterday, the Prime Minister was asked whether he would step down given that Mr Schembri, the man behind his throne, is now under the shadow of suspicion. Dismissively, prime minister Joseph Muscat spoke of moving forward, the need to make decisions, take responsibility and provide stable leadership. Given his past inaction, his closeness to Mr Schembri, the suspicion by association that falls upon him and his contribution to the current political mess, the Prime Minister needs to reconsider.

He needs to ask himself whether progress, political responsibility, stable leadership and wise decision-making – in the interests of achieving justice and resolving the country’s crisis – would be better served if he stepped aside, perhaps after an adequate transition period.

This cannot last for several months though. Malta needs to revert back to a semblance of normality where social justice and the common good reign over greed, corruption and cronyism.