Report Immigration
Lampedusa, October 5: Fishermen throw a wreath in memory of the immigrants who died in the sea in the early hours of that morning 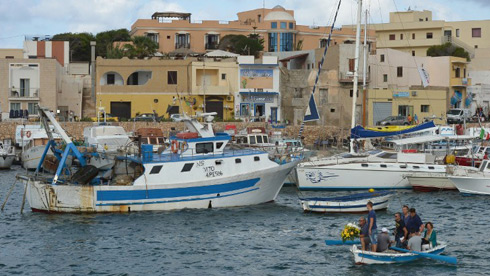 Reporter Fabrizio Gatti, who passed himself off as an Arab migrant, explains why he believes the island – symbol of the EU's migration policy – deserves to be rewarded for the way it welcomes the thousands of migrants who land on its shores.

Lampedusa, October 5: Fishermen throw a wreath in memory of the immigrants who died in the sea in the early hours of that morning

Ten years ago, in 2003, on autumn days like these, I went “undercover” for my journey into the world of human trafficking. From Africa to Europe, through Senegal, Mali, Niger, Libya, Algeria, Tunisia, and finally the island of Lampedusa. Looking at photographs taken from helicopters of bodies floating face-down in the Mediterranean, blown up like pillows, arms open in embraces that got no responses, I had decided to go under the name “Bilal”. The pictures were from a shipwreck, one of many, this one off Kerkennah, the mythical island of Tunisia: 41 survivors, 12 bodies recovered, 197 missing. Ten years have passed since then and for thousands of other people, life ended in that petrified pose: face-down in water, body swollen, arms flung open.

In these Mediterranean waters, the website Fortress Europe has recorded 6,825 deaths since 1994, including 2,352 in 2011 alone. Taking into account the entire length of the border of Europe, from the Canary Islands to Turkey, the death toll has been 19,142 since 1988.

The most absurd aspect is that all these people are dead because of two pieces of cardboard and a handful of pages in the middle: a passport. It was while travelling across the Sahara packed into trucks or being detained as “Bilal” in the detention camps for so-called illegal migrants that I began to grasp what an extraordinary and diabolical instrument a passport can be. If you have a good one, you pass through borders and you belong among the world of the survivors. If you have a bad one, you have to put yourself in the hands of traffickers, and you belong to the world of shipwrecks. But can we let young people, women, children and their fathers die for two small pieces of cardboard and a handful of pages?

[[The EU has spent hundreds of millions of euros over the years on protecting its borders, though the Frontex Agency and its police]]. The member states found it easy to reach agreement on this point; but when it comes to implementing the conventions on refugees, the often neglected duty to help at sea, and the rules on immigration, nothing or nearly nothing has been spent. Each state does what it sees fit.

And so the total absence of a joint project for the tens of thousands of exiles from Syria, Eritrea, Somalia and other countries and the failure to open up humanitarian corridors across a territory that extends from detention camps in Libya to refugee camps in Turkey have, paradoxically, transformed criminal gangs into the sole international agency of smugglers that can offer a way out. The consequence is the mass deaths.

None of this prevented the EU from receiving the Nobel Peace Prize a year ago. That is why, faced once with images of bodies floating in the sea, I felt the need to break the silence and to propose on the website of L'Espresso, the weekly that I work for, a petition to have the 2014 Nobel Peace Prize awarded to the thousands of survivors and castaways who, by fleeing, sought to avoid wars.

Since the Nobel Prize cannot be awarded to those who have disappeared at sea, I propose that it be given – on behalf of the dead and the survivors – to the small town of Lampedusa and its inhabitants, who have not stopped bringing the bodies to shore. [[Lampedusa is not the Italian state which, by an absurd law, is entitled to prosecute the 155 survivors, for the crime of illegal immigration]]. Lampedusa is not even Europe, as it’s much closer to Africa than it is to the continent of Europe. Lampedusa is the first place, real and symbolic, between us, the spectators, and these men, women and children who cling to its cliffs to ask us for help. Lampedusa and its 6,000 inhabitants have never, over the tragic decade, lost their powers of reason and that common humanity that does not distinguish between citizens and illegal migrants.

This common sense I experienced for myself. In the night of September 23-24, 2005, pursuing my investigation, I jumped into the water, pretending to be an illegal migrant. After many long hours in the water a man that I did not know and who did not know me saw me in the waves. He helped me get to shore and lay me out on a rock. He took off his T-shirt and covered my chest with it. I was still shaking. Then he lay down on me. Without even knowing who I was, he brought the warmth back to my body. He was heavy, too. I was dirty, unshaven. I could have been sick or infected with a contagious disease.

At the end of my investigation and after my book came out, I saw him again. Massimo Costanza is not a professional rescuer. He is electrician and has a wife and children. An ordinary person.

The Nobel Peace Prize has its reason for being. If it had never been awarded to Aung San Suu Kyi, very few people would ever have heard of the dictatorship in Burma. This is why this petition must be signed, to break the wall of silence and let the world know what is happening on the southern front of the European Union.