Ideas Poland and WW2 — a reaction
Soldiers from the Polish resistance in Warsaw's neighborood of Woja during the city's uprising, in 1944. 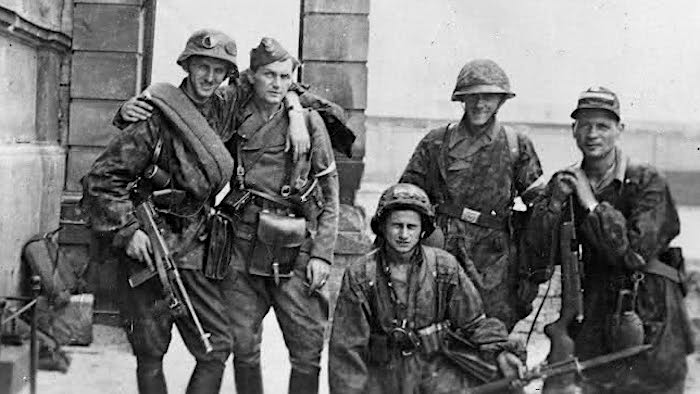 Ideas Poland and WW2 — a reaction

‘Let us not confuse patriots with nationalists!’

Lorenzo Ferrari's article on the Gdańsk World War II museum provoked an intense debate in Poland. In response to this, radio journalist RMF FM Bogdan Zalewski wrote us an extensive letter. Although highly controversial, his point of view is nevertheless shared by a significant part of the public opinion and the current Polish administration. We are publishing it here as we received it and as it was published on RMF FM’s website. Its contents are the sole responsibility of its author.

Soldiers from the Polish resistance in Warsaw's neighborood of Woja during the city's uprising, in 1944.

Dear Sir, Madam,
Very often when reading texts about Poland, I am under the impression that they are still in a foreign language, even after they have been translated. And it was no different when I read the article by Italian historian Lorenzo Ferrari Torn between the nation and Europe.

The introduction itself conjured the stern schoolmaster out of me like the genie out of Aladdin's lamp. “The World War Two Museum in Gdansk has become a battlefield between nationalistic and liberal views of Poland's national identity,” so the author begins his article about the meanders of political history on the Vistula. Immediately after reading this very first sentence - as a teacher of both Polish and Political Sciences - I placed a large red question mark next to the word ''nationalistic''.

I am really puzzled by the success of this word, although I can see how the pieces fit together. Why is the PiS (The Law and Justice party) government and its Minister of Culture, Professor Piotr Gliński, frequently described as ''nationalistic''? This not a purely descriptive term in the liberal terminology dominating in the West. ''Nationalism'' has a pejorative sense here, that is, to put it mildly, a label. It is a question of pushing Poles who are attached to their national history and tradition into a political ghetto. It is important to make a distinction between the two meanings of ''national'': of culture and of politics. In Polish political language, the word ''national'' is different from ''nationalistic'', and the PiS is not even a ''national'' party!

In our political tradition, the term is reserved for the period of National Democracy (ND) or ''Endecja''. However, even the pre-war ''Endecja'' under Roman Dmowski cannot be compared with German National Socialism (Nazism) on account of its lack of totalitarian and criminal elements. It is a total misconception! The PiS is in fact an emanation of Polish patriotism headed by Jozef Pilsudski, an adversary of the National Democracy.

One of the three reviewers who were asked by the Minister of Culture, Professor Piotr Glinski, to evaluate the concept behind the Gdansk institution was PiS senator and historian Professor Jan Zaryn, a scholar of unquestionable authority. His [report]((http://wpolityce.pl/historia/334526-tylko-u-nas-prof-jan-zaryn-odwiedzil-muzeum-ii-wojny-swiatowej-co-zobaczyl-czy-placowka-wymaga-zmian)report was available not only to the ministry but also to every reader of the weekly newspaper w Sieci' and the website wpolitice.pl. A quick online search for this article is all that is needed to read the critiques against the people who conceptualised this museum. The other two critics were Dr. Piotr Niwinski, a historian specialising in the Second World War, and conservative columnist and author Piotr Semka. These accusations were no ''nationalistic'' fabrication!

In a brief letter such as this there is no space for detailed analysis. Let me focus then on the idea so praised by Lorenzo Ferrari — “focusing on the everyday experience of the people affected by the war, not only of soldiers.” Piotr Semka reproached the curators for unduly emphasizing the realities of ''everyday life''. He fairly asked: Why should the military history only be in the background?

Isn't it undervaluing the role of the Polish military resistance to Nazi Germany and Soviet Russia's aggression? My country was the first to resist by force of arms the simultaneous attack of the two criminal totalitarian states; was left at the mercy of fate by its Western allies, and then created the Polish Underground State - one of the largest resistance organisations at the time. The number of participants in the Polish resistance was around 600,000 people! Polish soldiers shed blood on battlefields across the world. According to historians, we had the fourth largest allied army among the allies in Europe. Isn't it fair to ask about the effects of ignoring this fact in the name of ''civil'' doctrine? Isn't it distorting the picture of WWII? In the name of what? Originality?

Lorenzo Ferrari approvingly observes that the Gdansk ''museum is supposed to emphasize the connections and similarities between experiences of Poles and other Europeans''. Am I not allowed to be doubtful about this liberal ideology of the common destinies of Poles and other nations? I shall bluntly ask: Are Jews the only group of victims who liberals ''allow'' to be uniquely afflicted by the ordeals of the war? Is the cited Professor Timothy Snyder not contributing to the narrative of absolute uniqueness of the Holocaust, which has become popular in the politically correct liberal discourse?

There have been other examples of equally horrible genocides in the history of mankind (Armenians by the Turks, Ukrainians during the Great Hunger). In the controversy with the opponents to the idea of the Gdansk museum, Timothy Snyder used a calque which is often used by some scholars in the West who often express openly their hostile attitude towards Poland: ''The idea of the Polish innocence, which the current government is going to establish, is far from innocence itself. Because, if Poles were the only victims of Hitler's aggression, how can we explain those war episodes in which they were collaborators and perpetrators?” Consequently, can we still accept that all the Jew’s are innocent, despite several examples of collaboration and betrayal on the part of some Jews, both against their own people and other fellow citizens?

Their anti-Polish collaboration with Soviet Russia after the Soviet invasion, and the Jewish police in the ghettos are documented facts. Such reprehensible behaviour from Jewish and Gentile Poles would not have been possible without the war initiated by Berlin and Moscow, would they? Wartime is not normal time! And history is said to be a science, not ideology. Let us remain logical, rational and let us not use traditional assumptions stemming from our likes and dislikes, or an academic lobby affiliation. There is no doubt: the few Poles who did collaborate (punished by death in the courts of the Polish Underground State) would not have helped Germans by denouncing and killing Jews if Germany had not invaded Poland, and had not organised the Holocaust there. And if we had not been stabbed in the back by the Soviets in 1939. It is logical, after all.

Before WWII, Poland was not, unlike other leading countries in Europe, a totalitarian and criminal state, although it tended to be authoritarian. In the Second Republic of Poland, the genocide of Jews would never have happened as it did in Nazi Germany, the Holodomor ''starvation'' of millions of Ukrainians would never have happened either, as it did in Stalin's Soviet Union. And yet it is us, Poles, who must pay penance for our exaggerated, or even fictitious failings. Let us recall what foreign historians and journalists will not: Poles, unlike the French or the Norwegians, did not form a government collaborating with Nazi Germany.

The Polish wartime experience is unique! However, it is obvious that it is different from the Jewish gehenna. The wartime suffering of Germans is also different from ours. In spite of all the pain and bloodshed the Germans were not the victims of WWII, but the perpetrators! Everything stems from the democratic election of Adolf Hitler and massive support for his criminal politics. You cannot seek community here. There is no common denominator with collaborationist France. Poland was not to bear the burden of doing service in the national SS units. That is why we are astonished at the French, Dutch, Belgian, Danish, Ukrainian citizens who did. We do not feel kinship with the Lithuanian shaulis - who perpetrated massacres against Jews - or the Hungarian Arrow Cross Party. Nothing connects us with the Italian fascists of Mussolini or the Japanese imperialists.

We, Polish patriots, not nationalists, simply do not recognize forging history, equalising guilt and martyrdom in the name of post-history. As simple conservatives, we do not recognize postmodern games. We aim at the Truth, with a capital T.

One of VoxEurop's primary vocations is to be a platform on which Europeans, those who shape public opinion, and especially those who constitute it can debate issues that concern them and which concern their future in a constructive and democratic way.

Keeping this in mind, we have decided to publish this letter addressed to us by Bogdan Zalewski, written as a response to Lorenzo Ferrari’s article criticising the attitude of Polish authorities towards how their country’s experience during the Second World War, although this does not reflect our point of view.

Indeed, if Bogdan Zalewski’s letter has the merit of recalling the exceptional character of Poland’s history, constantly caught between two warlike empires, we can not endorse his argument on the behavior of Jews during the Second World War, as his claims call into question the uniqueness of the Holocaust.

However, as we reminded in the header, this article reflects an opinion or vision of history which is shared by a significant part of public opinion, and characterises the current powers in place in Poland. We have chosen to publish it because it allows us to more accurately pinpoint this relatively unknown aspect.