Ideas A call from civil society 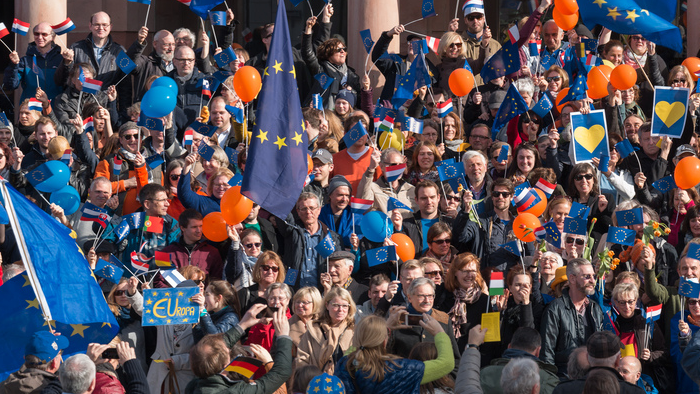 Ideas A call from civil society

Let’s invent a better Europe together!

The recent election of pro-European Emmanuel Macron as President of France comes at a time when citizens are standing up for Europe and its values – and sometimes to show their dissatisfaction –  in demonstrations and on the ballot sheet. The time has come to transform this embryonic movement in a true deep reform of the EU, say several prominent European figures.

Martin Kraft |  A Pulse of Europe meeting in Wiesbaden (Germany), in March 2017.

In the aftermath of the Hungarian, Austrian and Dutch elections, the appointment of Emmanuel Macron – a potentially pro-European President of the French Republic – creates a historic opportunity to reimagine the European project. That is why we decided to create a Europe-wide civic debate to involve our fellow citizens in writing a new chapter in the history of the European Union.

A year ago, we paved the way for a new ‘European Renaissance’. We called on our fellow citizens, leaders and opinion makers across generations and on all sides of the aisle and of all member states of the Union to mobilise at every level against the temptations of nationalism and populism and to promote a new European civic spirit. We also invited them to reinvent the European Union, focussing on placing its citizens back at the heart of the project. The moment of this transformation has come. It is time to make the European Union a political, democratic, industrial, cultural, ecological and social power, capable of defending the interests and values ​​of our fellow citizens. A power that is once more at the centre of globalisation instead of being a passive observer.

In a certain way, our appeal was heard. The shock of the negative result of the British referendum, the new international reality with the election of Donald Trump and the Russian stiffening, accelerated the need for a common European front. How else could we face the concrete challenges that go beyond our national borders and give new vitality to our democracies? Throughout the Union, from Portugal to Poland, from Germany to Romania via France, Italy and the Baltic countries, citizens have come out onto the streets to show their support for the Union. New movements such as Pulse of Europe, Stand up for Europe and Civico Europa saw the light.

Eurobarometers and opinion polls have – over the last nine months – shown an unprecedented return to the European project, aided by the financial crisis, the conviction that the Union should strengthen its capacity for action in the field of security, the fight against terrorism, the management of migration and the regulation of globalisation in commercial, financial, environmental and social matters. Heads of state and governments joined us in their deliberation of the future. On the occasion of the 60th anniversary of the Treaty of Rome, the Union sketched a roadmap that we are calling for. Some of our social proposals such as the pillar of social, security or democracy rights such as transnational lists are now being discussed within the Council of Ministers.

Moreover, national leaders and citizens are more open about their support for Europe. Rather than opposing European pride and ambition, they understand and assert that they are mutually reinforcing. The failure of the anti-European referendum in Hungary, the victories of the pro-Europeans in Austria and the Netherlands and now the triumph of Emmanuel Macron in France – who has placed the European project at the heart of his campaign – places us in a new and favourable historical context.

Today, we are committed to our responsibilities and take collective action. We are aware that there are forces that aim to fragment our societies: it is urgent to strengthen our growth, to fight vigorously against inequalities and to formulate rights and freedoms in order to give everyone robust prospects for the future in an inclusive society. Otherwise the cohesion of our countries and of the Union is under threat. It is important for everyone to take his responsibilities without delay, the member states, the Union, but also citizens and opinion leaders. This is what we are trying to do today, with the limited means we have by engaging ourselves and taking the initiative.

“What is the European way forward for a better future?”, How can we concretely involve our fellow citizens with the search for constructive solutions? These are the challenges of the great citizens-debate that we are launching on the 9th of May, Europe Day in Brussels, Capital of the Union, with Jean-Claude Juncker, the President of the European Commission. We have put concrete proposals on the table of European leaders – as requested by the Presidents of the Commission and the European Council – which takes into account the concerns of its citizens related to Seven pillars: democracy, education and culture, the social dimension, sustainable development, the economy and industry, currency and of course security, defence and foreign policy.

But we want to go further. It is pressing to give new life to our representative democracies by fostering the emergence of genuine deliberative and participatory European democracy.

We therefore propose to organise a new European participatory process in the autumn, aiming to involve citizens on an ongoing basis in defining the priorities and future political projects of the Union, which will give rise to civic conventions throughout the EU. With the responsibility of citizens. May all those who are convinced that our future must invent together will join us and support us! Signed by the members of Civico Europa, initiative takers for the call for a new European Renaissance on the 9th of May 2016: