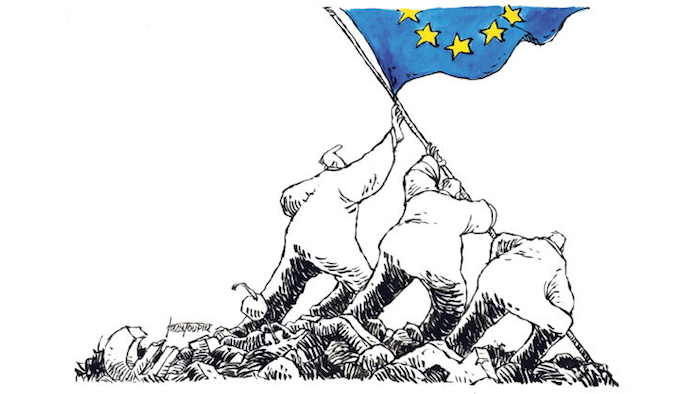 Ahead of the 60th anniversary of the Treaty of Rome, the Union faces complex challenges that call for a common vision of its leaders. The signatories of the Roadmap of the 9 May Movement call Europeans to join them in a ‘March for Europe’ in Rome.

On 25 March 2017, the Heads of State and government of 27 EU Member States will gather in Rome to celebrate the 60th Anniversary of the European Union.

We wish to write a new chapter of European history and look forward to contributing to the debate on the future of Europe as launched by Jean-Claude Juncker, President of the European Commission. This broad debate needs to include Member States, parliaments, representatives of civil society and citizens.

The Union stands at historical crossroads. Either Europe proceeds along the path of decay and decomposition à la Brexit, or we get our act together and truly act together. Neither complacency nor standstill are an option. If Europe wants to be able to meet the challenges of today and tomorrow, we must vehemently reinvigorate and reinvent our Union.

The challenges are not new. However, in today’s insecure times of rapid change, they are more global and complex than ever before. If we don’t want lose our social ties, if we choose not to return to times of prejudice and populism, if we want to keep an open society, we have no other choice but to address these challenges urgently and adequately. Otherwise, we will witness, hands tied, the end of a model based on cooperation and multilateralism, which has allowed the spread of democratic societies.

Digitalisation, cybercrime, terrorist threats, global warming, scientific and industrial revolutions… are all trends that bypass borders. We have evolved towards a multipolar world where Europe is losing its relative weight in terms of demography, economy, politics and culture. Globalisation has reduced poverty worldwide and boosted economies in emerging countries. In our Western world, however, it has weakened the middle classes and many people feel left out. This feeling fuels populist and nationalist sentiments, on the rise in large parts of the globe.

A Europe that protects citizens

Europe remains nevertheless a beacon of peace, prosperity, equality and civil rights. It offers great opportunities to its 500 million inhabitants and remains a lighthouse of civilisation to humankind. The European project has delivered, with our economic and monetary policy, the Internal Market, the largest in the world, our unique set of values and rights as set out in our Charter of Fundamental Rights, and with our top-notch research and science programmes such as the European Centre for Nuclear Research, which have contributed an Europe of Excellence.

Nevertheless, this dynamic has been losing steam and we must respond to European citizens’ demands. We need to re-situate Europe and make sure that Europe and its member states mutually reinforce their role. The existing Treaties provide ample room to enhance the allocation and coordination of the EU’s resources in the short term. In times of growing insecurity, Europe must, first of all, protect our citizens and our values.

This requires a common agenda and shared ambitions. It requires a common vision by our leaders, who should commit themselves to the Union as only way forward into the 21st century. The Treaties foresee that Member States can advance with enhanced cooperation in specific areas. It is time to put this provision into practice, especially with regard to Eurozone governance as well as rolling out an European Defence Strategy, urged by the new American administration.

We call for a more powerful Union, on a political, economic, democratic, social and cultural level. We call for a Union that increases its impact on an evolving international stage and works towards a new global equilibrium based on peace, solidarity and cooperation, fundamental in order to face current transnational challenges. We invite each and every European who supports a relaunch of the European project, to join us in the ‘March for Europe’ on 25 March in Rome.

We hope that this ‘March’ will mark the start of a democratic and civic Renaissance, through which citizens can finally take part in the definition of the challenges and priorities of the European Union. This should go hand in hand with a broad reflection on what we have in common as Europeans, the values and interests we share as well as how to safeguard what we cherish, together, in the interest of our continent. We urge everyone who stands behind the future of our Union to join us in this initiative towards a truly European civic coalition. We share the same values, have the same interests and we are all children of the same civilisation. What we need now is a common European conscience.

Guy Verhofstadt (president of the Alliance of the Liberal and Democrats for Europe), Daniel Cohn-Bendit (former president of the Green group at the European parliament), Alain Juppé (former PM, mayor of Bordeaux), Robert Menasse (writer), Roberto Saviano (writer), Cédric Villani (mathematician), Wim Wenders (film director) and Guillaume Klossa (founder and former president of the think tank EuropaNova). The complete list of signatories can be found on the website of the 9 May Movement

The present call has been published by several European media, like Le Monde and EurActiv.