Ideas A reader’s op-ed on the European elections
Ok, maybe not those ones… 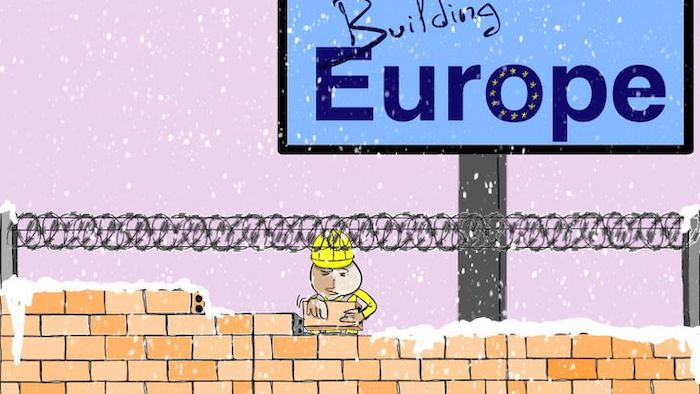 Ideas A reader’s op-ed on the European elections

Let’s vote for those who want to build Europe!

The European elections of May 2019 are crucial to shape our action over the next 5 years. So let us vote, all of us! Let us choose builders who offer a constructive, far-reaching plan.

Perdipol | Cartoon Movement  | Ok, maybe not those ones…

Those who wish to unravel Europe paradoxically have too much confidence in the established world order. In the current context, multi-polar and unstable, nothing guarantees the foundations we relied upon throughout the last century. For example: the USA might neither remain unavoidable, nor our allies. This became painfully more apparent since Donald Trump was appointed president.

When Trump declares, "I would rather deal just with France. The European Union is very tough for us" (and suggests France should leave the EU) it is a simple explanation and a striking proof that we need the EU. If I campaigned for the next European elections, I would use this quote extensively -- as a pro-European punchline.

When China attempts separate negotiations with each EU member nation so as to extend its "New Silk Roads", it is the same old principle: divide and conquer.

Only the European level can deter the behemoths of the 21st century, whether these are states (China, USA, Russia) or of private nature (Facebook, Google, Amazon...). For example, the GDPR demonstrates that Europe can indeed have an impact and can shape its own future. In comparison, a single nation would have been laughed at if it had tried alone to impose a change of this magnitude.

Such geopolitical aspects are essential, and reach beyond over-simplified accounting of each nation's contributions to the European budget -- one of the most radical examples of which is the now infamous bus advertising campaign during the Brexit referendum.

Europe can offer us a sufficiently imposing and durable protection. Is there any serious alternative? Certainly not go it alone. At best it's a flash in the pan. At worst, a monumental tragicomedy like Brexit. In the end: being tossed between much greater powers that are without empathy and unpredictable — if not hostile.

Enabling action at European level is therefore necessary. But not sufficient to succeed — or maybe even impossible — according to some of its critics. Indeed, assuming Europe is operational, which actions should be undertaken? This is a political matter.

While it is a fair point that allowing actions at European level alone is not sufficient to ensure that the adequate actions are in fact identified, this is by no means a solid argument for unraveling Europe. Quite the contrary: it is a matter of self-organizing better so that people's Europe emerges, and politics can finally happen in this realm — be it right-wing, center or left-wing.

Why would politics be impossible at this level? Indeed, politics in a European democracy are bound to be difficult. But so are politics at the national level! We should finally step off the brakes to really see what we can do together, with a European democracy. There is every reason to believe that much can be done, in all key areas, ranging from the economy to the environment and scientific research, from social issues to military defence and managing migrations.

Although repeatedly announced as "historical", EU summits are no longer extraordinary. They are required in the everyday reality we must now deal with, while chaos is increasing on our planet.

The European elections of May 2019 are crucial to shape our action over the next 5 years. So let us vote, all of us! Let us choose builders who offer a constructive, far-reaching plan. And let us bypass mirages — which include backward-looking unravellers, or the illusion of a status quo.