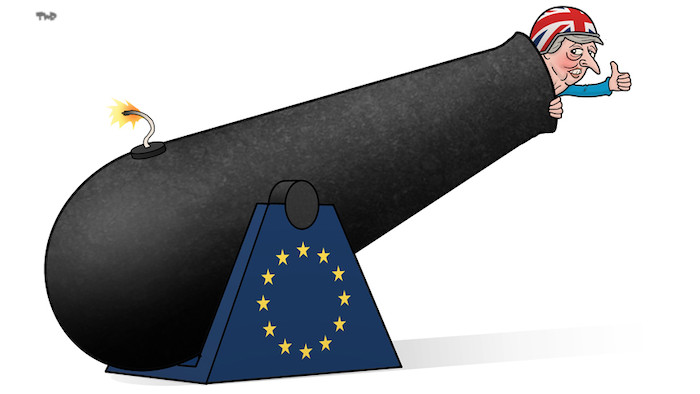 Liberal democracy is everything but a fundamentalist belief

Safeguarding the faith in liberal democracy does not necessary mean giving in to the unfettered power of the majority. Political scientist Karel B. Müller sums up some arguments which seem to be underrepresented in the current debate on Brexit.

An anonymous Remain-voting Labour MP whose constituency voted Leave by a large margin confessed in The Times (The Secret Diary of an MP, “Sadly, We Must Leave. Faith in Democracy is at Stake”, 27 March) that she (or he) will make the choice to vote to leave the EU and to vote against a second referendum if these options are to be tabled again in the House of Commons. S/he stated that “although we are not delegates, as a democratically elected MP I don´t believe that morally I have the right to overturn that decision.” While I do believe that such conviction resonates with the opinion of many, it is actually at fundamental odds with the principles of modern democracy. I would like to stress four of them.

Firstly, we live in a representative democracy, but such a stance presumes a false conception of democratic representation. Considering the complexity of our societies, political systems should provide responsible leadership based on informed decisions made in light of long-term impacts. For the citizens themselves, it is often very difficult to assess these impacts. If the blind lead the blind, they all fall into a ditch, and Brexit has so far been a striking example of such a crisis of representative leadership.

Secondly, we live in a liberal democracy, which is primarily concerned with unconstrained power, including the power of the majority. I believe it was wrong to submit such a contested issue to the hands of the public, an issue that could endanger the rights and indeed the very livelihoods of so many Europeans. The ramifications of this referendum, indeed, encompass the destruction of lives and the tearing apart of families, and it is up to the elected representatives to provide a safeguard to check and balance on this illiberal, though democratic, outcome.

Thirdly, even if we accept that the identity claim [to exit the EU] needs to be recognised, it is impossible for a well oriented person, which MPs ought to be, to accept that complying with such a symbolic claim is going to foster social stability and economic prosperity. On the contrary, we are confronted with an abundance of evidence that succumbing to symbolic (identity) demands exacerbates social and political division. Historically, identity politics has never been associated with long-term prosperity and the rule of law.

Finally, it seems rather fatuous to suggest that the UK must leave the EU in order to save the public’s faith in democracy. As Karl Popper concluded, among many others, what makes democracies successful is their capacity to learn from mistakes. To suggest that submitting the same [or a similar] contested question to a referendum puts democracy at risk is to treat the public as a kind of invincible deity, and to deprive it of the very right to public learning. Such an extreme demand disregards the resurrecting and self-learning capacity of a liberal society. Liberal democracy is everything but a fundamentalist belief that principles must be upheld at all costs.