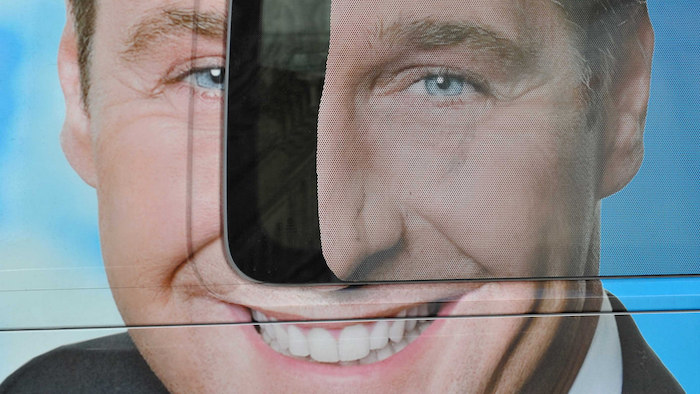 Liberal parties are drifting ever more to the right

In Austria, the Freedom Party has turned from the most pro-European movement to the most europhobe and anti-immigration. In Germany the Liberal democrat party has put its hostility to migrants and refugees on top of its agenda. The same goes for Switzeland's once-centrist DUC. What has happened to the Liberal ideology in German-speaking Europe?

On the 9th of February 2014, 50.3 percent of Swiss voters declared themselves “against mass immigration”. While authorities may have watered down the decision on immigration quotas, all the political forces except one were opposed to the proposals. This one exception, however, was the Democratic Union of The Centre, who came first in legislative elections in 2015, taking 65 of 200 seats, with 29.4 percent of the vote. This show of power may foreshadow an even bigger victory sooner rather than later.
Why would a centrist party want to impose restrictions on the number of refugees, and therefore put themselves in opposition to the right to asylum? Well, the party was indeed centrist in the 1970s. But since the 80s the party’s leaders have veered increasingly to the right in their insistence on Switzerland’s independence. The only kind of liberalism that the UDC can honestly lay claim to is economic liberalism.
This happened at a time when Austria’s Freedom Party was also changing its stripes. Nationalist discourse seemed to have some wind in its sails in germanophone countries. While in 1980 the European wing took took the reins of the FPÖ, in 1986 it was the charismatic Jörg Haider, bitter opponent of European integration, who took control. This was a shock coming from the party which was first, in the 1950s, to propose the idea of joining the EEC, bringing Austria out of its isolation, caught as it was between two sides of the cold war.
Will Germany’s liberal democratic party (FDP) be next for a right-wing makeover? It certainly possible. Since the beginning of the electoral campaign, the party has declared a change of direction: welcoming refugees is not our priority. No question, then, of repeating the mistakes of 2012, when the party paid the price for a program that was judged indistinguishable from that of their coalition partners, Merkel’s CDU. The new leaders of the FDP refused to conclude coalition talks with the Greens, judging their election programs irreconcilable on questions such as global warming and immigration. On the latter topic, the liberal democrats showed themselves to be particularly uncompromising. More and more commentators claim that the FDP is no longer on the left of the CDU and has moved to the right. This arouses fears of a political agreement in the future with the far-right AfD.

December 18th 2017. Sebastian Kurz announces the formation of a new Austrian government. The 31 year-old chancellor doesn’t seem phased by the fact that the ministers for the interior, defence, and foreign affairs all come from the FPÖ. Indeed, it’s been what feels like eternity since his nominally conservative ÖVP has been almost exactly aligned with the far right on questions concerning immigration: “the quota policy for refugees that the EU wanted to impose two years ago made no sense. At the time of speaking, the limits between the right to asylum and economic migration are already blurry enough.” The new host of Vienna’s Budeskanzleramt, for his part, spoke the rhetoric of the far-right, according to which it’s better to help immigrants in their own countries, not on the Old Continent. If that’s not possible, they should be received in neighbouring, stable countries, and not on the other side of the Mediterranean.
The FDP’s shift to the right could have a similar effect on German politics. Despite all its benefits, democracy has a tendency to turn electoral campaigns into a free-for-all where the highest bidder has all the advantages: the electorate rejects the dispassionate and turns ever more frequently to those who offer simple solutions. Angela Merkel, whose position is already weakened, will therefore be even less intransigent when it comes to the question of refugees. And if she ends up resigning, her successor at the head of the conservatives will not hesitate to blame all the ills of Germany on immigrants. Faced with the tough stances of the AfD and FDP, the only other political force on the right cannot maintain its humanist discourse without risking accusations of leftism.

The decidedly right-wing stances of the “liberals” mentioned above does not mean that these countries are entirely deprived of genuinely liberal and centrist parties. In Switzerland, parties with evocative names like the Green Liberals, the Liberal Democrats or even the Christian Social Party, opposed the proposals against “mass immigration”. They may not share the same views, but they share an open and humanistic outlook. In Austria, the NEOS (New Austria and Liberal Forum) made a significant entrance to parliament in 2013. One would be forgiven for thinking it a flash in the pan, but they improved on their result in 2017, going from 6th to 4th position.
If the FDP’s transformation into a party less open towards immigration is consolidated in the years to come, other political powers will no doubt start to make an impact in Germany. But it is still too early to say what will happen. The president of the FDP, Christian Lindner, is not Jörg Haider – he wields much less power within his party, and his ideas about immigrants are not modelled on those of Haider. It may well happen, then, that the FDP returns to the fold of traditionally liberal political parties. Meanwhile, it is paradoxically the CDU that plays the role of the truly liberal party – on economic matters, but also on social matters, as demonstrated by Angela Merkel’s tacit agreement with marriage equality, and her policy of openness towards migrants.

You can unsubscribe anytime *
Categories
Politics and democracyGermanyAustriaAustriaGermanySwitzerlandSwitzerland