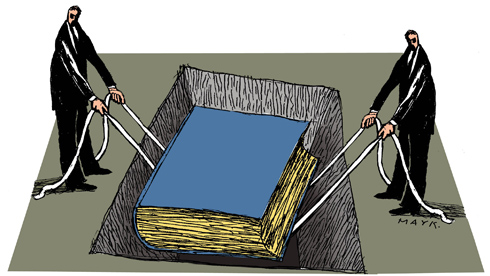 Local literature on its last legs

We have freedom of movement, freedom of information and freedom of speech, but we are prisoners of a disdain for our language and culture, which is feeding illiteracy, complains a Romanian historian and writer.

You do not need to be a communist to see that illiteracy — a problem that was largely eradicated in the 1950s — is on the increase in our country, where it now affects 6 per cent of the population, and 40 per cent of teens in the under-15 age group who lack basic reading and writing skills.

You do not have to be affiliated to a political party to notice that in their neglect and denigration of Romanian national culture, Romanian governments of all political hues have been gloriously assisted by the large post-communist publishing houses, whose eagerness to earn money from translations is, in most cases, matched by their disdain for living Romanian culture. And those who are unconvinced of this fact need look no further than the percentage of editorial production in this country which is actually devoted to Romanian books.

No substitute for literary culture

It is high time that someone once again took a stand to say that "translations do not make a literary culture," and that they cannot and should not be substituted for freely undertaken original production in the language of this country and in the name of an ethos, which is ours alone. It is once again time — even if it is tiresome to repeat history — for a Mihail Kogălniceanu [the 19th Century liberal politician, prime minister and cultural figure] to speak out against writing that comes to us from Potomac, St Petersburg or Tokyo, which, no matter how exciting and interesting it may be, and regardless of the universal values it may transmit, can never express our joy and suffering like simple tales from such breeding grounds for creative ideas as the Obor Market, the Bega Canal, or the Apuseni mountains.

Writing from Potomac, St Petersbourg and Tokyo can only assume its full significance with regard to our cultural horizons, when, despite all the odds, it incites, provokes, suggests and calls for a dialogue with life as we live it. We cannot blame people for wanting to accumulate as much wealth as they can obtain in their short lives. At the same time, we will continue to delight in the works of such great untranslatable — and some would say pointless — writers as Ion Ghica, Ion Creangă and Mihail Sadoveanu... But why should the desire for gain be viewed as more legitimate? I do not believe that the goal of progress is served by the eradication of our national culture and of the language in which we publish.

We are living in a period of great creativity, marked by the expression of truly valuable voices. In many ways, it is an era that has come about as a result of more than 20 years of free movement, freedom of information and freedom of speech in Romania, which has benefited from stimulating contact with the West and the rest of the world. The exhilaration of a deep breath of ocean air has brought us a new freedom in writing, painting and musical composition, even if we have remained economically inept.

But let’s not delude ourselves: illiteracy is on the increase while the quality of teaching has fallen. The problems of our main minority — the Roma — are far from resolved. Even schooling has remained an issue. And now the population of Romania is in decline.

Surely the time has come to take action to raise the dignity and the culture of our people to a level in tune with the aspirations of the past. Can anyone imagine that without education, and without an identity, we can be partners in a European community at the leading edge of technology? How can we ask our Magyar population to speak Romanian correctly, when we ourselves are unwilling to attribute any cultural credit to our language?

This eternal travesty, this servile mimicry of the hegemonic language of the moment cannot be a solution because it strips us of all credibility. As long as we continue to discredit free cultural initiative and for as long as education remains a secondary priority, we will produce only idle citizens — a non-qualified labour force that can be put to work cheaply by the multinationals of this planet, which will have no real role in history. Is that the destiny of Romanians today? To be outsiders in our own country...