Lukashenko, our own merciless dictator

While Europe's eyes are on Middle East revolutions, a dictator in the east quietly crushes his opposition. But voices are beginning to make themselves heard. 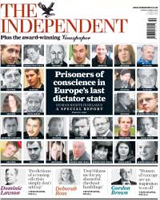 The KGB headquarters in the centre of Minsk is known to locals as "Amerikanka". No one is really sure how the sprawling complex got its name, but everyone in Belarus knows it is not a place you want to end up.

With its Corinthian columns and bright yellow walls, the building looks harmless from the outside. But it is in fact a cage for Europe's last prisoners of conscience and the epicentre of a brutal crackdown carried out by the continent's last dictator.

As the Middle East burns with popular anger over the region's lack of democratic progress it is easy to forget that one corner of Europe still steadfastly refuses to abandon its dictatorial past.

Alexander Lukashenko, the president of Belarus, has ruled his country with an iron fist ever since the republic achieved independence from the Soviet Union in 1991. But over the past two months his security forces have gone after his opponents with a ferocity that would not have looked out of place in Soviet times.

Virtually all the presidential candidates who dared to stand against Mr Lukashenko in last December's flawed electionshave been imprisoned or placed under house arrest.Multiple allegations of torture have been made, while candidates have been pressured to denounce each other in video statements. Read full article in The Independent...

“Seedy cell with dirty loo on the left and huge wooden pallet in front of me. No mattresses or pillows. Dirty yellow walls and terrible stink. In the morning you wake up shivering with cold”, that is how Andrzej Poczobut, Gazeta Wyborcza’s correspondent and activist for the Polish minority in Belarus describes conditions in the notorious Akrescina prison in Minsk where all Belarusian opposition are jailed. Life behind the bars is dull: “reveille at 6.00, then sweeping the cell, at 8.00 breakfast consisting of buckwheat and something which only resembles tea served in aluminum hand-burning mugs from Khrushchev times; lunch at 16.00, supper at 19.00, two hours later inspection and another day has passed...Only from time to time something unexpected happens. “The last one out gets a kick in the ass...”, I hear in the corridor. A bored-to-death guard has just decided to make an extraordinary inspection of the cell”, recalls Poczobut who was eventually released on 25 February after 14 days spent in prison. He insists that he wasn’t tortured by “sad men from the KGB” only because Polish president Bronisław Komorowski and head of European Parliament intervened on his behalf. This time he was lucky.