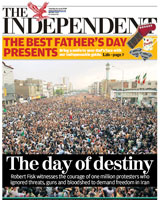 The Independentis one of the leading quality newspapers in the British press, albeit the one with the smallest circulation. Launched in 1986 at the height of the Thatcher years, its initial aim was to cleave an "independent" path between papers affiilated to the Conservative and Labour parties. Its pro-European stance sets it apart from its rivals. Big-name staffers include special correspondent Robert Fisk, known for his vehement condemnation of Anglo-American policy in the Middle East. In 2010, after years of declining sales, it was bought by the Russian businessman Alexander Lebedev for the nominal fee of £1.