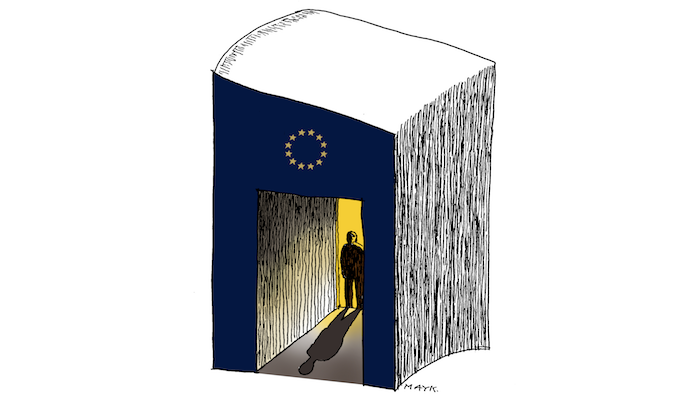 Demanding towards aspiring member countries, ineffective against Member States: European institutions have problems with fundamental rights. But things are changing at the European parliament.

“The Union is founded on the values of respect for human dignity, freedom, democracy, equality, the rule of law and respect for human rights, including the rights of persons belonging to minorities. These values are common to the Member States in a society in which pluralism, non-discrimination, tolerance, justice, solidarity and equality between women and men prevail.”

It is laid down in Article 2 of the Treaty on European Union (TEU) and because of the importance given to fundamental rights in the Union, on the 25th October 2016, the European parliament approved recommendations to the Commission on the establishment of an EU mechanism on democracy, the state of law and fundamental rights, the so called “DSD Pact”.

The long process towards the adoption of the proposal has as precedent the recommendation formulated by the Parliament toward some member states, starting with the 2013 resolution adopted for Hungary in reaction to the constitutional reforms and the changes in the legislation on the media adopted by prime minister Viktor Orbán.

With a more systematic approach, the parliamentary commission for civil freedom, justice and internal affairs (LIBE) turned to the European commission with the 10th June 2015 resolution inviting it to present “a legislative proposal for the establishment of an EU mechanism on democracy, rule of law and fundamental rights as instrumental for the respect and application of the Charter and the treaties signed by all member states based on common indicators and objectives.”

The resolution voted by the parliament at the end of October now calls for the creation of a committee composed of experts (the DSD Committee). They are charged with drawing up an annual report on democracy, rule of law and fundamental rights in the member States, and then adding recommendations specific for each member state on issues considered of particular importance, such as the separation of powers, freedom and pluralism of the media, equality towards the law, the fight against corruption and the conflict of interest.

The mechanism ensures strict cooperation between European institutions in a spirit of cooperation and subsidiarity: once the evaluation framework by the DSD Committee is made public, there will be debate in the European parliament adopting a subsequent resolution, and also in the EU Council. Should the evaluation reveal a particularly critical situation, the Commission could decide to initiate a systemic breach procedure, in accordance with Art. 7 of the TEU.

The Parliament also advocated the revision of Art.7 of the TEU in order to improve the effectiveness of sanctions against those member states responsible for systematic violation of fundamental rights including financial penalties or suspension of EU funding.

What is the situation up to now?

The EU does not have a mechanism which guarantees effective protection for fundamental rights within the member States. The only procedure against a country which does not respect these fundamental rights is the one mentioned in Art.7 of the TEU. It says that upon a reasoned proposal from a third of the member States, of the European parliament or the European commission, the Council can see that an obvious risk of a serious violation by a member state of the known values set out in Art.2 of the Treaty exists. In this case, before taking action the Council hears the member state in question and could provide recommendations. Should the recommendations not be followed and the country concerned has not taken any counter measures, the Council could decide to suspend some of the rights granted to member States by the Treaty, as the right to vote in the Council itself.

This procedure has however never been applied.

A point which also the reform proposal from the LIBE Committee mentioned was the difference between treatment given to future member countries and that given to those already part of the EU. “The lack of compliance to the rules by a candidate country has the effect of slowing accession to the EU, while the lack of compliance to the same rules in a member s`State or EU institution has hardly any practical consequences,” adding that “the institutions and bodies of the EU as well as the member States should give an example by fulfilling their obligations and trying to form a shared culture for the rule of law as a universal value in the 28 memberSstates and in the EU institutions.

The case of Poland

Among the reasons behind the proposal for reform shown in the document drawn up by the LIBE Committee are “recent developments in some member States” which “have shown how lack of respect for the rule of law and fundamental rights are not adequately faced”.

It therefore emerges that there are many situations in Europe where the protection of human rights and fundamental freedoms are cause for worry: a clear example is the situation in Poland.

In Poland there is a series of threats to the rule of law. It began when the government led by the populist Law and Justice party (PiS) refused to recognise the decisions of the Constitutional Court which was elected by the Parliament in the previous legislation.

PiS also proposed a controversial constitutional reform, still to be approved, which according to some analysts would restrict the actions of the Court itself, unsettling the fundamental principle of the separation of powers.

The EU tried to open a dialogue with the Polish government. On the 27th July last the European parliament approved a resolution in which it invited the country to resolve its constitutional crisis within three months, that is by the 27th October. Poland replied on the last days available by rejecting the recommendations of the European parliament as “no legal possibility can be found to put them into effect”. The document also states that the recommendations of the Parliament “are based on the unfounded claim for the prominent role of the Constitutional Court in upholding the rule of law”.

This case demonstrates that the EU as it is organized at the moment cannot get the same results when treating democracy or fundamental rights as when treating economic or fiscal matters. In fact too frequently attempts to point out to the member states their own commitments is met with a certain reticence or refusal to recognize the laws established by mutual agreement.

The introduction of the DSD Committee dedicated to monitoring democracy, human rights and fundamental freedom will help, as will the introduction of an annual debate in the European parliament. This will not only shed light on the general condition of the EU, but, as mentioned by Sophie in’t Veld, will also allow the creation of a culture of democracy, the rule of law and the fundamental rights between the member states in the EU.

It is now up to the European commission to draw up a draft before September 2017 for the creation of a “Pact on democracy, the rule of law and fundamental human rights”. It will then need to again pass before Parliament and, more importantly, to go before the European Council where the member States will have to give their agreement. It is then hoped that at least within 2018 this initiative can begin to be implemented.