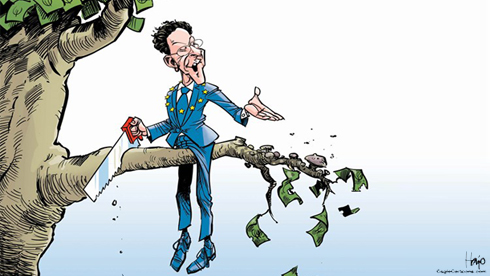 The Eurogroup president is coming in for increasing criticism. After a few political gaffes, the Dutchman stands accused of listening too closely to his team of cocky Finance Ministry officials.

As early as 7.30 pm on May 13, the story broke that the 17 Euro finance ministers had finished their meeting. "The Eurogroup at last has an efficient manager," was the response of one Euro-country diplomat. That he likes to keep a tight rein when leading meetings is one of the few compliments the Dutch Minister Jeroen Dijsselbloem has received since he took over as President of the Eurogroup in January.

Enquiries among high-ranking European and national government officials and other parties involved has produced one long litany of complaints.

One issue that irritates several of the parties involved is that Dutch government officials from the Ministry of Finance are slowly taking over the coordination of the Eurogroup. As a result, the collective viewpoint has much more of a Dutch bias than used to be the case.

In contrast to his predecessor, Jean-Claude Juncker, Dijsselbloem has assigned a large number of government officials to the Eurogroup who appear to be confirming the age-old cliché that Dutch people “talk too much and like telling others how to do things.”

Dijsselbloem's appointment was orchestrated by the Germans. When Juncker announced his departure last year, the German Finance Minister Wolfgang Schäuble wanted to be his successor. However, almost everyone was against the idea because a dominant Germany would then be lord and master of the Eurozone.

When Dijsselbloem succeeded [Jan Kees] de Jager in November and The Netherlands seemed to be adopting a more moderate stance, Schäuble started to regard him as a loyal alternative. Many voiced their misgivings. Others asked, "Is this is a position which a minister can do ‘on the side’”, particularly someone new to the job? Schäuble, however, did not want a permanent full-time president. His argument was that, before you know it, yet another European institution would have been created. Schäuble wanted the presidency to go to "a European capital" because the people there at least know what is going on in the world.

However, as numerous sources confirm, Schäuble changed his mind. According to well-informed sources, Chancellor Angela Merkel had also accepted the idea that the Eurogroup should have a permanent president. There were a couple of reasons for this.

First of all Dijsselbloem refused, in February, to exclude the possibility of account holders having to help pay for the losses of Cypriot banks. This resulted in a flood of capital out of Cyprus. Then, there was the famous long night of Cyprus talks in March. So many participants threatened to use their veto that avoiding those vetoes became a goal in itself.

The result was a reprehensible decision: people who had bank savings of less than €100,000, who were covered by the European Deposit Guarantee Scheme, were to lose money. There are many who doubt whether this would have happened when Juncker was at the helm. “However, Dijsselbloem, who primarily listens to the advice given to him by his staff from The Hague, failed to take action,” according to a European civil servant.

Another problem facing Dijsselbloem is that Brussels appears to be in the grip of a kind of Juncker nostalgia. Juncker, who was the only other person to fulfil the role of Eurogroup president (since 2005), is a rather peculiar brand of European federalist – namely, one with authority. People seem to have forgotten his muddled appearance and drink problem.

Later Berlin was irritated by Dijsselbloem's comments in the Financial Times at the end of March, that account holders should, in the future, pay more to help save the banks. European countries are still negotiating the issue. Not every country supports the idea. Proponents do not agree about the timing, or about the question of whether shareholders, bond holders or account holders should make the first sacrifices.

European bank shares dropped in value after Dijsselbloem's comments. According to a European civil servant, this will not cost Dijsselbloem his head. "However, if the credit status of any European bank is lowered, he will have to go.”

One too many hats

The question is whether appointing another minister to the post of president would avoid any of these problems. That is why no-one is advocating the appointment of another minister to the post of part-time president but instead someone who is available on a full-time basis who is not committed to a national administration and who could therefore serve the common interest. "The best thing that the Eurogroup can do,” claims Peter Ludlow, the well-established European Council historian, "is appoint a permanent, experienced, neutral president. A part-timer trying to wear two different hats does not work.”

Everyone agrees that the Eurogroup is not an easy group to control. The group is made up not only of 17 ministers, but also three troika members: the ECB, the European Commission and the IMF. Meetings are sometimes so difficult that groups split off to try to reach agreement first before trying to convince the rest. Sometimes decisions are pre-agreed by the “triple A” countries. On other occasions it is the “Frankfurt Club”, which is made up of a number of large Euro countries, together with the ECB and IMF. Nothing seems to be structured and sometimes the big boys trample the little ones underfoot.

‘A vestige of the last century’

"The Eurogroup is a vestige of the last century. It symbolises everything that is wrong with the architecture of Europe,” claims Guntram Wolff from the Bruegel think-tank. However, taking away the right to veto of countries in the Eurogroup, should governments want to go down that path, would require an amendment to the Treaty on European Union.

Such an amendment could take years. One alternative might be to draw up a separate treaty for the Eurozone, involving just the Euro countries. That too would take quite a long time. Until then the Eurogroup will have to make do. This means everything is down to the weight and tact of the president. That is, perhaps, too much to ask a minister.