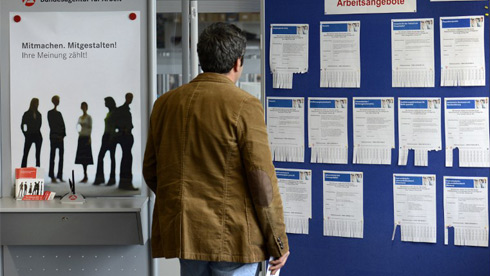 No common front in the fight against joblessness

The latest figures are grim: unemployment has soared to record levels in the eurozone, with 11.8 per cent of the workforce unemployed. So far, however, European countries have been unable to harmonise their social policies in an effort to get out of the crisis.

Four years after the crisis began, Europe is still struggling with a depressed labour market. To return to the levels of 2008, 2.7m jobs would have to be created in the eurozone, and 2.8m at the European Union level. In the Union overall, the number of unemployed has risen by 8m over four years and the unemployment rate has shot up from 7.1 per cent to 11.8 per cent.

Not all countries have been affected in the same way. In countries hard hit by the financial crisis or trapped in excessive public debt, the fall in employment has been dizzying: Ireland and Spain have lost one job in six since 2008, Greece one in seven, and Portugal one in 10. Outside the eurozone, the Baltic countries and Bulgaria have also paid a heavy price. Poland, Belgium, Germany, Austria and Sweden, on the other hand, have fared considerably better and are now slightly above their 2008 levels. Falling between the two groups, France is just above its pre-crisis level, according to Eurostat data.

How do you explain such differences? Employment policy, and not merely the intensity of the recession in 2009, has made the difference. Far from harmonising their responses to the crisis, European countries have in effect bet on different strategies, with greater or lesser success.

In some countries, the adjustment of the job market to the financial shock was swift and uncompromising. Faced with a slump in orders, companies quickly slashed their workforces to preserve their margins. This is what happened in the United Kingdom, where the labour market is highly flexible. In Spain and Denmark, employment fell more sharply than the demand for companies’ products, which resulted in significant productivity gains and a surge in unemployment. It was often those employed in temporary jobs (fixed-term or temporary contracts) who served as an “adjustment variable”: their contracts were not renewed. Those countries that have created the most flexible labour markets are the ones that have seen the sharpest spikes in unemployment rates.

In other countries, however, the adjustment of the job market was marked by half-measures. Faced with falling demand, companies preferred to reduce wages and the number of hours worked rather than dismiss employees outright. This is the strategy used most widely in Germany, Belgium and Italy, due to an intensive deployment of short-time workers. To a lesser extent, this is also what happened in France. Faced with a downturn, the pain was shared out among all the employees of the same company, rather than primarily on those to be laid off.

Other types of policies have been brought in. Austria, for example, chose in early 2011 to subsidise semi-skilled and unskilled jobs. It is indeed the low-skilled workers who are usually the first to be dismissed. Hungary, Slovakia, the United Kingdom, Finland, Sweden, France and Spain have also supported the demand for jobs, to encourage the hiring of young, elderly or low-skilled workers, but in a more timid manner and with more mixed results. In contrast, recourse to jobs largely funded by the public has been limited. The number of those fell by 15 per cent between 2007 and 2009 in the European Union.

Finally, the tool most widely used has been professional development, or job training. Apart from this relative consensus around the need for training, however, the crisis has not been exploited to harmonise social policies in Europe. Some states stick to the laissez-faire approach, while others go in for massive intervention. In 2010, spending on employment policies in effect ranged from 0.7 per cent of gross domestic product (GDP) in the United Kingdom to 2.3 in Germany, 2.5 in France, 3.4 in Denmark, 3.8 in Belgium and 3.9 in Spain.

In such a context, the idea put forward by France and being studied by the Commission to set up an unemployment insurance system at the European level is quite a puzzle – because when it comes to unemployment benefits, it’s a free-for-all. Rules differ from country to country, and so do the levels of the benefits paid out.

Even if a European system of unemployment insurance set out not to replace the national systems but rather to take the form of a basic benefit supplemented by each country, the harmonisation needed in terms of coverage and eligibility would be no simple matter – especially since, hampered by severe budgetary constraints, most states have recently overhauled their unemployment insurance systems in a way that has left the unemployed worse off.

In 2010, Denmark cut the period unemployment benefits can be paid from four to three years. France did the same in 2002, reducing it from three years to two. In Spain, the benefit was cut by 10 per cent from the seventh month of unemployment. In Portugal, the maximum compensation has been reduced, its total sum is declining, and the period it will be paid has been reduced as well. Only Belgium, swimming against the tide, has raised the amount of the allowance and facilitated youth access to unemployment insurance.

European countries, in short, are orienting themselves towards the lowest common social denominator. The unemployment compensation systems, however, have an economic interest, not just a social one. Without this buffer the crisis would have done even more damage. Even the OECD has finally recognised that. To unravel the safety net while Europe is not yet out of the woods risks bogging the continent down a little deeper in the economic slump.