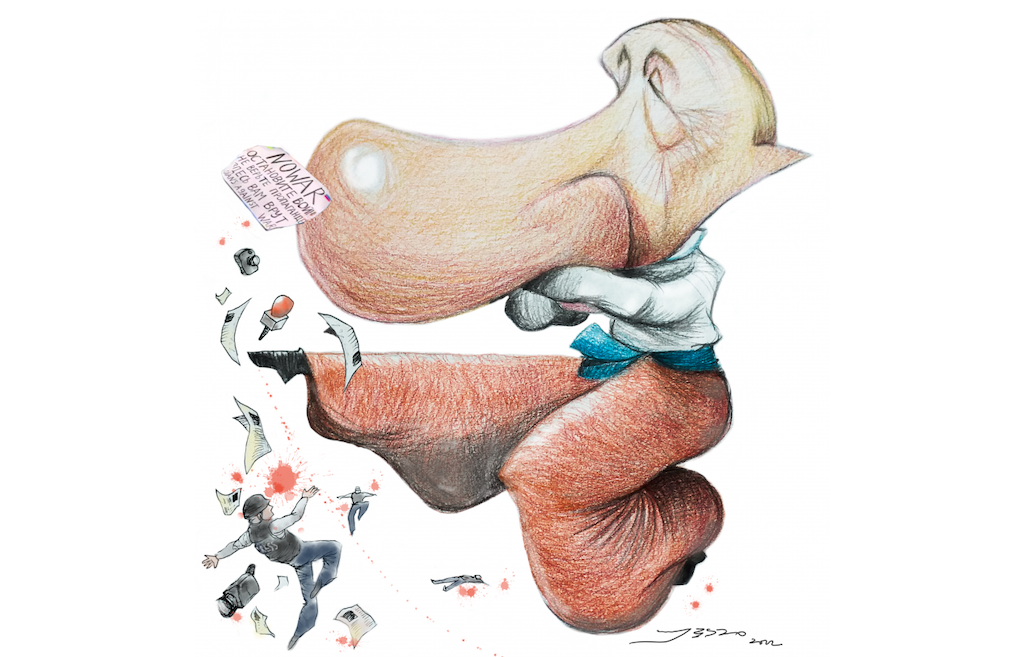 This is the speech Nobel peace prize co-laureate Dmitry Muratov gave at the 2022 Difference Day, on 2 May in Brussels. The editor-in-chief of opposition newspaper Novaya Gazeta was declared Doctor honoris causa delivered by the VUB/ULB in Brussels on the occasion of the World Press Freedom Day. Translation and transcription are courtesy of Difference Day.

How it turned out that for the first time in the history of mankind, itself and life on the planet depends on the wish and will of one man? The president of Russia, who has a red nuclear button in his jacket pocket or in a suitcase or next to his desk. How did we arrive at a broken future with an endless stream of refugees and already 12 million people? And to the equally endless exhumations of the bodies of Ukrainian civilians? The answer now seems quite certain.

The answer to this very complex and tragic question is the destruction of independent media, the repression against political opponents. And most importantly, total propaganda. I am a witness of how a whole nation, our nation in the 21st century, became the object of a successful experiment of being irradiated by propaganda. In the absence of free media, propaganda always starts preparing for war. Propaganda is the kitchen of war, Propaganda is war itself. First comes the militarisation of national holidays, then the news is replaced by propaganda shows.

More : The war in Ukraine and Vladimir Putin’s imperial project

Then, the thesis emerges that the truth is what is needed and serves the interests of the state. If you love your Motherland, you love the government. The church joins this choir, asserting at every turn that all power is from God. One of the pinnacles of these techniques, these manipulations, is the constant reports of newer and newer types of weapons that terrify the whole world.

Thus the people are taught to get accustomed to war, they are told about the greatness, bypassing the stage of well-being.

And now the peak is getting gradually used to the fact that nuclear weapons are, in general, not so bad. You can sometimes think about using them. I'm afraid we've already got plenty of willing talk shows where the winner gets to press the red button. Propaganda has brought Russia and Ukraine into a state of enmity for decades. Russia and a huge part of the world. It's a tragedy, but there is an even bigger tragedy.

This war began to be recorded by electronic devices. This war is taking place in a digital format, which means it will never be forgotten. It means that until the end of times search engines for the letter "M" will deliver photographs of Mariupol erased from the face of the earth. What to do? What to do when you feel powerless? Help those who are worse off – refugees, the elderly, children. On 15 May there will be an auction where Novaya Gazeta and I will put up the gold medal of the 2021 Nobel Peace Prize. The proceeds of the sale will go to the refugees and their children. In whichever countries of the world they will be. In this we ask for the assistance of UNICEF. People have been robbed of their future and we need to help them get it back. It's too late to help with the past.

Anyone, by the way, can participate in this auction. It is held by the auction house Heritage, and it will be possible to auction objects dear to your family and personal items as lots. We also need to remember that if there is no free media there is no future either. Therefore, Press Freedom Day is no longer a professional holiday, it is not a corporate day, it is the day of all mankind. If it wants to survive, of course.