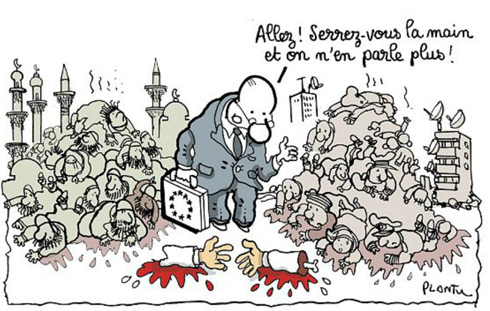 Come on. Shake hands and we’ll put it behind us.

The EU’s Special Representative for the Southern Mediterranean, Bernardino Leon, arrived in Cairo on July 31, to continue the bloc’s efforts to work “with all sides [of the political spectrum] on a way forward” out of the political deadlock between the military’s interim government and backers of former president Mohammed Morsi.

His mission follows a visit by the Union’s High Representative for Foreign Affairs Catherine Ashton, in which she met government leaders, the military, the Muslim Brotherhood and Morsi himself.

According to Agence France-Presse, more than 300 people have been killed since the beginning of the current crisis, which started in late June, shortly before the army ousted Morsi from power on July 3.