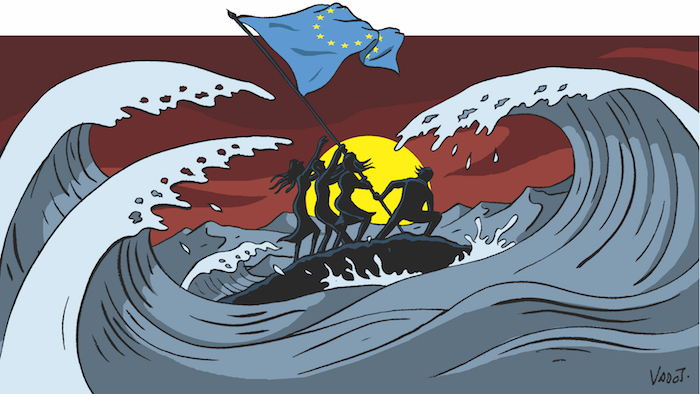 Our manifesto for a European journalism

An online media outlet created by journalists from the four corners of Europe, VoxEurop is born of one conviction: it is no longer possible to address the challenges of the present era at the level of the individual nation.

Whether the challenge is climate change, migration, health crisis, deepening inequality, or the erosion of democratic principles and press freedom, cooperation is essential. Journalism, a pillar of democracy, needs to keep pace with these changes, and enable all Europeans to be informed actors in their shared destiny.

European citizens already know this. They are organising, and moving their local actions and initiatives to the transnational, European context which underpins them. We want to give these citizens a voice, and foster discussion of the big questions Europeans face on a daily basis. The involvement of civil society expresses a commitment to the fundamental principles of solidarity, tolerance, inclusivity and fraternity: the crucible of a united Europe. We want to work alongside civil society to build bridges between citizens, and help the emergence of a genuinely public and civic European space. No European democracy can exist without the robust articulation of European public opinion.

A journalism for all Europeans

Marked by the history of our parents and grandparents, and immersed in multiple European languages and cultures, one project brings us together: participating in the construction of this common future, inspired by the desire for peace upon which the strength and originality of the European project is founded - forged as it was from the catastrophe of the two world wars. If this desire still keeps the European Union together, it has at least been shaken: by the rewriting of history, the rise of populism, the far-right, and xenophobia.

More than ever, in an age of social media, fake news and echo chambers, it is vital that citizens have access to a media which is independent, reliable, and capable of decoding the larger, shared challenges. Now, more than ever, in order to confront the return of extremism and nationalist withdrawal, the dissemination of debates, ideas, information and knowledge is essential.

While the majority of traditional media outlets, for economic reasons, are reducing the presence of correspondents in various European countries, VoxEurop wants to foster this essential, quality European news service. As that prescient genius Umberto Eco said: the language of Europe is translation. By translating articles into ten languages – or more – and providing a multilingual forum, we want to allow every European to be informed and participate in debates in their language of choice.

We also firmly believe that news is a public good; for this reason, we’re relying on solidarity: the support of our readers will ensure that our site can remain independent and paywall-free. Operating as a European press cooperative since September 2017 (the first of its kind), VoxEurop gathers a community of expert members and journalists, specialist translators and media partners, correspondents and columnists, as well as loyal readers throughout Europe.

Reporting on Europe from a European vantage point, driving the exchange of ideas across borders and languages: this is the immense journalistic task we’ve undertaken, and the civic adventure to which we invite you. Let’s create the benchmark for a European media of civil society and citizens.