Ideas Alberto Alemanno on Europe in 2020 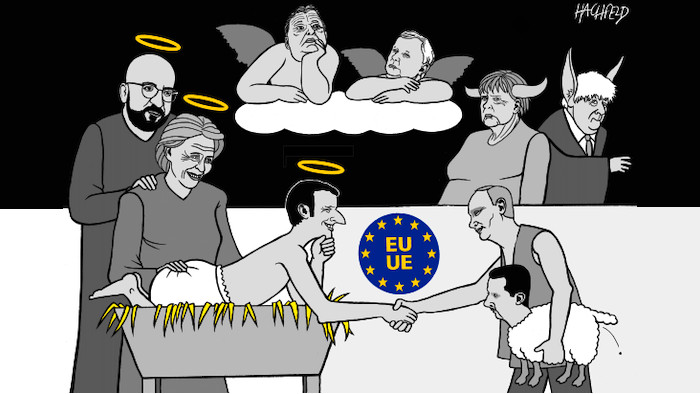 Ideas Alberto Alemanno on Europe in 2020

The new political leadership seems to have overpromised, by generating outsized expectations that might reveal too difficult to manage, notably in relation to the EU commitment to:

Let’s briefly analyse why the EU might have overpledged on the above committments.

1. The Suleimani assassination has already put to test the self-proclaimed first EU ‘geopolitical’ Commission by offering a flavor of what to expect from the new EU foreign policy. The von der Leyen Commission has lost in few hours the major EU foreign policy legacy of the Juncker Commission and its high representative Federica Mogherini: the nuclear deal (JCPOA). The EU is set to remain a bystander of the unfolding of the Iran situation as well as Lybia, the next big civil war at EU’s borders after Syria, with major unintended consequences.

2. By pressing on with a major economic plan to confront the climate emergency, despite Poland’s opt-out from a net-zero emissions target by 2050, the EU might have oversold its European Green Deal. Although its legislative adoption won’t require unanimity, its political acceptance by Poland & other green discontents may come at high price. In addition to the €100bn-Just Transition Fund - helping European economies make the green transition by moving away from fossil fuels – these countries are set to formulate many demands across other contentious policy areas, such as the 7-year budget as well as redline issues such the respect of the rule of law. As the EU will take the green road, the East-West divide will deepen further.

3. On rule of law, the von der Leyen Commission is ‘politically captured’ by the very same political leaders it should hold accountable. Both Hungary and Poland ruling parties were instrumental in the confirmation of Ursula von der Leyen confirmation. Her new Commissioners, from Didier Reynders to Věra Jourová appear too shy and cautious in exercising their oversight prerogatives on the respect of the rule of the rule of law. This will be another major battle line of 2020, set to further accelerate as soon as Victor Orban’s Fidesz will leave the European Popular Party to join ACRE, the EU political party of Jarosław Kaczyński’s PiS.

4. On big tech, the EU set to confine itself to play its global regulator leader’s role thus letting China and US strengthen their market dominance on AI & co. Despite all the talk about the Digital Service Act, it won’t be yet another regulatory regime to give the EU ‘digital sovereignty’ it aspires to and eventually change GAFA’s underlying business model.

5. 2020 will see an acceleration of the Brexit process through a difficult and contested implementation of the unprecedented withdrawal agreement in parallel to rocky renegotiation of UK-EU future relation. As novel and untested trade arrangements will be put on the negotiation table, we might expect the EU-27 to no longer speak with one voice and being more exposed than ever to UK demand.

The imminent Conference on the Future of Europe will further raise expectations, in particular from EU citizens, but reveal incapable - by design - to deliver. The template put forward by the European Parliament suggests there’s a considerable risk that it might soon transform into a top-down experiment masked as bottom-up, participatory moment aligned to Zeitgeist. Achtung!

To sum up, in 2020 the Europeanisation of our societies & economies will persist, while our domestic political systems will continue to pretend to be on the driving-seat of our shared future. Yet as their inherent inadequacy to take up actual challenges will reveal 2020 will be the year in which more will realize that Europe needs its own genuine political system.