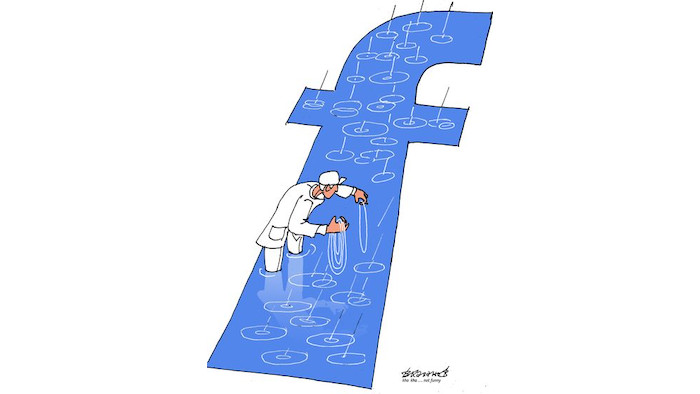 Climate, the economy and immigration. The candidates and parties who stood in the European elections spent millions of euros on election advertising on Facebook. We have checked the contents of around 35,000 adverts from five different countries.

Climate change is a big issue for Sweden and the Greens – but not really for anyone else. Immigration is the main focus for the right wing parties – but not really for anyone else. But the economy is an issue that occupies all the parties. These are the key findings of data analysis carried out on tens of thousands of adverts on Facebook. In order to obtain a transnational view, we worked on this analysis with European Data Journalism Network (EDJNet) partners from Germany, Italy, Sweden and Hungary. These are the main findings:

1. Austria: €600,000 for adverts focusing on the economy and immigration

Roughly €600,000 was spent on Facebook adverts as part of the European election campaign in Austria. Around half of this sum was spent by the Facebook pages of the political parties, party leaders and the parties’ top two list candidates included in this analysis. The FPÖ spent €120,000, more than either the SPÖ (€100,000) or the Greens (€50,000).

There are big differences in the European policy issues focused on by the parties in their adverts. The FPÖ’s main focus is immigration, accounting for around 30% of the party’s advertising spend; the SPÖ is devoting around 20% of its advertising spend to posts about the economy; and the ÖVP is addressing a range of topics, devoting roughly 10% each to crime and the economy.

However, many of the posts – and their associated advertising spend – cannot be assigned to any specific European policy issue. Either they do not contain any text, which means they cannot be categorised automatically, or they focus on domestic politics, or they are requests for support. This kind of advertising accounts for 60% of the identified advertising spend in Austria.

The most expensive adverts: Freedom Party (FPÖ) against Austrian broadcaster ORF and immigration

So far there have been three paid-for posts costing more than €10,000 each (Facebook only gives price ranges such as “€10,000 to €49,999” for promoted content), all placed by Harald Vilimsky’s Facebook page and paid for by the FPÖ.

To some extent, the revelations about former Vice-Chancellor Heinz-Christian Strache and FPÖ chairman Johann Gudenus contained in the Ibiza video sent the European election campaign off in a different direction, with parties placing adverts giving their reactions to the story. Only a small number of advertising messages placed since mid-May have concerned European issues

If we compare the advertising of the national parties sitting together in the various European Parliament political groups, we find major differences between them. Looking at the main parties in the different countries, for example, while Austria’s ÖVP stressed the economy, Viktor Orbán’s Fidesz Party in Hungary devoted half its advertising spend to immigration – a subject that was barely mentioned at all by Germany’s CDU/CSU parties. At the same time, the Swedish People’s Party focused strongly on climate and the environment.

3. The economy as cross-party issue

There are some topics that parties right across the political spectrum spend a lot of their advertising budget on – the economy, with keywords ranging from “incomes” to “corporations”, is one of these. Parties ranging from the AfD to those on the far left all try to get their messages across on this issue.

4. Climate change: a big issue for Sweden and the Greens

The Greens’ advertising strategy focuses on climate and the environment. Most of the other Swedish parties also advertise heavily on these issues – the Conservative Party was the only one to devote less than 20% of its advertising spend to them on the pages included in this analysis.

The parties’ advertising spend reaches its peak in the last few days of any election campaign, as they seek to persuade any remaining undecided voters.Facebook publishes a daily updateon the amounts being spent on Facebook advertising by parties and candidates.

EDJNet partners from Austria, Germany, Hungary, Italy and Sweden have been working together to create an international comparison of the issues being addressed in the election campaign.

Facebook publishes lists of all advertising taken out by Facebook pages.  We analysed the adverts placed by the Facebook pages of the parties, the party leaders and up to three of each party’s lead candidates in the European elections.

The texts of the advertisements were checked for specific keywords relating to European policy issues identified by Addendum. Images and videos could not be analysed automatically, so their contents were not taken into account; any descriptive text accompanying them was analysed, however.

If an advertising text contained any of the specified keywords, it was listed as being about the corresponding topic or topics. This means that the cost of an advert might have been assigned more than once, to different issues. For this reason, the percentages shown in the advertising spends may not add up to 100.

The keywords were selected on the basis of our best knowledge and judgement, and random checks were carried out to test their accuracy as indicators of specific topics. Assignment errors cannot be ruled out, however, so the figures for the advertising share for each topic should be treated as indicative values only.

This is the first election in Austria for which Facebook has pledged to make election advertising transparent. It has been doing this in two ways.

First, every day for the last week of May it has provided an “Ad Library Report”, a daily advertising update showing who has spent how much from which pages. This update shows the exact amounts spent by each Facebook page.

Second, the “Ad Library”. This is a website showing all the adverts placed by Facebook pages. This is important, since internet advertising can be targeted high precisely, meaning that different sections of the population see different messages.

For each advert, the amount spent on it is also shown, in the form of a price range. The most expensive adverts in Austria were in the €10,000 to €49,999 range. The number of women and men in different age groups reached by each advert is also shown.

One important piece of information is missing, however: the group or interest on whose behalf the advertisement was taken out. This information is only available to users who see the advertisement in their Facebook feeds and click on “Why am I seeing this ad?” from a menu. Previous crowdsourcing projects to make Facebook advertising more transparent collected this information from volunteers via a browser plugin. One such project was ProPublica’s Facebook Ad Collector, though subsequent Facebook modifications mean that it no longer works.