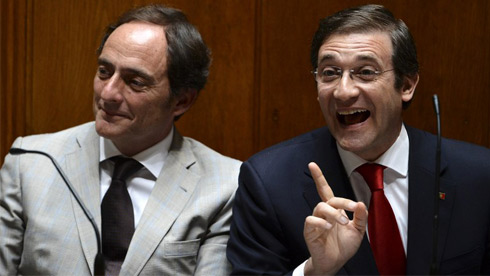 From what we hear in the media, everything is going well again. Truth is, it’s not. Italian cartoonist Altan sums it up perfectly in his drawing of one pig in a tie saying to another: “This crisis is here to stay.” His friend replies: “At long last. A little stability!”

When you’ve been under water for so long, you don’t have a crisis on your hands, you’ve got a “situation”. And everything is still going badly because the political crisis in this strange month of July coincides with the state of emergency we’re living in. It’s ever so slightly discouraging to see our political parties focusing their assessments of the internal and external situation on the “who’s-losing-and-who’s-winning” over the past few weeks, as though we were talking about something other than the threat of a second bailout.

Comedy gets more attention than tragedy. I’m not moralising here, just expressing my amazement. When it comes down to it, the world seems more interested in finding out the name of the Middleton baby than in comprehending the insolvency of a city in which half the electric lighting isn’t working, two-thirds of the ambulances are out of service, over 80,000 buildings deserted (40,000 of which are on the verge of collapsing) and in which the retired are liable to lose their pensions. And this is not some far-flung city located at the other end of the world: it’s Detroit, a city that has known former glory, which lies in the United States of America, a country that still has a functioning federal budget and policy.

Portugal's "national salvation compromise" was doomed to fail, owing more to the pernicious attitude of our political parties themselves than to their leaders’. It is this inertia among party faithfuls that is particularly impressive. There’s a sort of intellectual anachronism about the parties, which talk about a country that doesn’t seem to be ours so much as theirs, about debt as though it didn’t really exist and about money as though we actually had any. The incompetence of those on the right is absurd; the denial of those on the left simply arrogant – towards our creditors, too, whom we ought to be negotiating with instead of berating. According to public opinion polls, the Portuguese don’t want elections, they want a government. The disconnect between the parties and the population seems to be widening, and that’s bad news for democracy.

Various urban legends have been doing the rounds over the past few days.

"The troika are going to give us more time, the rest is just hot air.” That’s probably true, but not as true as we’d like. Bumping the 2014 deficit ceiling up to 4.5 per cent or 5 per cent won’t protect us against austerity measures, though it will pump up public debt to an outrageous 127 per cent of GDP. Will the same coalition that came apart because of austerity now approve more cutbacks?

"The political situation remains unchanged.” Not true. The leadership have been shaken up; Socialist Party General-Secretary José Seguro is the biggest loser these days. Portuguese President Aníbal Cavaco Silva is right when he says time will prove him right, and Prime Minister Pedro Passos Coelho seems to agree. At the end of the day, coalition partner Paulo Portas had to swallow his pride, but he has gained in power.

"A second bailout plan is inevitable, whatever it may be called.” This sentiment has been expressed in the press a thousand times in Portugal. The country will need assistance after 2015, as it’s unlikely the markets will finance us at tolerable interest rates. A 127 per cent public debt simply doesn’t pay in an economy that isn’t growing. But a preventive programme is not (and most definitely not!) the same thing as a second rescue package, which is the biggest threat now facing us.

"The markets have already calmed down.” We’ll see. We won’t be able to assess the ultimate impact of this political crisis until Portugal issues new debt, for only then will the investors who have “real money” make their decisions on the primary bond market.

"Growth is coming." Let us hope so! This is what “the new” government, led by the CDS (conservatives), is promising. The Portas/Pires de Lima duo are going to have to learn to navigate choppy waters to bring about growth again.

"There’s no solution to this situation." Not true either. Solutions have always been the result of a policy mix in Portugal as in Europe as a whole. Europe is making headway, but is missing from the Portuguese equation.

The country is torn between austerity and growth, even in the opinion of economists. But the austerity is a sure thing, even if doled out in doses, while the growth is not. In the meantime, we are going to see new budget cuts. We mustn’t challenge the troika’s assessments (the seventh was hanging by a thread). We need time – and we need to see the parties not go into exile on an imaginary planet inhabited not by people but by illusions.

In the game of chess, Zugzwang means a situation in which the balance between the two players will be undone by the next move – to the detriment of the one whose move it is: he is bound to lose or put himself at a disadvantage. Zugzwang is a German word. The political parties tasked with handling this situation are Portuguese, and they prefer to make their move, to lose everything. Even if the fact of losing is a matter strictly between themselves, a matter from which we are not included – and actually excluded.