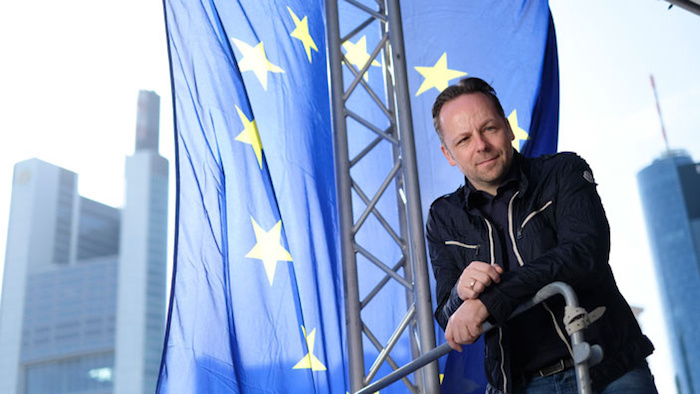 The founder of Pulse of Europe, the grassroots movement that brings together a growing number of citizens taking the streets to show their commitment to Europe and their refusal of populism in a growing number of European cities, explains how PoE was launched and its scope in this exclusive interview.

The Frankfurt-based lawyer describes the Pulse of Europe movement as "a non-partisan citizens’ initiative”. Every Sunday, it brings together since the end of 2016 several thousand pro-Europeans around 40 European cities.

VoxEurop – When and how did you get the idea for Pulse of Europe (PoE)?
Daniel Röder – After Brexit and Trump something simply had to happen.
What does the European Union mean for you?
The most successful union for peace in the post-war era. The only chance to draw out momentum from Europe to solve global problems.
How have your initiatives spread and how do you explain their success?
People want to take part and can do this through PoE right here and now. People feel their concerns about Europe's future are being taken seriously and that they are being talked to on at their level.
How should Europeans feel attached to a European project that is so identified with neoliberalism and the eurozone crisis?
Because there's ultimately no alternative to some kind of European league and this can only be reformed if we preserve it. There are a lot of negative things linked to the EU, because it's so easy to dump problems onto it. That's got to change, the EU must be completely differently mediated.
The European project is today criticised by parties that in many countries have become the leading representatives of the working class. Doesn't your project represent exactly the elites who are being opposed with ever greater success by these parties?
Pulse of Europe is open for everyone who believes in European ideas, independently of party manifestoes, denomination or social background. The "oppressed versus oppressors" view, or vice-versa,
It doesn't matter what background people have – the important thing is that they come. As it happens, Alternative für Deutschland (AfD, eurosceptic and populist), for example, is also an 'Elite project' that is by no means only linked people 'just about managing'. A lot of things have been simplified in this discussion and distorted to suit people's agendas.
How can you counter the anti-European discourse of these parties and groups?
With a lot of positive energy and unshakable commitment to our common values.
Have you already been contacted by political parties or politicians, or have you already thought about structuring PoE as a political party? Are there any plans to do so?
There are plans to turn Pulse of Europe into a party. We are being contacted more and more by parties and politicians and are being invited to participate in cooperation. But it's important to us to remain independent from party politics.
How do you envisage PoE's future?
We would like to remain close to people, to be authentic and dependable in what we do. We still don't know the form that Pulse of Europe will take after the French elections. But we are aware of the expectations people have for us and will turned them into action at a certain time with the necessary sense of responsibility that has been placed in our hands.