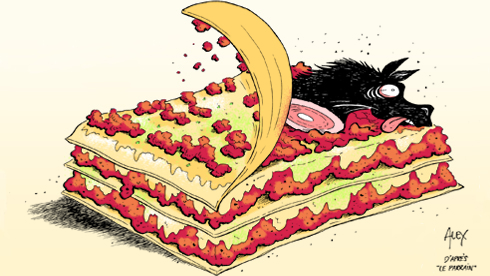 The switching of horsemeat for beef is a spectacular signal that a limit has been reached, says columnist John Gapper.

| Inspired by ‘The Godfather’

Not since Sweeney Todd has there been such uncertainty about what exactly goes into processed meat. This time, it isn’t the customers of the Demon Barber of Fleet Street but Romanian horses.

Since horsemeat is leaner than low-quality beef and contains more Omega-3 fatty acids, it could be a rare case of adulteration that makes the food healthier. Still, it does not say much for the extended supply chain from which supermarkets and restaurants obtain their processed food. If they failed to notice horses, what else has trotted in?

At the top of the market, where organic butchers promote traceability, and you practically know the name of the animal you’re eating, swapping a horse for a cow is unthinkable. But at the cheap end, squeezed by price spikes and growing demand for meat in China and emerging economies, strange things end up in the pot.

That can’t go on. The US auto industry once dealt with suppliers in a similar fashion – squeezing them so heavily that the product deteriorated and the makers went bust. Tricky though it is to forge relationships with suppliers in a world where customers demand low prices, the food industry does not have a good alternative.

In some ways, the concentration of production and distribution in the past few decades, with corner shops being replaced by supermarkets supplied by processors, has been a good deal for the average consumer. It raised the basic level of quality – the content of British sausages and meat pies in the 1970s does not bear much thinking about – and placed a cap on prices.

What do the subprime crisis and the horsemeat scandal have in common? “Both are the unfortunate consequences of globalisation” and of the lack of international regulation, says Dutch daily NRC Handelsblad. The paper notes that in both sectors, self-regulation failed and led to abuse –

Out of 55,000 EU regulations regarding agriculture, 30,000 concern food safety […] but they are difficult to enforce. There are not enough regulators to make spot checks. Politicians are aware of this. The idea is that farmers, food processers and shops will ensure that everything is in order because they can be inspected at any time. It is thus in their interest. The self-regulation relied on to ensure food safety is also prevalent in the banking sector. Political leaders in the 1980-90s are responsible for deregulating and globalising the financial sector. When they realised that this led to abuse, it was too late […] the system is not well conceived and the risks are underestimated.